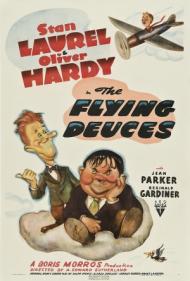 Directed by: A. Edward Sutherland 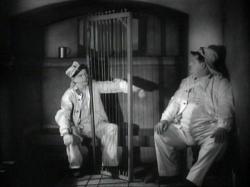 Stan Laurel and Oliver Hardy in The Flying Deuces.

For their contribution to the year 1939 Laurel and Hardy joined the French Foreign Legion. While on vacation in Paris Hardy falls in love with an innkeeper's daughter. But alas she turns out to be married, so Hardy decides to end it all (while forcing Stan to also kill himself as a show of solidarity). They are stopped from drowning themselves at the last minute by an officer from the Foreign Legion who convinces Hardy that a bit of adventure is all he needs to forget his unrequited love.

Of course the bumbling comic duo wreaks havoc while in training camp. They eventually decide to desert but are caught and sentenced to the firing squad in the morning. They make their escape from the tiny cell they are put in and eventually wind up piloting an airplane as the title suggests. The movie ends with a classic gag which is entirely unexpected in a comedy.

This marked the second stint in the Foreign Legion for Laurel and Hardy. They had previously enlisted in the1931 short Beau Hunks.

The most visually creative moment comes when the boys are pulling laundry duty. They are seen washing clothes by hand before Stan goes to hang a shirt on the line to dry. The camera reveals what appears to be several acres of clothes lines all filled with drying clothes. Stan peers down several rows of lines before spotting an empty space on a line a few hundred feet away. The punchline to the sight gag is when we are shown the pile of dirty clothes. It's as high as a two story house. The scene ends with Stan accidentally starting the pile on fire.

Like their contemporaries The Marx Brothers, Stan and Ollie often incorporated music into their comedy. In Flying Deuces they have two musical numbers. One is a sweetly silly impromptu rendition of "Shine On, Harvest Moon" which the boys perform together complete with a bit of the old soft shoe routine. Later, in a jail cell, Stan discovers he can play his bed springs like a harp (see photo) and proceeds to play "The World is Waiting for the Sunrise".

Two other famous comics contributed to The Flying Deuces. Harpo Marx coached Stan on miming how to play the harp and even provided the actual playing that is heard. Former silent star Harry Langdon co-wrote the screenplay.

SPOILER ALERT: The final scene is comically brilliant. Ollie dies when the plane crashes but gets reincarnated as a horse, complete with his trademark bowler hat and mustache. He calls Stan over and as a horse delivers his trademark quip. “Well, here's another nice mess you've gotten me into.” Fade out. The End. 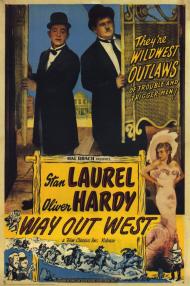