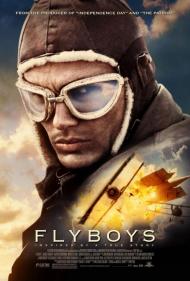 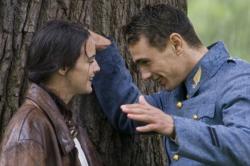 World War I has never received the kind of attention from Hollywood that World War II and Vietnam have. For whatever reason, it and The Korean war have always gotten less screen time. With Flyboys, we have the story of some American young men who join the French air force prior to the United States entering World War I. The film is loosely based on true events.

The most interesting aspect to Flyboys is that none of the men are shown joining with the French for any reasons other than very selfish ones. None join to solely help the French defend their country. None join to stop the spread of Imperialism. One joins because he is wanted by the police. Another joins because it is a tradition for the men in his family to be war heroes. Another joins because he is tired of being a boxer. The son of a wealthy man joins to impress his father.

Flyboys is filled with Hollywood stereotypes. The former-boxer is black. When bunking assignments are given out, the rich white guy objects. Wow, a bigoted, rich white American. How unique! In fact, the Hollywood stereotypes are so obvious that you know who will and who won't die long before it happens. By virtue of his flaws, you know the rich guy will bite it. With the way Hollywood hates to make Christian's into heroes, you just know the religious guy will go down in a blaze of glory singing "Onward Christian Soldiers." The guy who loses his hand will obviously live, because he has already suffered enough. Likewise for the black pilot, by virtue of his skin color, he has obviously suffered already and thus will not be killed.

The characters are identical to thousands from other war movies, and thus Flyboys breaks no ground. Where it succeeds is in the CGI aerial dogfights. They are awesome to watch and just as exciting as the battle for the Death Star in Return of the Jedi. The effects are amazing and seamless from the actual filmed scenes.

A weak love story floats around in the movie like a rubber duck in a tub. It has no where to go and only distracts from the real purpose of the bath/movie. It provides a few moments for Franco to stop his trademark brooding and smile a bit but the movie gains nothing from it.

Flyboys is honest in its approach to why some men go to war but then it quickly disappears into cliche mode. Still, the action in the air is truly exciting to watch, especially on the big screen.