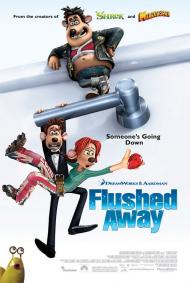 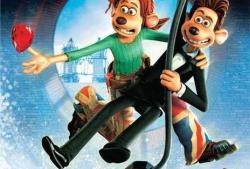 Flushed Away is one of those great animated movies that we use to expect all animated movies to be like. It is fast paced with likable, funny characters and even teaches a bit of a moral. It also throws in a few "in" jokes for those paying close enough attention.

Roddy is a posh rat living in the upscale London neighborhood of Kensington. One day he gets flushed down the toilet by a sewer rat who envies his lifestyle. Roddy soon finds himself in an underground rat city fighting off an evil gang lead by a toad. He also falls in love with a boat captain, Rita, who may be able to get him home.

Thankfully, Flushed Away is not a musical. Although, it does have some singing slugs who serenade a few bars of different songs as Roddy has his adventures. All are used for comic effect. Jackman even gets to sing a bit of a Tom Jones' song, as Rita's grandmother is a huge fan, and very confused.

The movie throws plenty at you. The animation is detailed and things happen that you may miss if you're not watching closely. Early in the movie Roddy is deciding what outfit to wear. One choice he discards is a Wolverine costume.

In true British fashion, it makes fun of other nationalities. Two American tourist mice pop up every so often to do or say something stupid. Some French frogs show up to help the bad British frog. At one point they are instructed to spring into action and attack Roddy and Rita but all the frogs do is raise their hands and surrender.

So often, my wife and I will take our kids to an animated movie and not like it nearly as much as our sons. Flushed Away is one that we all enjoyed. After all, what's not to like when the real catalyst of the entire movie is Prince Charles. (You will just have to see the movie) 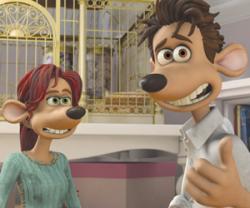 The thing I love about Aardman (who partnered with Dreamworks on this film), the studio behind Wallace & Gromit and Chicken Run, is that they don't just make great animation, they make great movies that just happen to be animated. Too many animated films aim themselves strictly at children, leaving nothing in the movie for the grown-ups in the audience. Flushed Away, on the other hand, contains more than enough jokes for the adults and the children, and without dumbing itself down for anyone.

As Eric said, there are a lot of little details thrown into this movie, some of which will probably go right over the kids' heads. How many little kids are going to get the joke of seeing a cockroach reading Kafka's "The Metamorphosis"? And for that matter, how many children even know who Tom Jones is?

The singing slugs that Eric mentioned are a running gag throughout the movie and are one of my favorite parts. They always show up at just the right moment to provide an added layer of humor on top of the already great humor.

I also enjoyed the way the animators made the CGI animated characters appear to be made of clay as a tribute to the claymation that Aardman is more known for. If you look closely at the rats, you'll notice imperfections and the occasional fingerprint.

The voice work is also top notch, with Hugh Jackman leading the way. His posh Roddy is a far cry from Wolverine. Kate Winslett does a great job as the plucky Rita and Ian McKellen goes so far over the top as the villainous Toad that he ends up somewhere in the stratosphere. Neither are the smaller parts ignored. Bill Nighy and Andy "Gollum" Serkis make a great and bumbling pair as the Toad's henchmen.

Take your kids to this one, but don't be surprised if you end up enjoying it as much as they do. 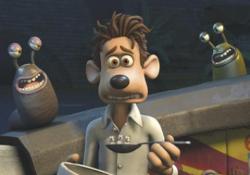 Roddy gets serenaded by singing slugs in Flushed Away.

Flushed Away is frantically funny, and features excellent voice work by the talented cast. The setting – a rat city located in an underground sewer – is a bit off putting, but thankfully it doesn't rely too heavily on toilet humor (except for the gimmick the title refers to of course). The closest it comes to crossing the line of bad taste is when Roddy briefly clings to a brown log as he's being swept down the toilet drain. He screams in queasy disgust before realizing it's just a partially unwrapped candy bar.

The humor and action are well-balanced. Roddy and Rita aboard the Jammy Dodger make like Bogey and Hepburn going down those rapids on the African Queen. Instead of blood sucking leeches we get singing slugs that seem to pop up everywhere.

Eric mentioned how the script pokes fun at both Americans and the French, but to be fair it also takes a few good-natured shots at the British as well. For example, at one point Rita exclaims, “It's impossible!” Roddy responds by making a reference to the World Cup soccer match that is being watched throughout the movie, “England is winning! ANYTHING'S possible!”

As my brothers pointed out, and as we have often commented in our reviews for animated movies, the best ones contain jokes aimed at both children and adults. Flushed Away certainly does. Besides the Kafka reference and Tom Jones tribute (Rita's Grandmother cracked me up) there is a scene with a frog named Marcel dressed as a mime. He performs some funny shtick with a cell phone sure to amuse the kids, while grown-ups will appreciate the whimsical homage to Marcel Marceau, the famous French mime.

Flushed Away, like 90% of animation, is definitely a kid's movie. As someone that normally doesn't enjoy most modern cartoons I was pleasantly surprised at how much I was entertained by this one.