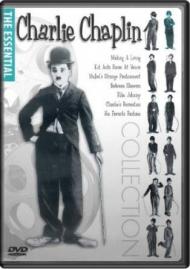 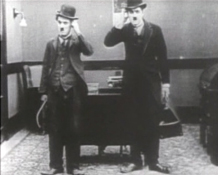 The Floorwalker is fast-paced Charlie Chaplin short featuring his stock character of the Tramp. This time around the Tramp is shopping at a department store from which everyone seems to be stealing. The customers are shoplifting and the manager is embezzling. Naturally the little Tramp becomes embroiled in all of it and causes no end of trouble for everyone, especially himself.

Growing up on Bugs Bunny cartoons as I did, it's easy for me to see now just how much Bugs was based on Chaplin. Chaplin runs around so much in this movie he seems like a cartoon already, but many of his mannerisms are detectable in the wascally wabbit years later. Chaplin always stays one step ahead of the law and the store manager here, and even kisses a couple of men on the mouth, much like Bugs made a habit of doing. His energy is boundless. He runs, jumps and in my favorite bit of the whole short, does a very silly dance for no reason.

The most famous sight gag in the short is one that would be imitated dozens of times over in the future, but which Chaplin was the first to film. He and the assistant manager of the store look similar and when they first run into each other they both mistake the other person for a mirrored image. As one of them moves, the other does too. The Marx Brothers, Bugs Bunny, The X-Files, Vicar of Dibley, and many other movies and shows have all done a riff on this joke.

Another novelty in the film is the store escalator. Chaplin makes good use of it, most famously when he is chased down the up escalator and both he and the manager who is chasing him remain in place. You'll notice though the escalator is sped up so the effect can be achieved, but it's still funny.

Perhaps a minor Chaplin piece, The Floorwalker is still fast paced and funny, and like seemingly all of Chaplin's work, it is also original and memorable. 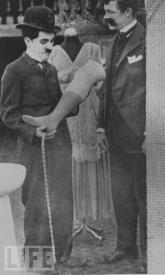 This is one of Chaplin’s faster paced slapstick shorts. It’s not as sublime as his later work but it does manage to produce laughs while telling a simple story. He makes good use of the department store set. I laughed at how fast the escalator was moving, especially for such a short flight up. Chaplin also makes a subtle statement about class assumptions as both the salesclerk and store detective focus all their attention on the Little Tramp while many well dressed customers blatantly shoplift.

Today Chaplin’s sense of humor seems quaint but in 1916 it was considered fairly bawdy. Notice how he lifts the dress on the store dummy for a quick peek. Rather risqué. Laura Ingalls Wilder called him a "vulgar little man" when she saw her first movie on a trip with her daughter to San Francisco.

The close-up of the tall woman playing the female store detective giving Chaplin a knowing once-over with her eyes is funny but odd.  She shows up in the middle of the picture and seems to know what is going on but just walks around giving everyone a bemused stare.  She must have been on her break earlier when all the other customers were helping themselves to the store's goods.

I concur that Chaplin’s ballet inspired dance is hilarious. He was graceful and funny at the same time. And he added so many tiny comedic details. See the way he nonchalantly scratches his leg while being held in the air by the scruff of his neck by the burly store manager; as if to say he isn’t much worried by the situation.

Like nearly all silent comedies The Floorwalker ends with a frantic and chaotic climax.
I agree Scott, Chaplin created the template which all the later silent comics and mirthful cartoon characters imitated. 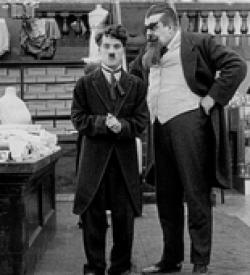 Charles Chaplin and Eric Campbell in The Floorwalker.

A vulgar little man indeed.  Not only does he kiss a couple of men, but he actively admires one guy's butt.  As he is bent over to pick stuff up, Chaplin lifts the man's jacket tails to better get a look.  He moves his hand inches from his butt.  He even puts his hat on it and admires how it looks.

Later, a woman walks by with her skirt lifted inches from the wet floor.  It is enough to get Chaplin's attention and he follows her to the shoe department.  He pushes the salesman away so he can fondle her foot and ankle as he tries shoes on her.  This is one of Chaplin's hornier roles.

The escalator and the mirror  jokes are good, but my favorite bit was when Campbell picked him up by the neck and shook him.  Chaplin looks like a ragged doll.   Like Buster Keaton, Chaplin was only 5 foot 5 inches tall.