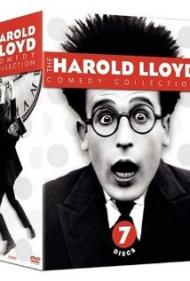 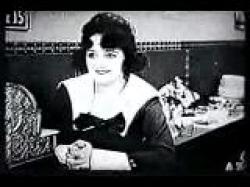 Bebe Daniels in The Flirt

Harold Lloyd appeared in over a hundred short films.  Many are believed lost or damaged.  The Flirt is listed as four minutes long on IMDB and a two minute version can be found on YouTube.  I am not sure if this is the complete short film, or simply all that still exists today.  Either way it tells a quick little story and has a nice punch line.

The flirt loves staring at, and chasing women.  He follows them around, changing to a different girl when he so desires.  He follows one girl to a restaurant, where he sees Bebe Daniels working the register.

After an unfortunate banana peel accident, the waiter quits.  Harold gets the job so he can flirt with Bebe all he wants. His plan nosedives quickly when she introduces the restaurant owner as her husband. 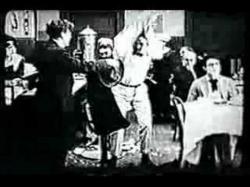 The beauty of Bebe Daniels remains potent nearly a century later. Even the poor quality of the print cannot diffuse it. Compared to the other girls Harold chases around she is a knockout. She is that original Hollywood creation, the movie star, playing a working girl.

Watching this movie I realized something new about Harold’s glasses guy persona. Despite his insecurities he sees himself as a lady killer. Onscreen Lloyd definitely had the highest sex drive of the three silent comic geniuses. Away from the camera is another story. Chaplin’s sex life was legendary.

Oh sure romance played a part in both Chaplin and Keaton’s movies. The Little Tramp and the Great Stoneface usually had sweethearts but Lloyd’s movies are nearly always all about his girl, or girls as in the case of The Flirt. The final scene where Lloyd leaves the restaurant, dejected, only to immediately begin following another girl, perfectly demonstrates his charms as a character as well as Lloyd’s efficient talents. 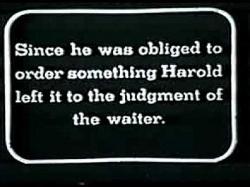 A totally unnecessary title card from The Flirt.

I'm a fan of Lloyd's, but this short is rather disappointing. The big joke is that the girl is married? That and the waiter slipping on the banana peel are the only two jokes in this very short, short. When you look at the films Arbuckle, Keaton and Chaplin were making at this time, this short seems quaintly  simple, even for 1917. They were telling comic stories, while this movie is a one-liner with a weak punchline. It's so short, it almost reminded me of a commercial for something.  All it needed was a logo at the end and a tagline.

Apart from starring Lloyd, there really isn't anything memorable about this film and I have to wonder, if anyone else had played the same part, would both of you really have given this short 3 stars? Lloyd would go on to do longer and thankfully, much funnier work than this.