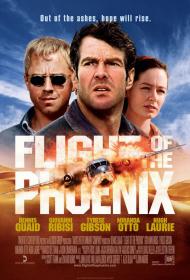 Dennis Quaid in Flight of the Phoenix.

Flight of the Phoenix is one of the worst movies of the year! The pathetic dialogue and stereotype characters are only matched by the predictable and laughable plot.

A group of people become stranded in the desert after their plane crashes. They argue, bury the dead and cry. Then they all set out to build a plane out of the parts from the wreck. They do some more arguing and crying until they all learn to get along. There is a side plot involving some potentially dangerous nomads, but it goes nowhere.

My absolute favorite scene is near the end when Quaid is going to test start the new plane. With his shirt off, he strides, no, swaggers over to the plane. The camera angle is below him and square in the middle of the frame is Quaid's very toned six-packed stomach. He has chest hair but not a single strand of hair is on his abs. Yeah, he is in great shape, but it is such an obvious point to show it off that it's laughable. The very next shot has him sitting in the cockpit with his shirt miraculously now on. You go Dennis!

The movie has a great special effects shot early on of the plane crashing. It is probably one of the best I have ever seen. But then, the action is over and we get all of the people arguing and crying.

The movie makes a point to have a diverse cast. There is the token woman, a couple African Americans, a Mexican American, some white guy with a foreign accent and someone from the Middle East. They all argue until they realize that if they only get along can they build the plane and fly away. It was just like the United Nations; only no one was getting a huge kickback from the oil for food program.

I laughed at the blatant homoerotic scene where two shirtless sweaty men lean into each other. The one lights the other's cigarette with a blowtorch. He then takes a drag on it before placing it in the other's mouth. You go boys!

Ribisi is the only likable character in the whole movie. The sad thing is that your not supposed to like him. He is a dweeby little airplane designer who thinks he knows it all, and only agrees to design the new plane if everyone says please in one of many groan-inducing exchanges of dialogue. There is a plot twist involving his character that makes the other people argue and cry some more. It made me laugh.. 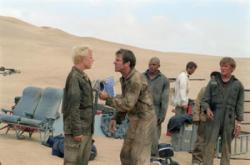 Flight of the Phoenix.

Eric's right, this is a piece of cinematic crap. Why does Hollywood insist on remaking classic movies? The best thing I can say about it is that I was never bored while watching it. But only because it's too unintentionally hilarious. Eric and I had a running commentary going about how badly scripted and predictable the plot was. The movie is, in fact, one horrible cliche after another and it takes itself way too seriously, over-playing every emotional scene (Tyrese overcome with grief after a fellow passenger's death, crawling away through the sand is just one example).

Dennis Quaid, in his best Clark Gable hero mode, tries to elevate the movie above the level of trash, but the stink is just too deep to escape. I'm sure Jimmy Stewart is looking down from celluloid heaven and laughing.

You know a movie is bad when a mildly homoerotic shot of two sweaty men sharing a cigarette is the highpoint.

The ending was so laughably predictable and stupid that I won't bore you with the details. Just stay away! 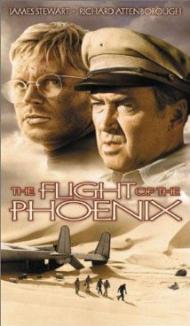