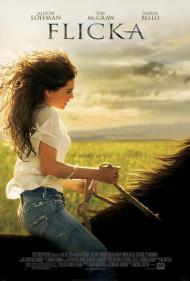 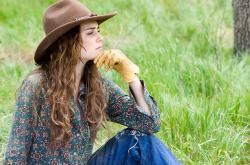 Based on the classic novel My Friend Flicka by Mary O'Hara, Flicka tells the story of a family that own and run a horse ranch in Wyoming. Teenage daughter Katy finds a wild horse and claims her. Over the course of a summer she attempts to tame her.

That may sound like a sweet little animal story but the movie really is about the dynamics of the family. The Dad, Rob, is supposedly a dominating force that scares everyone around him. His wife, Nell, is your typical supporting movie-wife who only speaks her mind when Dad is too blind to see the obvious, "When are you gonna look at your daughter and realize she's you?" Howard, the son, wants to go away to college but is scared to tell his father. Katy, the daughter, is stubborn.

The problem with this movie is that we are supposed to like and root for this family. The director works against that goal. Rob specifically tells everyone, and especially Katy, to not go near the dangerous mustang. Katy doesn't listen of course, and visits the horse nightly, often getting hurt in the process. So we are to see her disobedience as endearing because she, at 15, knows better than her father.

The scene where Howard finally grows balls and tells his dad that he wants to go to college and not run the ranch is done horribly. In a fit, Howard belligerently yells at his dad that he doesn't want to run the ranch. If Rob is the tough, mean dad and boss that everyone says he is, then why didn't he put his son in his place for acting so rudely to his father in front of several people? The scene is way out of place. Rob never even objects to his son's college plans. So what was Howard scared of all of this time?

The big climax of the movie has both children again defying their dad and Katy's life almost hangs in the balance. Big tough scary Dad ends up having an emotional acting scene at the sick Katy's bedside. Although Rob is constantly referred to as being tough and controlling, the movie never supports it. What we are left with is a Dad that is never shown being mean but still needs to learn from his kids about how to be a better parent?

Flicka spends lots of time showing beautiful horses running around when it should have had scenes that supported the character's personalities. How can an audience empathize with children being scared of their parent when the parent is only shown as being loving and cautious? The horse is the catalyst for the movie's plot but it is not the heart of it.