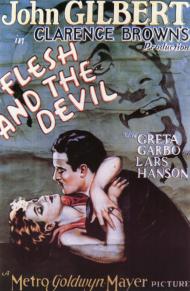 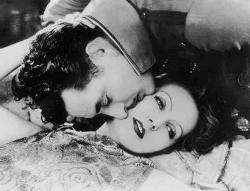 Flesh and the Devil is the movie that made Greta Garbo a legend. She had appeared in a few movies for MGM but hadn’t really caught the public’s attention until she played the vamp Felicitas von Rhaden opposite John Gilbert’s Leo von Harden in the adaptation of the novel “The Undying Past” by Hermann Sudermann. This was her first movie with Gilbert and her first movie with director Clarence Brown. They made a legendary threesome. With the death of Rudolph Valentino in August of 1926 John Gilbert was the undisputed reigning romantic leading man in Hollywood. Still no one could have predicted the remarkable onscreen charisma he would share with the young Swedish actress.

The movie is set in Austria before the First World War. John Gilbert as Leo and Lars Hanson as Ulrich, play soldiers and best friends from childhood. Ulrich has a younger sister named Hertha, who is in love with Leo. She was played by Barbara Kent who, as of this writing, is still alive. She turns 104 on December 16th, 2010 and is probably the oldest living screen actress. She made her last movie in 1935 and today refuses to give interviews about her screen career. No doubt she grew tired of being asked what it was like working with Greta Garbo. Flesh and the Devil is her most famous movie.

Garbo plays a completely wicked woman. Every move she makes is calculated to tempt. She plays the part to the hilt and demonstrates that her face had no bad camera angle. She seduces Gilbert’s rather hapless Leo even though she is already married. Oops, she forgot to mention that little detail to Leo. Her husband, Count von Rhaden, catches them together and demands satisfaction in a duel.

Leo kills her husband and is “advised” by the military tribunal that he go away for 5 years. He leaves for Africa but asks his best friend to look after the widow of the man he killed while he is away. Ulrich has no idea of the relationship between Leo and Felicitas, since a dispute at cards was given as the reason for the pistol duel. Leo returns after 3 years, Ulrich got him an early pardon, only to learn that his rich friend has married Felicitas. This woman has no shame. You can probably guess where the story is heading so I will say no more.

The success of Flesh and the Devil is due to the ineffable chemistry between Gilbert and Garbo. They fell in love during filming and it shows in their scenes together. Garbo literally glows on the screen and never looked more beautiful. The scene where they waltz together is iconic as is their first kiss in the moonlit garden. Clarence Brown, along with his cinematographer William Daniels, accomplished remarkable things with lighting and shadows.

The weakest aspect is the melodramatic plot. This is yet another love triangle between two male best friends and a wanton woman. This was a particularly popular plot device during the silent era. The acting near the climax gets a bit heavy-handed but visually this movie is a feast for the eyes; and Garbo and Gilbert together are unforgettable. 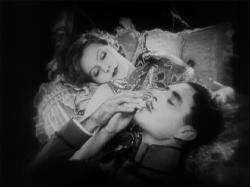 Greta Garbo and John Gilbert, post screen coitus, in Flesh and the Devil

Years before Brad Pitt and Angelina Joli made headlines by beginning an affair while filming Mr. and Mrs. Smith (2005), John Gilbert and Greta Garbo set tongues wagging and gossipers into overtime way back in 1926 while filming Flesh and the Devil. Their on and off screen chemistry is a part of Hollywood lore. In real life Gilbert proposed to Garbo, who accepted, only to leave Gibert at the altar.

The movie often becomes as melodramatic as Patrick wrote. However, whenever Gilbert and Garbo are on screen together, the movie lights up with just the right emotion. The scene in the garden with the match lighting and their first kiss is classic. One of my favorite scenes is when Gilbert arrives on the train and finds out that his best friend, played by Hanson, who has no knowledge of their affair, has married Garbo. He says to Gilbert, “When you know Felicitas better, you will love her, too.” Too late!

The moment in the film that best demonstrates and sums up this movie is when Gilbert comes to speak to Hanson, whom he has been avoiding so as to not be tempted by Garbo. The three have a drink and toast, “To our…undying friendship! And may nothing ever separate us three again.”  As they clink glasses, Hanson’s breaks, cutting him. As he attends to his wound, take note of the look Garbo gives Gilbert. Wow! Finally I get what all the fuss over Garbo has been. When Garbo drinks out of the sacramental wine goblet after Gilbert she makes it look as if she is kissing him very erotically.

As Patrick mentioned, the plot of Flesh and the Devil is nothing special. The idea of sex and temptation being the cause of a man’s downfall was common in early films. The Pastor knows what is going on and says to Gilbert at one point, “My Boy, when the devil cannot reach us through the spirit... He creates a woman beautiful enough to reach us through the flesh.” Men in these early films were often just innocent victims of their libido.

Although Clarence Brown does indeed make for some great direction, this love triangle without the presence of Gilbert and Garbo would be nothing but a soap opera plot device and this movie long forgotten in some movie vault. 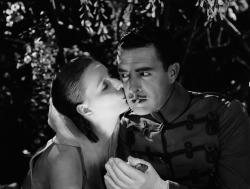 Great Garbo and John Gilbert in Flesh and the Devil.

I disagree strongly. Not even the presence of and strong chemistry between Gilbert and Garbo can rescue this heavy handed, melodramatic, morality play. The plot is pure soap opera. The acting goes way over the top and then jumps 10 feet in the air higher than that. The chemistry and the cinematography does make up for some of the film's weaknesses, but not nearly enough of them.

Eric wrote that in these early films men were often innocent victims of their libido. This isn't a theme that was new to the movies. It goes all the way back to the bible. Adam wasn't guilty of breaking of God's law, he was just seduced by Eve into doing it. The same goes for this movie. Leo isn't guilty, he's fallen under the spell of a wicked woman. In fact, this movie goes so far as to imply Felicitas has cast some sort of spell over both Leo and Ulrich and once she dies, even though neither of them knows that she has died, the spell is lifted from them. When a man desires a woman in too many stories, including this one, it's never the man's own lust that is to blame, it's the woman's desirability, which is a little like an alcoholic blaming his addiction to drink on how good that drink looked in the glass.

Although, having written that, clearly Felicitas is no saint. She deserves blame as much, but not more than Leo for their sin against Ulrich. She seduced Leo into killing her first husband and then happily abandoned him to marry his rich friend. Garbo plays this part well. The moment my brothers mentioned in the garden is a classic. Garbo is panting with sexual desire at Gilbert and he looks as though he can barely stand to stay in his clothes. The flickering match light adds greatly to the scene.

Garbo was a true timeless beauty. Not all stars of that time period would still be considered attractive today (including her co-star), but she had looks that would translate to the modern world without a problem.

Neither of my brothers mentioned the homoerotic overtones in the relationship between Leo and Ulrich. They are constantly standing inches apart from each other and never hesitate to touch whenever possible. While Felicitas and Leo are arguing about staying and leaving, perhaps they should have considered a third option and asked Ulrich if he minded if Leo joined them in marriage. From the way he looks at Leo, I'm not sure he would have objected.

If this movie proves anything it's that good lighting and strong chemistry aren't enough to make a good movie out of a bad plot. You can watch this story any day of the week just by switching on some daytime soap opera.