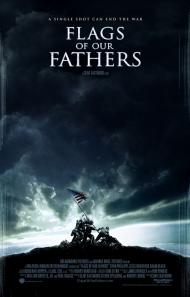 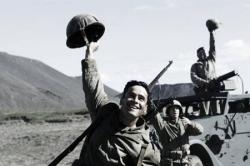 Jesse Bradford in Flags of Our Fathers.

At first, Flags of Our Father resembles Saving Private Ryan. Spielberg is a producer on this film and it features a huge beach landing and assault. Where it greatly differs is that this movie is, for the most part, based on fact.

The movie opens with the three surviving servicemen who were in the famous photo, re-enacting the flag raising at a packed stadium at Soldier Field in Chicago. The movie then flashes back to the men shortly before the beach landing. The movie bounces all over the place as far as a timeline goes. One of the servicemen's sons narrates the movie. Flags of Our Father was based on a book written by James Bradley whose father is portrayed here by Ryan Phillipe.

The story centers on the three servicemen who lived longer than a couple of weeks after the flag was raised on Iwo Jima. With a need to raise money, the government collected the three surviving men from the famous photograph and took them stateside to go on a bond raising tour. Everywhere they went they were mobbed by reporters and photographers. They made speeches and met famous people.

John is a corpsman who saw much gore and death. He is the strongest in the group and keeps a level head throughout. Ira is against the whole tour and ends up drinking to excess. Rene, who is nicknamed Tyrone Power by his commanding officer, takes the tour in like a member of a boy band who lives for the attention. The one message they all agree on is that they are not the real heroes. The ones who died are.

Although this movie, for the most part, takes place 60 years ago, it is very relevant today. Just as Jessica Lynch and Pat Tillman were manufactured into heroes by the powers that be, these three men were forced to represent something that people wanted, but not what necessarily was.

Flags of Our Fathers is a powerful film and brilliant statement on what is a hero and how we treat them. 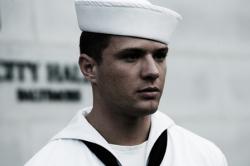 Ryan Phillippe in Flags of our Fathers.

I held off on seeing this movie because the previews made it look dreadfully sentimental and schmaltzy. It wasn't until I began to read the mostly positive reviews, including Eric's that I decided to see it. While I can't get give it the completely wholehearted endorsement he does, I still have to say that this is a great movie.

The action is done well and I enjoy the way Eastwood spells out the story with the fractured timeline. While the acting is generally first rate, Adam Beach as Ira seems out of his depth. And although I feel as if I fully understand Phillipe's character and Ira is pretty well spelled out, Jesse Bradford as Rene is never given the depth of the other two characters. He seems shallower than the other two with hints that there's more going on, but according to the final narration he spent the rest of his life working as a janitor. It's a conclusion that doesn't quite jibe with the small bit of character that he's been given in the rest of the movie.

Eastwood is known for his rapid filming style, using just one take for each scene. This gives a freshness to the performances, but I think some of the acting weaknesses could have benefited from one or two more takes at least.

It will be interesting to see how Clint handles the other side of the story with his next release, Letters from Iwo Jima, due out in February. 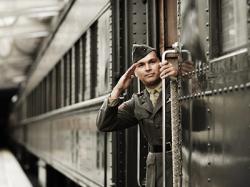 Adam Beach in Flags of Our Fathers.

Flags of Our Fathers is a disappointment after watching Clint Eastwood's masterpiece Letters from Iwo Jima. Both movies are antiwar - war films but this one feels more contrived and cynical. Early in the movie a soldier falls overboard and is left behind to drown by the surging armada of American ships. The point is made that in war the individual is expendable and only the larger mission is of any importance.

This theme is reiterated throughout the movie in the way the powers-that-be don't care about the pesky details of just who raised the flag and when. They just need bodies to represent the All-American GI hero in order to get the public to buy war bonds. That iconic photograph was priceless in more ways than just as a matter of historic record.

As Eric mentioned, the one thing all soldiers have in common is that those who survive laud the dead as the true heroes. I'm sure there is a strong feeling of guilt that accompanies the experience of watching your closest companions get blown to bits while you walk away physically unscathed. Surely giving lip service to this truth assuages the guilt a bit. But in all honesty every man on that island was a hero, regardless of the fickle whims of fate that decide who lives and who dies.

I agree with Scott that the acting is at times almost amateurish. Adam Beach has the most intense role as Ira but he isn't up to the task and turns in quite a wooden performance. Thankfully there are a few old pros like John Slattery around to keep this ship afloat. And while I concur the battle scenes are excitingly staged, I also found them to be quite generic and the CGI battleships that are constantly visible in the background look rather fake.

Eastwood borrows elements from such classics as Hail the Conquering Hero and The Best Years of Our Lives. With Letters from Iwo Jima he created a truly unique WWII film. Flags of Our Fathers, by comparison, feels rehashed and somewhat muddled. Of course in certain moments this movie still has the power to move an audience, especially as we approach yet another Memorial Day. May all our fathers from all of our wars rest in peace. 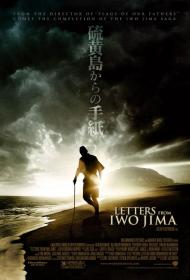