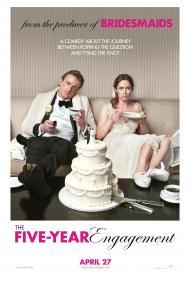 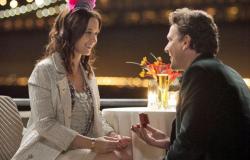 Emily Blunt and Jason Segal in The Five-Year Engagement.

The movie is titled, The Five-Year Engagement, which tells you how long it takes for the characters to make it to the altar, but what it doesn't tell you is that it was filmed in real time, or at least feels like it as the story seems to drag on for half a decade. With a much tighter editing job and the removal of the excess supporting characters this could have been a great romantic comedy, but instead it feels more like a rough cut than a final film.

Jason Segal and Emily Blunt, who previously played  a couple in 2010's Gulliver's Travels, play Tom and Violet, the couple whose engagement is in the title. The movie starts on the night of their engagement. Tom is a sous chef at a trendy restaurant in San Francisco. Violet is looking for a psychology related postdoctoral assignment at Berkeley. Life looks sunny and rosy. When instead of Berkeley, Violet gets accepted at the University of Michigan, they decide to put off their engagement for the two years they expect to be in Ann Arbor. When two years becomes longer and Tom finds the adjustment of moving to Michigan difficult, their walk down the aisle seems to be in jeopardy.

Segal doesn't have typical male lead good looks, but he does have a certain average schlub charm. He doesn't have much range, basically playing variations of his character from How I Met Your Mother in every movie, but he's likable and funny so he makes it work. Blunt is both funny and beautiful. She's charming and an able comedienne. Apart from being way out of Segal's league, looks wise, they make a believable and likable couple that you want to see get together by movie's end.

Since having a couple to root for is the most important ingredient in a romantic comedy, you'd think that would be enough, but unfortunately, that's only one aspect of the movie. The script is filled with far too many supporting characters and scenes that appear to be improvised and should have been cut.

Way too much time is spent with Tom's friend Alex (played by Chris Pratt who isn't nearly as funny as he seems to think he is) as well as several unnecessary scenes with Tom's parents. There's an extended sequence in Michigan where Tom goes back to nature that feels completely out of place and seems to go on for 20 minutes. There are also scenes with Violet's fellow psychologists at U of M that are actually occasionally amusing, but again feel out of place and aren't central to the plot at all.

The movie's best scenes are those that deal directly with Tom and Violet's relationship. The scenes with just Jason Segal and Emily Blunt, work well. They play off of each other and share a believable chemistry. Their relationship is fairly predictable, but then all relationships in romantic comedies always are, but most romantic comedies have the good sense to keep that relationship as the focus of the film without as many, frankly, unfunny deviations.

There's also plenty of vulgar humor. I don't know if they were in the script or improvised on the day, but too many punchlines involve variatons of the words dick and vagina. Shock humor only shocks if it's used sparingly, but here nearly every character uses foul language as a punchline, which is par for the course on a film produced by Judd Apatow, who apparently never found a profanity that didn't make him laugh.

If they put out a director's cut of this movie on DVD that brought the running time down to 90 minutes or less, keeping only the best bits, this movie would probably be enjoyable. As it is though, there are a few nice moments, but they're each surrounded by dozens of cringeworthy ones. 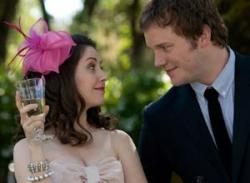 Alison Brie and Chris Pratt in The Five-Year Engagement

A couple to root for is the most important ingredient in a romantic comedy. Unfortunately, I was not rooting for Violet and Tom. After the move to Michigan, Tom literally begins to lose his sanity. He doesn’t just take up deer hunting; he becomes obsessed making odd objects around the house with deer carcass parts. When Violet finds Tom wearing his old bunny costume, as if it were lounge wear, she should have either changed schools or broke up with Tom. He is no longer the man she fell in love with and it is her fault. What kind of couple tortures each other this way and calls it love?

Scott, I think you missed the point of Chris Pratt’s character. Alex and Suzie spontaneously had sex, she got pregnant and they married. They reacted to their feelings as they happened, whereas Tom and Violet over thought their every move. Love is not a script, it is an emotional reaction. This boring couple keeps waiting for the perfect time to wed, as if there is one, while Alex and Suzie have an unplanned, yet seemingly, happy life.

The real question is, would Tom have been any happier in Michigan had he and Violet been legally wed first? Would that legal document made any difference? The answer is, of course, no. This couple’s real issue has nothing to do with their five year engagement. It is simply that they are each in a place they are not willing to sacrifice for the other, so they sacrificed each other instead.

I was not so put off by the swearing as much as I was the less than clever writing. The entire donut study as symbolism for Violet’s and Tom’s relationship is not as astounding as the writers may have thought. Will people wait for fresh donuts, they may or may not get, or will they simply eat the day old donuts available.

The Five-Year Engagement has a lesson to teach. From Tom’s parents, he learns that there is no perfect spouse, relationship or timing. A relationship is not only sacrifice but making the best out of that sacrifice. Sure, life requires some planning but feelings and emotions do not work on a time table. As Violet says to Tom, “I don’t think that we can figure out all of our problems before we get married and I am pretty sure we’ll have some after but I promise you that I will just love you every step of the way.”

It is a nice enough message of love and reality but as Scott noted, it takes far too long to get to that rather simple point. I like Chris Parnell and Kevin Hart but I agree that they are unnecessary supporting players. A tighter script would have been a benefit but a better depiction of this couples affection for each other would have likewise helped. It takes Tom and Violet five years and us over two hours for them to end up exactly where they started.