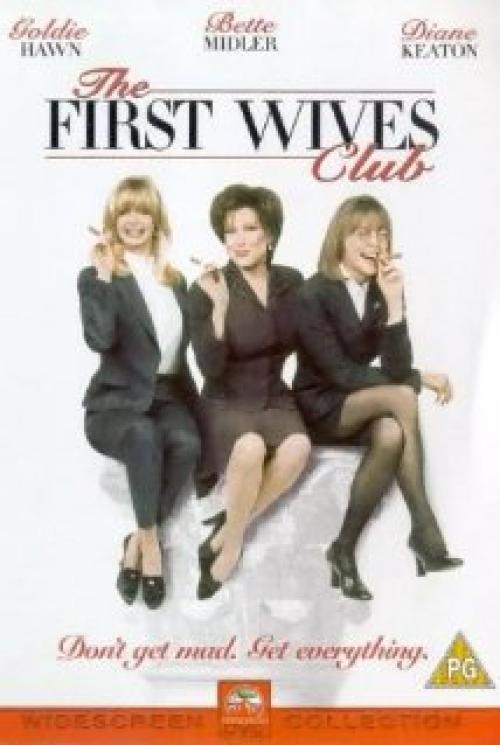 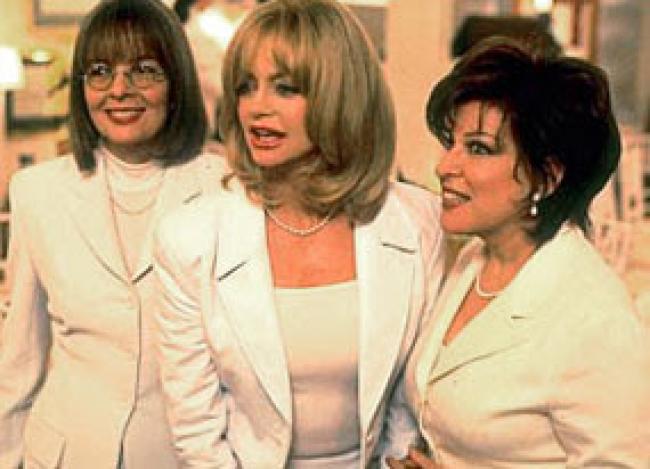 The First Wives Club was a huge surprise box office hit. It has been, to date, the last hit for its three stars Goldie Hawn, Bette Midler and Diane Keaton. Okay, Something's Gotta Give (2003) was a success for Diane Keaton, but otherwise this is the last real impact on pop culture these ladies have made. I recall enjoying it well enough upon its initial release and I wondered if it had aged well.

The story begins with four college girls graduating and pledging to be best friends for the rest of their lives. The film then skips some twenty five years into the future where the women are now estranged and one of the four, played by Stockard Channing, commits suicide after her husband leaves her for a younger woman. Faster than you can say "The Big Chill", the remaining three friends reunite at the funeral.

At first they have little to say to each other but after some drinks and the discovery that all three of them are divorced, they bond. They are each very bitter and angry over how they have been treated by their exes. I was not too far into the movie at this point and already it had hit a snag for me. All four ex-husbands are portrayed as a one dimensional stereotype. They have all left their wives, simply because they wanted younger women. None of the blame for the dissolve of their marriages is put on the three ex-wives.

Elise’s ex leaves her for a young starlet. Annie’s leaves her for their therapist. Brenda explains to her friends of her husband, “My Morty becomes this big shot on T.V... He was selling electronics, right? On our 20th wedding anniversary it hits midlife crisis major. He starts working out, he, he grows a moustache, he gets an earring. I said, "Morty, Morty, what are you? A pirate? What's next? A parrot?" And all of a sudden I'm a big drag. I'm holding him back because I won't go rollerblading.”

The ladies all decide to band together and get revenge on their ex-husbands. What follows is the kind of situations and humorous adventures you would see on Laverne and Shirley or I Love Lucy, only with more drinking. Some of that is cute but these women are not all that likable and I never really felt that much pity for them. Elise is an insecure, vain drunk. Annie is a doormat who uses her daughter against her own father. Brenda body shames Morty’s new girlfriend, who returns in kind. The script tries to get us to pity Brenda as she somehow did not get enough alimony or child support, even though her ex is worth millions. It is more of a plot hole than a believable plot point.

My favorite of the three ladies is the self-absorbed Elise. Her home is decorated with more self-portraits than Norma Desmond’s. She always adores being recognized by fans. She has some of the funniest scenes and dialogue, “You think that because I'm a movie star I don't have feelings. Well you're wrong. I'm an actress. I've got all of them!” She also says one of the film’s most famous lines, “There are only three ages for women in Hollywood - Babe, District Attorney, and Driving Miss Daisy.”

To fully appreciate The First Wives Club, one must have ovaries. This is a chick flick like no other. It cannot decide if the theme is girl power or men are pigs. Either one may appeal to women and put off men. You could argue that they learn a bit about themselves but at no point do any of them acknowledge playing any role in the demise of their own marriage. Yeah, this is single woman’s comfort food. I must have been more forgiving when I first saw it as I would rather watch a I love Lucy rerun than this film again.