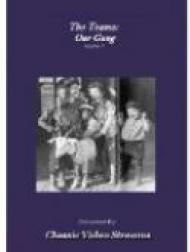 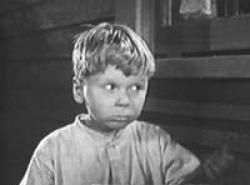 The First Seven Years is an Our Gang short (later known as The Little Rascals) from the Hal Roach Studios in 1930. This was about eight years into the prolific series (more than 200 shorts were produced in 21 years) but just the fifth one to feature Jackie Cooper. The cast of kids changed regularly over the years but this is an early Our Gang talkie - with the poor sound quality you would expect.

The simple plot has Jackie getting romantic advice from neighborhood cop Kennedy on how to woo his girl, the freckle-faced Mary Ann. First Kennedy tells him to be “a caveman”. This backfires as Mary Ann kicks Jackie’s butt. Next Kennedy tells him to “wash his neck and ears, put on a nice suit and bring her some candy”.

Jackie returns only to find another boy, Speck, has moved in on his girl. Mary Ann, loving the situation, suggests the two boys duel over her. So that’s what they do. But first Jackie must find out what a duel is. Chubby says a duel is what is at the other end of a football field. No, that’s a goal. Finally, set straight, Speck and Jackie don tin scraps as metal armor including an old birdcage for a helmet and then have at it with swords provided by Mary Ann.

Of course they end up in a wild melee with everyone in the gang getting stabbed and all the clean clothes hanging on the line being mutilated to shreds. After Jackie licks Speck the old fashioned way, with his fists, Speck gets his father involved. Thankfully Jackie’s Granny comes charging to the rescue.

The gang in this picture includes Jackie’s baby brother Wheezer, neighbor kid Farina, and Pete the dog with the ring around one eye. I think it is cool the way these movies always included at least one black child at a time when the country was so segregated. Allen Hoskins, that played Farina, had been appearing in Our Gang shorts since the silent days of 1922 when he was just 2 years old. Stymie and then Buckwheat would later inherit his part as the token black kid in the gang.

As a kid in the 1970’s I enjoyed watching these movies as a time capsule to an earlier, more innocent era. I wonder just how ancient they must seem to today’s kids. The First Seven Years is a decent entry in the series even though its cast is not as well remembered as the later gang of Alfalfa, Spanky, Darla and Buckwheat are. 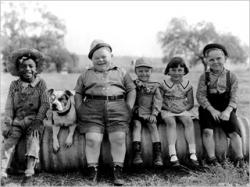 I am not sure if this is one of their more popular shorts or merely one that has been shown the most but I have seen it several times and enjoy it just as much every time I watch it. I always like Officer Kennedy offering Jackie advice and then hiding his face in embarrassment when Mary Ann beats up Jackie. The children playing in the yard remind me of playing in our grandmother’s back yard when we were kids, and I even have a story of our grandmother coming to my brother’s rescue from an adult.

Our Gang/Little Rascals celebrated the eternal carefree beauty of childhood. I sometimes worry about today’s handheld device obsessed generation and roll my eyes every time I see a child with a cell phone or gadget occupying his time. What ever happened to children playing in their yard using their imagination?

As I am tripping down sentimental lane, I will elaborate on something Patrick noted. My brothers and I were raised without a racist bone in our bodies. Seriously, it was not until I went to public school that I was taught that blacks and whites are different. A small part of our color blindness could be attributed to Our Gang/Little Rascals. There was always a black child or two participating in their adventures and at no point did we distinguish him from the other kids. As Patrick wrote, the country was segregated when these film shorts were featuring children of different colors without bias.

So many movies can be traced to Our Gang. The Goonies (1985) is several generations removed from these classics. In both, a group of kids have free reign and very little adult supervision. Instead of Chubby there is Chunk. One thing that truly separates them is that Our Gang featured very young actors. Patrick mentioned Farina being only two in his first role, as was Bobby 'Wheezer' Hutchins. Wheezer was all of five when he made this short. Sean Astin was 13 when he made The Goonies.

Our Gang and The Three Stooges live in a special place in my heart as they were my very first exposure to such old films. Patrick and I watched these old black and white comedies as children and later Harold Lloyd shorts that were turned into a television show. They truly began our fascination with old films. 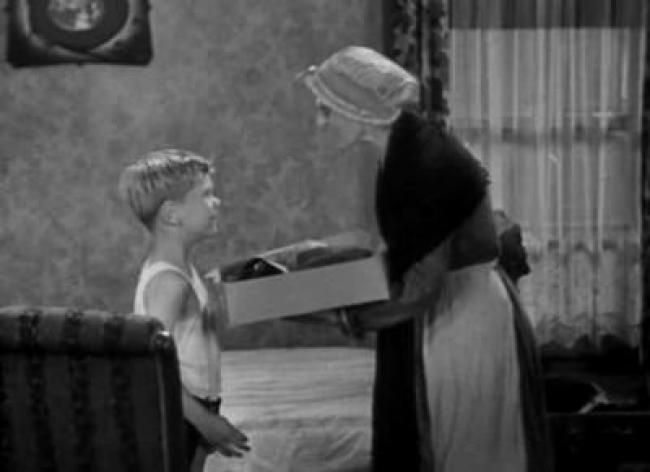 Jackie Cooper and Joy Winthrop in The First Seven Years.

Unlike Eric, I have no memory of ever seeing this particular Our Gang short. I do remember watching shorts with the gang on television, but I only remember watching the later shorts featuring Spanky and Alfalfa. Although there are similarities between this early talkie and the later Little Rascals, this one is a little cruder than those slightly more polished ones.

As Patrick said, they made over 200 of these shorts, of which this one was the 96th overall and just the 8th talkie. It's actually a partial remake of an earlier 1925, silent Our Gang short called, "Ask Grandma." Although in that earlier short, Granny takes a more direct involvement and teaches Mickey (that short's version of Jackie) how to box. What I hadn't realized is that while, as Patrick noted, the series lasted 21 years, the familiar lineup of Spanky, Alfalfa, Buckwheat, and Darla was only in them from 1936 to 1939, although Spanky had been a castmember since 1931.

I suppose I should be more forgiving of the acting since these are all such young kids in a cheapie short, but they're not very good. Donald Haines as Speck is particularly bad. Jackie Cooper is the star, but he too isn't particularly deft at delivering his lines. Allen Hoskins and Mary Ann Jackson deliver the best performances of the kids. Reportedly, they filmed this short 4 times, in 4 different languages. They didn't dub the kids, they taught them their lines phonetically in Spanish, French, and German, oftentimes writing their lines on blackboards just out of camera shot. Given the poor quality of the kids' acting in their native language, I'd hate to see how bad they became in one of the different languages.

Despite the relative crudity of the comedy and the acting, there is plenty to laugh, or at least chuckle at, here. My favorite joke comes at the end when Wheezer complains that he never catches a break because he has to give Jackie back his knife, since Jackie didn't die.

As Eric wrote, the Little Rascal shorts will always have a special place in our memory, but at least for me, that place is reserved for the later cast. This early cast was all new to me. 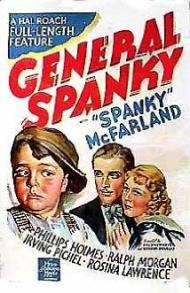