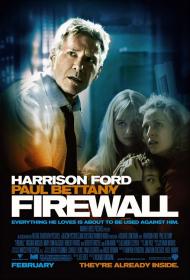 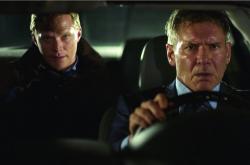 Oh Harrison, how far you've fallen. As one of the movie idols from my childhood I will always hold a special place for him in my movie going heart, but even my loyalty and admiration for his work and films of the past can not overcome the plot holes and unoriginal storyline of Firewall, his first film in 3 years.

Ford plays Jack, a computer security expert at a small bank in the process of being taken over by a much larger one. A family man living in a spectacular lake front home in Seattle (although the film was shot in Vancouver), Jack is supposed to be your average upper middle class husband and father. But before you can say Flightplan, Jack's wife and children have been kidnapped by Eurotrash criminal Bill Cox (Bettany) and Jack is being forced to rob his own bank to secure their release. And before you can say Air Force One, Jack has taken matters into his own hands and decides not to play by Cox's rules any longer.

The holes in the plot are many and they range from the small, like a computer security expert whose password is Lark (any computer expert will tell you never use a password that has meaning and always include numbers and punctuation marks), to the very large where a group of criminals who can do absolutely anything when it comes to invading Jack's home and computer system at his office and yet still need him to actually rob the bank. And while I don't want to give away the ending, why the hell would the gang of criminals bring along the family dog? If you've seen it you know what I mean, if you haven't then trust me, it makes no sense and mainly because the screenwriter doesn't even try to explain it.

With the plot being weak at best, the only thing to look forward to is the inevitable moment where Jack says his equivalent of, "Get off my plane!". Unfortunately it takes far too long for Jack to finally realize that he's Harrison Ford and to start kicking British butt. By the time he does it's too late. I'd stopped caring.

As for Bettany, he continues the Hollywood tradition of having a British actor play a villain. Sadly however, he's not a very threatening one.

Apart from shooting one of his own men and giving Jack's son a cookie with peanuts in it (because why not add in Panic Room as another movie to rip off a plot device from) despite knowing that the boy has an allergy, he never really seems that intimidating and you just know that, despite Ford having 30 years on him, before the end of the movie he's going to get his ass kicked.

Robert Patrick and Alan Arkin both have inexplicably small roles in the film. They add little and while they're both good actors, if nothing else it would probably have reduced the budget to hire unknowns in what are virtually cameo appearances.

While a movie featuring big name stars being dumped in February should have been a clue to me that Firewall was going to be a dud, for Harrison's sake I held out hope that I was wrong. Too bad for me as well as him, that I was not. 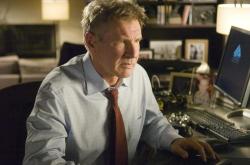 If I were bored at home flipping the channels around and came across Firewall I would have probably kept flipping. The only reason to see this movie is for all of us loyal Harrison Ford fans see the man in action again. It has been 3 years since his last movie, Hollywood Homicide, and that one was not much better.

The problem with Firewall is that we expect great things from Ford, and to be honest he does a good job here playing his pat "normal" man caught up in something sinister. Other than occupation, Jack Stanfield is James Marshall from Air Force One or Richard Kimbal from The Fugitive or Richard Walker from Frantic.

This leads to Firewall's worse crime. There is not an original moment to be found in it. Ford, Bettany and everyone else in the movie play one dimensional stereotype characters. Ford and Madsen are that wonderful movie couple that are obviously well into middle age yet love each other like newlyweds. Bettany is that Hollywood bad guy who just happens to know everything except how to fight. He loses to a 60 years old banker. His henchmen are all there to die. You can almost guess in which order they go.

Without the star power of Firewall, it would not have even been a decent television movie. The final scene of Ford walking up the road with his family is almost laughable. They have just gone through so much yet there they are, just a normal happy family out for a walk. This is the kind of film you expect to find on television starring Antonio Sabbato jr and Dean Cain.