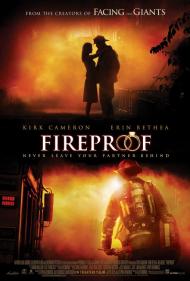 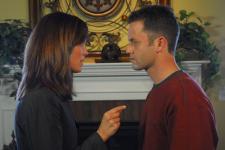 Alex Kendrick is an ordained pastor at the Sherwood Baptist church. Not content with merely preaching from the pulpit, Alex decided to reach a larger congregation through the use of film. He founded Sherwood Pictures. Fireproof is his third film. He has directed all three. He and his brother Stephen wrote all the screenplays. Fireproof is not their first film to get released in theaters but it did get the most publicity because it stars one time teen idol, Kirk Cameron.

Caleb is a married fireman whose marriage is on the brink. He and his wife both work long hours and rarely see each other. When they do pass in the kitchen, they argue over what the other has or has not done around the house. When his wife finally says she wants a divorce, Caleb starts seeking advice form those around him. He starts talking about faith with a fellow fireman. His Dad gives him a book of 40 things to do over 40 days to strengthen his marriage. His wife has meanwhile found herself attracted to a doctor at work, and Caleb finds his work cut out for him.

Fireproof features several well done action scenes of firemen rescuing people. The best parts, for me, were the arguments between Caleb and his wife. They were so true to life. Some of the things they said to each other really hit home with me. Alex Kendrick is married with six kids. I guess he knows marriage as well as the next spouse.