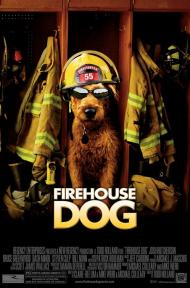 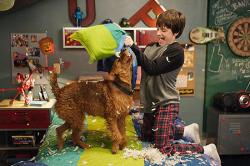 From the child only having a single parent to the dog teaching everyone to be better people, Firehouse Dog contains nearly every family film cliche imaginable, yet still manages to entertain.

Rexxx is a movie star dog who has appeared in such hits as Jurassic Bark and The Fast and the Furriest. After a mishap during a skydiving scene, Rexxx finds himself lost, but is assumed dead by his owners. He ends up befriending a boy, Shane, whose mother is AWOL and father is a fire captain at a local Fire Station. After the initial adjustment period, Rexxx, now named Dewey, becomes the stations mascot.

Many sub plots fill in the cracks. A series of arson started fires have been ravaging the neighborhood. One such fire killed Shane's fire fighter uncle. Shane's dad has the hots for a female Fire Captain from a different station who just happens to have a daughter the same age, and goes to the same school as Shane, who just happens to have a pet dalmatian that looks similar to a dog that Dewey was once in love with.

The fire house is filled with likable people. There is the family guy who is married with 4 young kids. There is the over eager rookie. There is the girl fire fighter who acts tougher than every one else but cleans up like a model when she has too. There is the old fireman who likes to cook but can't boil water. The movie oozes cute.

The tension comes from the mystery of who is setting the fires. Make one guess a half hour into the movie and you will probably be right. There is also some emotion about whether Shane can keep Dewey. Of course, you know all will be well, but it's all done seriously enough that you can invest yourself into it without feeling too manipulated.

The film's only misstep, is when Dewey's original owners catch up to him and decide to give him a reward. His owner opens a bedroom door and their on Dewey's bed are three poodles for him. Why, in a kid's movie, is sex being used as a gift? Even if it's for a dog, it is inappropriate. Sure they're bitches, but are they hos?

Josh Hutcherson is the child star of the moment. I am not sure why. He was in Bridge to Terabithia last month. He has no unique quality that makes him at all memorable. He must have a great agent.