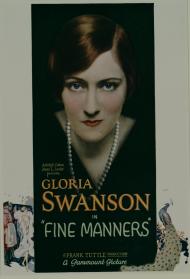 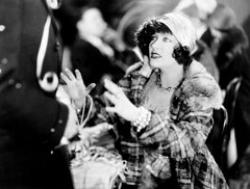 Fine Manners was an important film in Gloria Swanson's career as it was her last film for Paramount studios until her grand return 24 years later in Sunset Blvd (1950). She left to produce her own movies. This was not the best of her movies with Paramount but it does demonstrate her star power and appeal.

Swanson plays chorus girl Orchid, a flapper who likes the night life. As the movie starts, she and her controlling brother are among the throngs of people celebrating New Year’s Eve in the streets. Meanwhile, Brian, of the upper crust is at a party of his own. It is staid and boring. He decides to have his chauffer drive him somewhere there is life. His car ends up in the crowded streets with the adorable Swanson smiling through his car window.

He is smitten and they go on a date. Her brother does not like Brian, thinking he is just a wealthy man trying to buy her sexual affections. Brian introduces Orchid to his mother who finds Orchid uncouth. Brian reveals that after he returns from his 6 month business trip, he intends to marry Orchid. His mother will give her blessing if Orchid moves in while Brian is away so that she may teach Orchid some fine manners. How will Orchid take to her refining education and will Brian like who Orchid blossoms into?

Fine Manners starts light and breezy with Swanson looking quite attractive as a flapper. Her eyes are big and she smiles often. She has a parrot that answers questions either “Hellno” or “Hellyes”. Later in the film the word “damn” is used. Scandalous! Unfortunately, the tone becomes melodramatic with poor Gloria caught between her angry brother and a depressed fiancé. The bedroom drama portion slows everything down, although it does give Swanson some moments to ham it up.

The best this film has to offer is Gloria Swanson at the height of her star power. She is in most of the movie and brightens the proceedings every time she is on screen. She could sell a joke, handled the romantic drama with practiced ease and looked sexy, especially when wearing only her slip. No other film of hers, that I have so far seen, better demonstrates her famous line from Sunset Blvd, “…we had faces.” 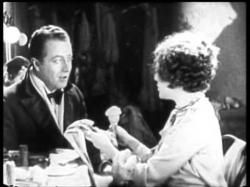 Swanson isn't just the best thing this film has to offer, she's the only thing it has to offer. Her co-star, Eugene O'Brien, whose career ended with the dawn of the talkies, demonstrates little charisma or explanation for his short-lived popularity during the silent era, which saw him star opposite some of the biggest actresses of the age. Apart from the two leads, the only other two characters of note are Aunt Agatha and Buddy, Orchid's brother. Neither of them make an impression. Apart from Swanson, it's only the parrot who generates any laughs.

As Eric wrote, this movie works best during the lighter first half. Swanson and O'Brien share an amusing date and Swanson is as charming as she's ever been, demonstrating an exuberant charm with boundless energy, literally skipping and cart wheeling around, rarely standing still. The second half, with O'Brien leaving the country for six months feels contrived and leads to the failed melodrama. The mix up over how O'Brien wants Swanson to behave could be cleared up with one conversation, but instead almost leads to the end of their relationship.

The tired plot of poor girl falls for rich guy, so common in silent movies, does the story little favors, neither do the echoes of Pygmalion. Again, it is only Swanson's presence that brings anything remotely fresh to the tale. Without her presence this would be just another forgotten silent movie. 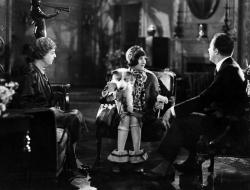 Gloria Swanson was a great star. Her presence was enough to keep my attention throughout Fine Manners, although I agree the script is lacking in originality. Orchid Murphy is one big juicy role and Swanson eats it up with relish. I also concur that it works much better as a comedy than in its hackneyed attempts at melodrama. The parrot is worth a chuckle or two, and I really enjoyed the scene where Orchid meets her boyfriend's aunt for the first time (see photo). At one point she sprays some perfume and proudly blurts out, “Jockey Club! Two drops o' that costs your right eye.”

Speaking of the aunt, she was played by Helen Dunbar, about whom Swanson wrote in her autobiography, “She had been there when the egg cracked open and I emerged. The first day I ever wept buckets on cue, at Essanay in 1915, Helen Dunbar had said to me, “You know, young lady, one day you'll be a good actress,” and I replied, to my everlasting shame, “Yes, I know. I'm going to be very famous.”” A statement that turned out to be as prescient as it was immodest.

The brother, Buddy, was played by Roland Drew. He went on to a minor career in the movies and is perhaps best remembered for his role as Prince Baran in the Flash Gordon movie serials. He was strikingly handsome with a believable brotherly resemblance to Swanson. He doesn't have much to do but he nonetheless left an impression with his brooding intensity.

Fine Manners was popular with audiences in 1926 and it's easy to see why. The direction is brisk and the story never lags. Sure the plot was creaky even then but Swanson's star was at its absolute peak wattage and she energetically carries the picture from start to finish. But then Gloria Swanson practically invented the concept of the glamorous movie star. In the 1980 television documentary miniseries called Hollywood, Adela Rogers St. Johns says, “To this day, whenever I hear the words Movie Star, I still think of Gloria Swanson.” Watch Fine Manners to learn what she meant.