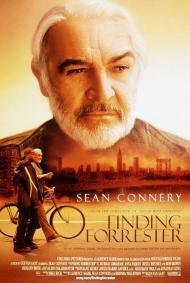 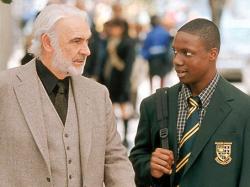 If you want to know about this movie, you probably want me to tell you everything from the beginning. How it started, what happened during it, and how it ends and all. But I'm not going write all that. Firstly, because I hate all that, and secondly, this is a good enough movie for you to go and see for yourself. I'm just going to tell you about this madman stuff that I happened to like.

Sean Connery is a great actor. A great actor is somebody who doesn't look like they're trying too hard to act and they still end up doing a good job. He plays this writer, William Forrester, who once wrote a really good book, but then never wrote another and ended up hiding away for thirty years, way the hell up in the Bronx, because he didn't want a bunch of phonies telling him what he meant in his writing. The only problem with Sean Connery is you never forget, no matter what role he's playing, that he's Sean Connery. He never does accents and stretches too far beyond his range. You'll never see him playing some flitty guy with a Brooklyn accent. But that's okay, this character fits nicely into his range.

The young writer, Jamal Wallace, played by Robert Brown, is also an interesting character and is really good, considering that this is his first movie. He plays this genius who's afraid to reveal his genius because he just wants to fit in with his ignorant friends, who only value basketball, and not book smarts.

Anyway, these two characters get together, and Forrester ends up helping Jamal with his writing and stuff. Jamal ends up in this rich, private school in Manhattan. He thinks he's there because he scored so high on his test scores and stuff, but of course, it turns out that the stuck up snobs at his new school are only interested in basketball too.

That's sort of the plot, nothing too original, but that's really beside the point. The best parts of this movie are the scenes with Forrester and Jamal, together in Forrester's apartment. The chemistry between the two is what really makes this movie so good. And the moments they are together remind me of watching a play. Two actors, small set, just talking. That's a good thing.

Anyway, it's a really good movie, even if the end is a little too neat and tidy. I mean, all of a sudden, When the school finds out that Jamal did write these stories that everybody is accusing him of plagiarizing, and all these phonies at the school that have been ostracizing him, suddenly start applauding him, like he's been their best friend all along.

But don't let that stop you from seeing this movie. Like I said, see it for the characters, not the plot. Anyway, that's what I think. 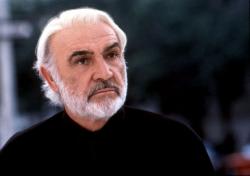 Finding Forrester, more than anything else, more than it is about coming of age, or race relations, or basketball, or connecting with another human and learning how to live again, is about writing. Yes it deals with those other subjects, but when distilled in its purest form, Finding Forrester is about putting words on paper in a way that will excite awe and envy in others. It is about reaching into yourself and finding your truth and then explaining it to others in a way that is both poetic and entertaining.

Sean Connery is the reclusive writer William Forrester living in the Bronx who is befriended by a sixteen year old kid named Jamal Wallace who yearns to be a writer (Robert Brown in an extraordinary debut performance). As their relationship develops the old man gives the boy guidance and inspiration and in return learns to go out into the world again. The character of the aging reclusive Salingeresque writer is a familiar one, see Field of Dreams for another example. Connery however is perfect in this role. His disheveled yet still charming looks, his worldliness, his accent all contribute to this role, yet it is his unexpected vulnerability that sticks in ones mind.

Sure, as Scott already mentioned, the supporting characters and plot are unoriginal and there are no unexpected curves to ride out. Still this movie is a winner. The scenes between the two leads are why this movie was made and they are exceptional. Gus Van Sant creates just the right atmosphere in the writer's apartment, the lighting, the piles of old books lying around, the ancient typewriter, dusty stacks of papers and photographs. The young Jamal is an intriguing and believable mix of cocky teenager and retiring genius in the making, and Robert Brown easily holds his own against the venerable Mr. Connery.

F. Murray Abraham, Busta Rhymes and Anna Paquin are all sufficient in throwaway roles, which are never given any depth. But in the end none of this matters. Finding Forrester is a movie that even given these flaws is so completely charming that I recommend it wholeheartedly. 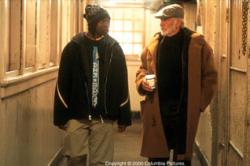 I liked this movie. It was well acted and I cared for the two main characters. I rooted for both of them. However, not a whole hell of lot happens.

Most of the movie takes place in the Bronx. You know, that serene little place where everyone is nice and polite to each other. Except for Connery's grumpy old man, everyone in this part of town is as sweet as a Norman Rockwell painting. There's a little swearing and we see some unattractive lots. However, this movie setting is pretty much Leave It To Beaver with asphalt. The movie lacks any edge. The few confrontational scenes this movie has are luke warm and never reach the dramatic boiling point that they could have.

Much like in his Cast Away review, Patrick cannot see the Forrest for the trees. This movie is not about writing as he spent a whole paragraph detailing. This movie is about coming to terms with ones own gifts and abilities, and conquering the fears that hold us back from displaying them for all to judge. Jamal spends time playing basketball with 'friends' he's scared would reject him if they knew just how cerebral he really was. Forrester spends his life hiding from a public that he feels judge him too much. Their relationship gives each other the courage to unlock their cages. Forrester's cage being his apartment and Jamal's being the basketball court. In fact my two favorite scenes were when the characters freed themselves. Jamal missing the free throw and Forrester riding his bike.

This is a well written movie. Connery as the surrogate father is his best dramatic role I have seen him in. Brown is good as the insecure prodigy. If only Gus Van Sant had given the movie a bit more grit.