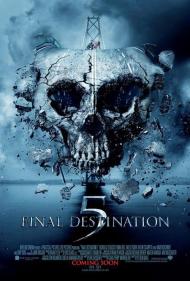 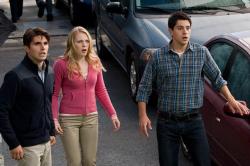 Horror movies can be fun when they're done right. With their thrills and chills, they're often the type of movie to evoke the most visceral response. Usually they go one of two ways. Either they're dark and  disturbing or they're over-the-top and fun. It doesn't take long to figure out which direction Final Destination 5 is going once the blood starts flying.

Like the four movies preceding it, this installment is about a group of youngish people who escape death when one of them has a premonition of impending disaster. Only Death doesn't like to be cheated, so one-by-one the survivors start to die in as bloody and gory a manner as possible. A chance for survival presents itself when they learn that if someone else dies in their place, then death will be satisfied. The question of course is, can any of the leads survive until the end credits?

This time around the opening disaster takes place on a suspension bridge that collapses when a group from an office are traveling across it on their way to a corporate team-building retreat. One of them, Sam, has a dream that it will collapse and he sees the death of all his work mates, including himself, except one. Because of his vision, he is able to get some of his co-workers off to safety.

The writers provide the cast just enough personality to make them human, but just barely. The real fun in the movie is the carefully constructed death scenes. Remember the old board game, Mouse Trap? You would build a complicated structure where a series of events would end with the trap being dropped. The death scenes here are like that. Here's an example. A loose screw falls onto the balance beam where a gymnast is practicing. She steps on it, falls off and on to the mat where an electrical cable has been dripped on by water. The gymnast gets a shock, falls again and knocks over a barrel of talcum powder, the created cloud blinds another gymnast who is on the uneven bars. She falls from the bars and lands in position that not even a gymnast should be in, with bones protruding from her body.

It's in these scenes of death and carnage where the movie excels. You can see when something bad is going to happen, but the movie builds up to the deaths so well that you'll be squirming in your seat waiting for it. And while it might seem morbid to be entertained by such a thing, it's all done with a sense of fun and tongue in cheek.

This is definitely not a movie for the squeamish. There is blood and guts flying everywhere and for once, I recommend seeing a movie in 3-D as it really adds to the fun. When metal bars get driven through a character's head, you're not getting the full effect if you don't see it in 3-D.

Although there's no real need to have seen any of the earlier movies to enjoy this one, you will enjoy the ending more if you've seen at least the original. It's kind of cool that they tied this movie to that one, but I have to say that I was a little disappointed by the final resolution of it all.

The producers of this movie have said that if it's a hit, they'll probably film two more sequels back-to-back. While that might seem like a bit much, if they can bring the same sense of fun, while maintaining a real sense of suspense the way they do with this one, I wouldn't object to much to seeing them. 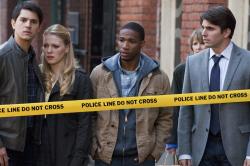 I rarely enjoy horror gore fests, but Final Destination 5 is so over the top in the death scenes that none of it is intended to be taken seriously.  I found myself laughing out loud every time one of the characters bites it.   This is one of the funniest dark comedies I have seen in a long time.  I just read a comment on a site that wrote that this was one of the more serious entries into the series.  Oh come on!  Each death is a punch line to a set up of foreboding doom.  I have not laughed so hard at a movie in years.

All credit goes to the director, writer and whoever else came up with the manners of death the characters must face.   As Scott wrote, you can see almost every demise about to happen, but you are not exactly sure how it will happen.  It helps greatly in the build up to the gruesome moment.

The cast is full of unknown actors who were cast more for their looks and moderate salaries than talent.  Nicholas D'Agosto spends the entire movie with the same look of concern.  To demonstrate that he is actually trying to act, his eyes occasionally get a bit bigger when he really wants to show empathy.   Emma Bell is a bland blonde who seems to disappear, even when on screen.  She has zero screen presence.  Her looks are so generic her role could have been played by a blonde wig on a broom stick.   Miles Fisher stands out because his eye brows compelled me to stare at them.  I swear to God they moved on their own.  Are those guinea pigs living on his forehead?

I am not sure if the horrible casting was intentional, but it sure made the film funnier.  Since none ever came across as real people I never felt anything for them when they went tits up.   In fact, I rooted for them to die, and laughed hard when they did.