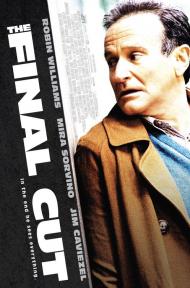 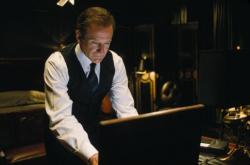 Robin Williams in The Final Cut.

The Final Cut is reminiscent of an old style science fiction short story from the golden age of sci-fi. It is similar in theme and style to something that might have appeared in Amazing Stories. It's science fiction but it is a far cry from the big budget movies that are more typical of the genre lately. It's more cerebral and atmospheric than action packed and like those stories of old, it puts characters first.

The time is an unspecified date in the future and one of the hottest products on the market is the Zoë implant. Placed inside an unborn fetus, the implant records every second of a person's lifetime; everything they see, hear, or do is recorded. Upon death, a Cutter takes the recorded lifetime and edits it into a Rememory (a movie of the person's life), which is played at the funeral and then stands as a record of a person's life.

Alan Hakman (Williams) is the hottest cutter around. His specialty is taking disagreeable lives and editing them down into something everyone can be proud of watching. As a rival puts it, he turns bastards into saints. What Hakman has kept secret from everyone is that he is haunted by a violent incident from his childhood for which he blames himself. It is this incident that has shaped his career and kept him correcting other people's mistakes.

Robin Williams, who is a very likable actor, really only seems to have two different characters. His zany madcap comedy guy and his serious, straight faced one. Here he is playing his serious character, but it works quite well for the part and he carries the movie completely on his shoulders. Similar to his character in One Hour Photo (without being psychotic), Hakman lives his life through watching others. He has a girlfriend (Sorvino) but it is very casual as he keeps her at arm's length.

The main thrust of the plot involves a group, led by a former Cutter (James Caviezel), who oppose the very idea of Zoë implants and are trying to get their hands on the chip of a deceased Zoë executive that Hakman is editing. They're hoping that an unedited version of his life would show the corruption inside the company and cause a scandal large enough to bring down the corporation. Hakman, who lives by the strict code that all Cutter's agree to, refuses to cooperate with them.

There are some small weaknesses in the story. At least one major surprise in the story is fairly easy to see coming, and the way in which the surprise is revealed is pretty coincidental. It also seems odd how little the world has changed in this movie. Since presumably the technology to create these chips would only be available now or in the near future, and some of the people whom Hakman edits are in their fifties and sixties, that would put the year of this movie well into the latter half of this century, and yet the clothes and technology, apart from the editing machine, all seem the equivalent of what we have today. This doesn't really hurt the story so much, but it seems an oddity.

Perhaps the most impressive thing about this movie is that it is from novice director Omar Naim. And not only is this his feature directorial debut, but he wrote the script as well. If he can do this well on his first outing, I can't wait to see his follow-up. 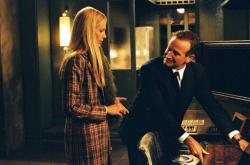 Mira Sorvino and Robin Williams in The Final Cut.

I recall reading a World War II memoir that began with a note to the reader. The Author wrote that this was his story as he remembered it. He acknowledged that he may have accidentally exaggerated some things and forgotten others. This was his story as he could remember it. The lesson of The Final Cut is that our memories are not necessarily the truth, they are how we see the past. Alan explains, "My job is to let people remember what they want to remember." While Fletcher says, "It's a strange profession you have, isn't it, Alan? You take people's lives, make lies out of them."

The weak part of the film for me is that people seem very casual with their entire lives being available for someone to look at. The cutter experiences them having sex, going to the bathroom, masturbating and every other personal moment in their life. Would this not change all kinds of laws and legal processes. They could look back and find crimes in peoples past. They could look back and see what promises were made and broken. The only complaint this movie makes about memories is that it is an invasion of privacy to look into someone life and experiences things about people who are still alive.

The cast is good but the roles are fairly bland. William's has made some interesting choices recently in film roles. It shows a philosophical side to him, but I miss his comedy. He manages a couple of one liners here, "Is Suicide under Self-Help?" But this is hardly a comic role. Caviezel plays a reactionary whose motives are a bit obscure. The movie briefly mentions early on that it is anti-God in that only you and God are privy to your memories. Had the movie further explored the religious angle it would have at least given a greater motive to the people objecting to the implants.

The Final Cut is a great film to watch with some one you enjoy talking to. It raises questions but it does not make for an overly entertaining film.