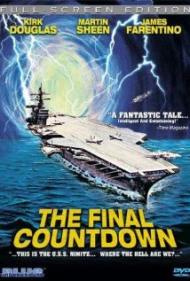 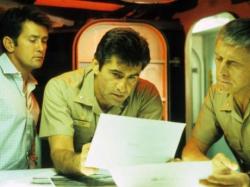 The Final Countdown asks both of these questions. It also has the addition of (then) modern technology going back in time as well. If you are a history or military buff this film is for you. Shortly after leaving port in Hawaii, the U.S.S. Nimitz runs into a strange electrical storm that sends the entire nuclear aircraft carrier back in time to the day before the Japanese bombed Pearl Harbor.

Martin Sheen plays Lasky, a civilian aboard the ship of nearly 6,000 servicemen. He and the captain, played by Kirk Douglas, along with a couple of other officers, must figure out what has happened to them after the carrier passed through the storm. All communication from Hawaii has stopped. The radio is only picking up golden oldies from 1941. Some reconnaissance jets witness a private yacht get strafed by some Japanese fighters. The jets engage them in one of the most lopsided aerial dogfights ever put on film. The two yacht survivors and a downed Japanese pilot are picked up by helicopter and brought aboard the Nimitz.

Meanwhile, other recon has been done and they discover the huge approaching Japanese fleet. Although the prisoner of war causes some trouble when he is on board. The real meat of the story is the question it proposes. If you are the captain, do you utilize the power you control, 80-90 aircraft, to help change the outcome of one of the greatest defeats in U.S. history, or do you leave it alone? You could save thousands of lives but at what future cost?

The Final Countdown was produced by Peter Douglas. It was intended as a family project with his father and brother starring. Michael was however, still obligated to The China Syndrome when filming began. The most interesting casting for me was that real sailors aboard The Nimitz were used in small roles and as extras. I was stationed with a sailor who appears in this film. He even has a line of dialogue.

Although I found myself enjoying The Final Countdown, it works better as a conversation than it actually does as a film. The movie is book ended by the presence of a mysterious person who is revealed at the last moment. It is not hard to guess who it is, but it does present a better scenario. Had the film been told entirely from his perspective, the movie could have had a much better narrative. As it is, The Final Countdown is little more than a strip show. We get excited by the possibilities, but in the end have to find satisfaction somewhere else.

Kirk Douglas in The Final Countdown.

The Final Countdown plays like a recruitment tool for the U.S. Navy. In fact it was used as such. The maritime force sponsored the premiere and displayed the movie's poster in branch recruitment offices. As Eric mentioned, many of the extras seen in the movie were actual sailors and pilots. Unfortunately too much time is spent showing these various fighter jets taking off and landing on the aircraft carrier. Military buffs may find this fascinating but for the average viewer it gets a bit monotonous.

Kirk Douglas was nearing the end of his run as a leading man. He was 63 years old at the time and had been making movies in Hollywood since 1946, the year after WWII ended. Incredibly enough he is still living as of this writing. He turns 97 in December and last appeared in a movie in 2008. It's worth noting that both he and Martin Sheen have famous acting offspring. In fact, Michael Douglas and Charlie Sheen would work together in Oliver Stone's Wall Street in 1987.

The time travel aspect is fairly intriguing but like all time travel movies the logic doesn't add up. You just have to accept the idea that each of us has an infinite number of selves that can coexist at any given point in time. The mysterious benefactor's identity is one example. SPOILER ALERT: At the beginning of the movie, in 1980, he is an old man but is also, at the same time, aboard the ship as a younger man.

Also there is never any attempt to explain the phenomenon of the bizarre storm that sends them through time in the first place. And why does it conveniently show back up just as the battle is about to begin? And how does it know to deposit them back at the right date in 1980? Again, these are all details it's best not to think about.

The most entertaining aspect of the movie is the juxtaposition of technology and weaponry as it existed in 1980 against WWII era technology and weaponry. Since this film was made with the complete cooperation of the United States Military it includes dozens of actual aircraft. Military geeks can probably name them all. Today they would use CGI to recreate all these airplanes. Personally I prefer the days when they used the real thing. It is the most noteworthy aspect of The Final Countdown as it captured the state of the art of war in 1980.