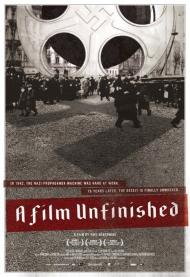 Note the cameraman in the back ground.

A Film Unfinished (Shtikat Haarchion) is an investigation into a never released Nazi film.  After World War II a vault was discovered with thousands of films shot by the Nazi's.  One was labeled Ghetto.  The film was made in May of 1942 in the Warsaw ghetto.

The film shows the ghetto's desperate, starving Jews and well-to-do Jews.  It shows a dirty kid begging outside a store while a wealthy looking Jew walks past.   It shows the crowded living conditions of some and the comfortable lives of others.

Yael Hersonski's uses several sources to try to discover why it was made.  A Jewish leader in the ghetto wrote in his journal about the filming of the movie.  Many of his entries are used as narration.  Four different survivors of the ghetto watch the film and make comments.  Three of them look away when the movie shows the burial of decimated naked bodies.

Most interesting is a transcript from the trial of the Nazi officer in charge of the ghetto.  A testimony by a witness also acts as narrator.  He was one of the cameramen who filmed it.  He pleads ignorance to everything, using the usual answer of I only did what I was told.  He claimed they were just instructed on what to film and not what it was to later be used for.

It was clear that it was a piece of propaganda, but for what purpose?  Why show the Jewish haves and have not.  Years later a reel of out-takes was discovered.  It shows different takes of the same scenes.  The shots were clearly all set up and posed.   As the witnesses watching the film attest.  No one ate or lived as well as some are shown in the film.

The entire point of the film is to show a contrast of rich and poor Jews.  Well dressed Jews attend a formal dinner and go to the theater.   Poor Jews dig through garbage and steal to survive.   The staged scenes are obvious as the the out take reel shows some cameramen caught on film by other cameramen filming.  Another out-take scene shows a nice dressed, well groomed woman looking completely uncomfortable standing next to a dirty rag of a woman.  Is she acting the part or does she understand something else is at hand?

If there is anything to learn from this film is that we must always question information provided by a government.  Nazi Germany was the first regime to use propaganda to such great extent, but it is certainly not the last.  We will never know exactly what the purpose was of this film. It is a mystery that never gets solved.  It did however, create documented proof of the horrible conditions suffered at the hands of the Nazi's.