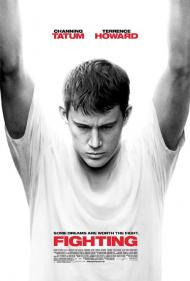 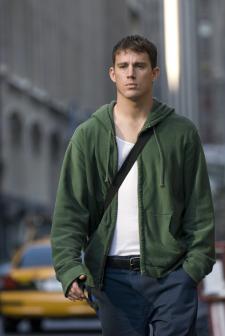 Channing Tatum reteams with Writer/director Dito Montiel in Fighting. They previously worked together in A Guide to Recognizing your Saints, in which Tatum, in a supporting role, stole the movie from it's lead, Shia Lebouf. Unfortunately, the results are not as good.

Shawn is a nice young man from Alabama trying to make a living on the mean streets of New York City. He sells bootleg CDs, books and DVDs. He gets into a fight when someone tries to steal his goods. Witnessing the fight is Harvey, a would be con man, who offers Shawn the chance to get paid to fight in an underground street-fighting circuit. The movie features several brutal brawls. Shawn always ends up bruised and bloody after each. In between Shawn and Harvey become friends, and Shawn falls for a beautiful waitress named Zulay.

The movie is full of ridiculous coincidences. Shawn first meets Harvey on the street, but then just happens to come across him in a restaurant the next day. Shawn first meets Zulay when he sells her a fake Harry Potter book on the street, and then runs into her at a nightclub she works at. The biggest coincidence is when at that same night club, he also runs into a guy who Shawn's Dad coached in Alabama, in wrestling. They do not like each other and of course they end up fighting in the end.

For a movie titled Fighting, this is a very boring watch. The friendships, the romance and the rivalry all ad up to very little. None hold any amount of interest. The one and only thing this movie has to offer is Tatum doing the type of role he has become known for, playing a tough kid from the poor side of town. Sure he is being type cast, but he is good at what he does. However, after watching this snooze fest, I think it is time he tried some other kind of roles.