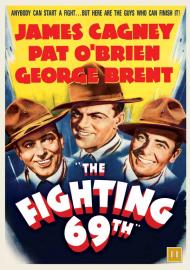 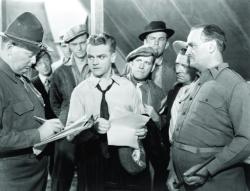 James Cagney in The Fighting 69th.

Although Pearl Harbor was still 22 months away in early 1940, when The Fighting 69th was released, the escalating war in Europe was causing a noticeable swelling in patriotic fervor in the United States. The Fighting 69th turned out to be one of the biggest moneymakers of the year. This Word War I drama about the legendary regiment of New York-Irish soldiers stars real life pals James Cagney and Pat O'Brien along with a who's who of Warner Bros. stock players including George Brent, Alan Hale, Frank McHugh, Dennis Morgan and Dick Foran.

Pat O'Brien plays real life hero Father Duffy, whose statue still stands in Times Square. Cagney is the fictional Jerry Plunkett, a hardnosed braggart from Brooklyn who seems to go out of his way to alienate himself from every other member of the regiment. Quick with his fists away from the front lines, Plunkett turns out to be a coward when it comes to actual trench warfare. So much so in fact, that his terrified behavior causes the deaths of several of his fellow soldiers on more than one occasion. Yes, the corn grows tall in this one. Fortunately the veteran cast and the excitement of the battle scenes are enough to hoe a clear path threw the field.

Plunkett, imprisoned and awaiting a death sentence for his traitorous cowardice, gets one last chance to redeem himself by the saintly chaplain. Cagney and O'Brien made a great team. Cagney's cocky pugnacity bounced off of O'Brien's serene yet down-to-Earth honesty like a super ball on concrete. They are both supremely effective in the rousingly sentimental climax. It doesn't matter that it was visible from the opening credits. When Plunkett is finally vouchsafed a hero's death on the battlefield, projectile tears should spring from the eyes of any war veteran or patriotic American; for as cornball as this movie is, it is also extremely moving.

The soldiers are all familiar types. There is the tough-as-nails sergeant, the brave officer, the sensitive poet and the wisecracking fat guy. In one form or another these characters have fought their way through every major war in cinema history.

This movie features several riveting battles, yet one of my favorite scenes takes place early on when the Fighting 69th is still in training. They meet a regiment of soldiers from Alabama and then practically re-fight the Civil War. That is until the noble Major breaks up their scrimmage with a morale boosting speech about how they are all fellow Americans fighting on the same team now.

The Fighting 69th is nothing more than a good old-fashioned war picture. And that's enough. 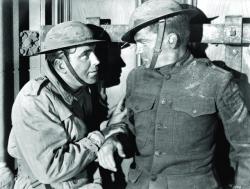 Pat O'Brien and James Cagney in The Fighting 69th

When I was in the Navy, I shared a room with a guy from the south. Whenever the Civil War was brought up, he would get a stern look on his face and state, "We did not lose, we are just regrouping." I thought of him during the fight scene between the boys from Alabama and the east coast 69th. They ask each other if they remember how they shot the pants off the other. None were alive at the time but it is an apparently good enough excuse to fight.

Speaking of dialogue, I liked the time period vernacular. James Cagney, "Don't give me that malarkey." Alan Hale, "Snap it up, you mugs." Pat O'Brien, "You're your own biggest sucker." No one talks like this today.

Another dated aspect is the positive representation of Christianity. Just before the 69th is shipped overseas, Father Duffy drops to his knees and has a lengthy prayer that begins, "Almighty God, in thine infinite mercy grant me, thy servant, the wisdom to guide my young flock through the trials of war..." Today, the only time Hollywood shows a Christian in prayer is in an exorcism film or as the butt of a joke.

This is a great role for James Cagney. He always played tough guys, but as Jerry Plunkett he is all talk and attitude. He first comes across as a tough smart ass but when push comes to shove he is chicken shit. During the fight between the southern boys and the 69th, he only watches from the sideline. When Father Duffy asks him to help break the fight up, Plunkett responds, "Not me pal; You don't get medals for that kinda fightin'!"

The trench scenes are tense. The first time Plunkett took fire surprised me. His utter stupidity and ignorance make him a bigger detriment to his own men than the enemy. When on guard duty, he stops by a cafe for a beer. As Patrick explained, Father Duffy sets out to redeem Plunkett. To an officer who wants to get rid of Plunkett, Father Duffy says, that the 69th, "Makes men out of cowards, not cowards out of men." This is the tale of a man's journey to redeem himself.

It almost seemed that Hollywood knew that the United States was about to enter into another war and was preparing the country to accept it. The Fighting 69th is about a soldier finding courage. This was just one of several films made just before World War II that contained not so subtle messages. In They Met in Bombay (1941) Clark Gable plays a thief who becomes a war hero. In You'll Never Get Rich (1941) Fred Astaire eagerly joins the army and gets to dance with Rita Hayworth.

Either way, The Fighting 69th is a great film that contains one of my favorite performances by James Cagney. Although he avoided going to church, Plunkett truly becomes inspired by father Duffy when he fearlessly addresses and prays with the wounded men in the bombed shelter. As the old saying goes, "There are no atheists in fox holes." 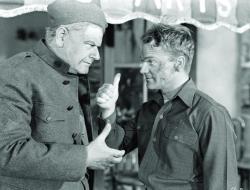 Alan Hale and James Cagney in The Fighting 69th.

Patrick mentioned the statue of Father Duffy, played by Pat O'Brien here, that stands in Times Square. In one of those odd coincidences, it stands not far from the statue of Broadway impresario George M. Cohan, who of course was played famously by James Cagney, his co-star in this film and in 8 others across their long lifetimes, including Ragtime, the final film for both of them in 1981. Good friends in real life, O'Brien once said of Cagney that, "Jimmy can steal a scene by lifting an eyebrow."

Cagney definitely steals this movie, as he did most of the time. His innate likability that we've seen in other films helps keep the audience on his side, even when he's at his most cowardly. Where we might hate his character were it played by someone else, it's impossible to feel that way about Cagney, even when we disapprove of his actions. Of course, it also helps that the Hollywood ending is so obvious. We know he will do the right thing and turn out alright in the end. In some ways the story arc is the reverse of another Cagney/O'Brien film, Angels with Dirty Faces. In that film Cagney is fearless right up until the end, when he turns yellow (or at least pretends to, depending on how you interpret it) right before dying, while here he is a coward right up until the end, when he performs bravely right before dying.

Although not as rare an all female cast, this is at least an uncommon film where there are no female speaking parts. The only women to be seen are extras in the French village when the 69th first arrives in France. Apparently there was a part written for Priscilla Lane as a girlfriend of one of the men, but it was cut before any of her scenes were filmed. As this helps keep the story at a taut 90 minutes and isn't needed for the main thrust of the story, it was probably the right decision.

One thing that did strike me while watching was how old these new recruits were. O'Brien refers to them as "boys" during one of his prayers, but most of them look to be at least in their 40s. It doesn't damage the film, but it is noticeable. Not that this movie is going for realism. It's inspired by the real Fighting 69th, but the events depicted are fictitious.

World War I has never been as popular a subject in film as World War II, but with the war in Europe looming in 1940 it's hardly surprising that Hollywood looked backward for inspiration with films like this one and Sergeant York. They may have little to do with real war, but they made damn fine entertainment.