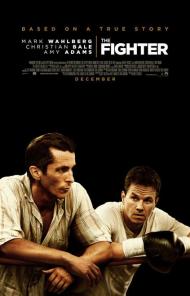 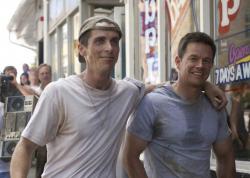 The Fighter tells the true life story of boxing brothers Dicky Eklund and “Irish” Mickey Ward. Eklund once knocked Sugar Ray Leonard down in the ring (or did he trip?) but his career quickly spiraled into drug abuse and eventually a stretch in prison. He trains his younger half brother and eventually Mickey gets a shot at the welterweight title. Along the way there is a bit of romance with a bartender and plenty of family dramatics.

I don’t think there is a better (or more popular) sport for the movies than boxing. It makes for excitingly violent visuals and has built-in drama and suspense. Will he or won’t he get up off the mat? The problem is that there are already so many great boxing movies that there is little left to be discovered. The Fighter, while not bringing much new to the genre, does feature a few good fight scenes, especially the climactic one; but where it truly shines, and where most of the movie takes place, is outside the ring.

The acting is first rate and keeps the story from becoming mawkish.

Christian Bale captures the nervous energy and predatory eyes of a crack head as Dicky. He’s the annoying older brother that always wants to be the brash center of attention but is really the emotionally needy one. He is perfectly cast since the part calls for a hammy performance and Christian Bale has never shied away from playing to the back row. Look for him to snag a Best Supporting Actor nomination from the Academy as they have often recognized showy parts like this in the past.

Mark Wahlberg downplays his part as Mickey, torn between family loyalty and his new girlfriend who urges him to take control of his career away from his mother and brother. Wahlberg’s acting talents may be limited but again, like Bale, he is perfect for his role. Physically he looks like a fighter and handles the boxing scenes like a pro. The two of them make believable brothers and have an ease together that transcends the screen.

Amy Adams plays Mickey’s girlfriend Charlene. She is a tough cookie that doesn’t take any shit from anyone. Even standing up to Mickey and Dickey’s overbearing mother and their 7 homely sisters in one of the movies’ best scenes. She stretches herself in a role you wouldn’t normally associate the Enchanted actress with and pulls it off brilliantly right down to her Lowell, Massachusetts accent.

Melissa Leo completes the quartet of major characters as Alice Ward, Dicky and Mickey’s chain smoking, too tight clothes wearing mother. She has the difficult task of making the audience identify with an unsympathetic character. Her motives are often transparently self serving but Leo gives us glimpses of her underlying vulnerability. She so clearly loves her children that you come to appreciate her even if you wouldn’t want to spend much time around her.

The Fighter works because of the performances of these four actors. It is a solidly entertaining boxing movie that will have you cheering for Mickey Ward - and his brother Dicky - to succeed. 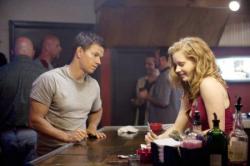 Mark Wahlberg and Amy Adams in The Fighter

The reason boxing movies remain so popular is that they are such a great metaphor for life.  Each of us have struggles in our lives and we've all been knocked down a few times.  Boxing movies are a great way of showing us that no matter how much life beats us down, we have to keep on getting back up and continue the fight.  As you say though Patrick, there have been better boxing films, but The Fighter is still an enjoyable and very well acted one.

Bale is the kind of actor you don't really see that much of anymore.  He reminds me of an actor from the 1970s.  A larger than life actor who buries himself in the part, often physically transforming himself to play a role.  A modern day Pacino or De Niro, if you will.  You hit the nail on the head Patrick when you used the word "showy".  He's a very showy actor.  He's great, but subtlety is not his strong suit.  Having said that though, he does manage to take a drug addicted character, the like of which we've seen dozens of times before in other films and given him a distinctive voice. I would certainly have no problem seeing him pick up the Supporting Actor Oscar.

Although this is a "boxing" movie, it is also very much a movie about family.  Mickey and Dickey come from a large, dysfunctional family.  The mother is selfish and domineering, with most of the daughters seemingly cloned from her.  What I liked about the way the story handles the family is in the way that it resolves the conflict without becoming melodramatic or overly sweetened.  It's more about people learning to live with each other than it is about anyone having a change of heart or dramatically changing, which makes the resolution much more realistic.

Wahlberg has definitely grown as an actor.  As you imply Patrick, he doesn't have the widest range, but he's developed a naturalness in front of the camera that works for him.  It helps that he's playing one of the few likable people in the entire movie, although even him you want to slap and tell him to stand up for himself against his family.

Too often these days, movies that generate awards buzz aren't very entertaining.  Sure they contain great performances or fancy camerawork, but they're either too long or too depressing or too boring.  The Fighter is that rare movie that's getting lots of critical attention and is certain to be nominated for a slew of awards and yet still manages to entertain. 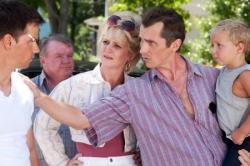 And the award SHOULD go to...Christian Bale.

The Fighter is the best movie I have seen this year, and this is the 85th film I have reviewed that was released in 2010.  As both my brothers wrote, the performances are great.  The story is a perfect Hollywood underdog screenplay.  The best aspect for me though, is the direction.

I felt very involved in the final fight.  David O. Russell directs it in a manner as to build the emotion.  He shows Micky in the ring, then the mother in the crowd, then Dicky yelling from the corner.   I physically moved when each punch landed.  I was so caught up in that fight I wanted to stand and cheer.  I have not been that absorbed by a scene in a long time.

Russell also succeeds in subtle ways.  Micky is brave enough to get into a ring with someone who is trying to beat the shit out of him but he is scared to stand up to his family.   Even when he does he does it cowardly.  Look at the scene in prison where he yells at Dicky.  Russell has him yelling from the other side of the room as he is about to leave.  Micky never stands up to his mother unless someone like Charlene initiates it first.   Russell demonstrates Micky's insecurities with simple, yet very effective, direction.

My brothers are right about Bale's performance.  It is showy, but it is showy because that is the person he is portraying.  Like Scott, Bale reminded me of Deniro, who physically changed his appearance for Raging Bull (1980).  Bale had parts of his scalp shaved to have the thin haired look of Dicky.  Although Dicky is larger than life, Bale has some nice nuances in his performance.  After coming out of prison, and being drug free for months, Bale carries himself slightly different than he did earlier in the movie.  He most certainly deserves the Academy Award, and perhaps Russell does as well.