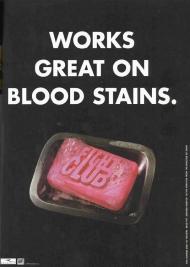 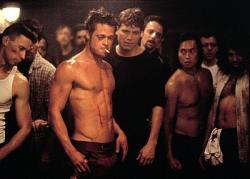 Ed Norton plays a man who at first appears to have the American dream. He has a nice paying job and a good apartment. However, he is unhappy and disillusioned with life. He meets a stranger, Pitt, who shows him a new way of life through fighting. They start an underground fight club and soon attract many members.

The movie ends with a awesome plot twist that makes you want to watch the movie over again. It also makes the entire movie less effective. I won't give away the twist but it made me lose any compassion for anyone in the film.

Norton and Pitt are great here. I have always been a fan of Norton's. He is awesome in everything he does. Pitt on the other hand has never impressed me as an actor until I saw this movie. He is perfect for this role.

Fight Club is worth a view or two. It is not as intelligent as it thinks it is but it sure will have you talking after.