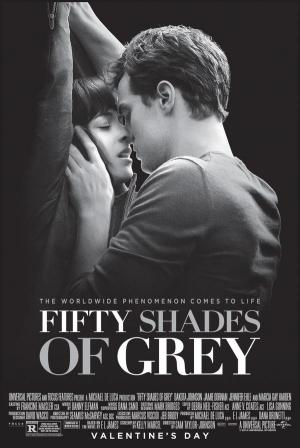 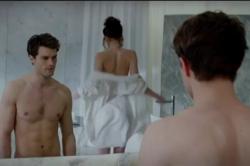 Anastasia is one of those beautiful girls that do not know she is beautiful, just like that One Direction song. A handsome college guy is in love with her. The guy who works at the hardware store with her, who looks as if he should be a model, also likes her. She is, of course, oblivious to their interests.

She is sent to interview Christian, a 27 year old Billionaire and an alumnus giving a speech at her college graduation. They instantly become attracted to each other. He is surrounded by beautiful women at work so he must see something in this plain girl that stands out, right? She is meanwhile looking at yet another good looking guy, only this one has enough money to buy her the world.

Here comes the rub. She wants a traditional boyfriend to take home to mom and go to movies with and make sweet romantic love to when in the mood. He, on the other hand, wants a submissive whore. After their first “fuck,” that looks an awful lot like making love, Christian shows her his “play room” filled with bondage toys. He then draws up a contract with very detailed specifics about sex acts and pain thresholds. He wants her to sign it and be his weekend submissive sex partner who will obey his every command even if it has nothing directly to do with sex.

She is unsure this is for her so she waits to sign it. He starts to romance her with dates and excursions that seem to be just what she is after. For her part, she begins to explore bondage with him in his play room. The plot simply becomes who can get the other to change to suit their sexual and romantic needs first.

From a guy’s perspective, this is all bull shit. If Christian wants a sub to torture and tease, all he has to do is pay for one. With his money and the ever availability of women willing to sell themselves, he would have no problem finding one, or a thousand, to let him do whatever he wants to them for a price. The fact that he so pursues Anastasia contradicts everything he claims to not be.

Let me not forget though that this was written by a woman and it is a female’s fantasy. Like in the Twilight films, the male leads explain their desires, be it blood, violent tendencies or sadistic sex and the girl responds with love, which it turns out is all the guy really needs anyway. He just does not know it yet.

As ridiculous as this film is, it was not as bad as I expected. Perhaps it was the interest of not knowing how far the bondage scenes would go, or discovering why Grey is into pain but it kept me watching. Do not get me wrong though. Fifty Shades of Grey is not a great film. For a better dom/sub film, check out Secretary (2002) in which a woman proves her love to a sexual dominant. I wonder if E. L. James was influenced by it as the dominant male in Secretary is named Mr. Grey.

Also like Twilight, Fifty Shades of Grey is so popular with its fans that no mere critic will have any effect on its success. The one criticism I have heard from females is that it has more female nudity than male. In an interview, Jamie Dornan stated it was agreed before filming began that he would not show his “todger” as that would be ugly and offensive. Considering why women love the books and are flocking to see the movie, Dornan does not define ugly and offensive in the same way as these horny female fans, or my brother Patrick. 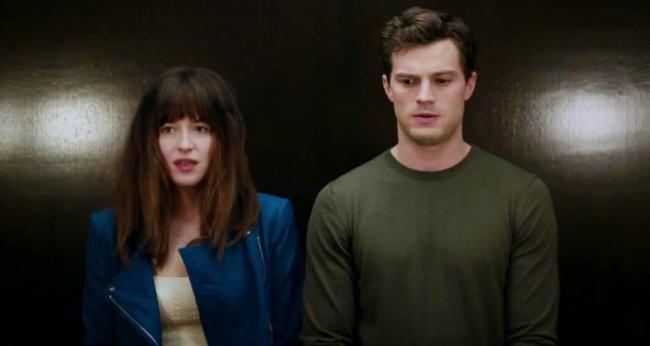 Dakota Johnson and Jamie Dornan in Fifty Shades of Grey.

This movie is contradictory. It purports to be a female sex fantasy yet all of the sex scenes are clearly aimed to please the eye of heterosexual men. I guess the producers figured that was the only way to keep the attention of every straight man who was dragged to this movie by their girlfriend or wife. The lack of male nudity -apart from seeming completely hypocritical- guarantees that this movie will never be a favorite among gay men. In fact from my perspective Fifty Shades of Dull would make a better title.

Unlike Eric, I get why Christian is attracted to Anastasia. When you can afford to buy anything your heart desires it loses its value. It's precisely the fact that Anastasia isn't for sale that makes her so enticing a prize. At one point he tells her that 15 different women have already stayed at his house serving as his submissive sex slaves. Although he doesn't come right out and say it, I assume those other women were being paid for their services. They were all probably gold diggers at any rate, and certainly none of them, besides Anastasia, were virgins. Anastasia Steele may be a bit on the plain side but she's still very attractive and, compared to his previous concubines, unique. Conquering her with the sheer force of his personality and seductive charm is a challenge. Paying some anonymous woman to perform sex acts is not.

But I do agree wholeheartedly that this is first and foremost a woman's fantasy. Christian is the perfect man. He's physically gorgeous and he's a billionaire for starters. Not bad. He also provides hot sex. And the final piece of the perfect man puzzle is the fact that he has a flaw for the woman to fix. In this case it's his need for S&M and his seeming inability to achieve emotional intimacy. Although, as my brother noted, apart from the actual spanking and tying up scenes, and despite his claims to the contrary, Christian is actually quite romantically inclined.

The acting is very one note and most of the sex is bland. At times it seems like Dakota Johnson is having trouble keeping a straight face. But with this dialogue that's understandable. At one point she asks why he's the way he is and Christian eloquently answers, “Because I'm fifty shades of fucked up, Anastasia.” Shakespeare couldn't have said it better.

Fifty Shades of Grey nearly bored me to tears. 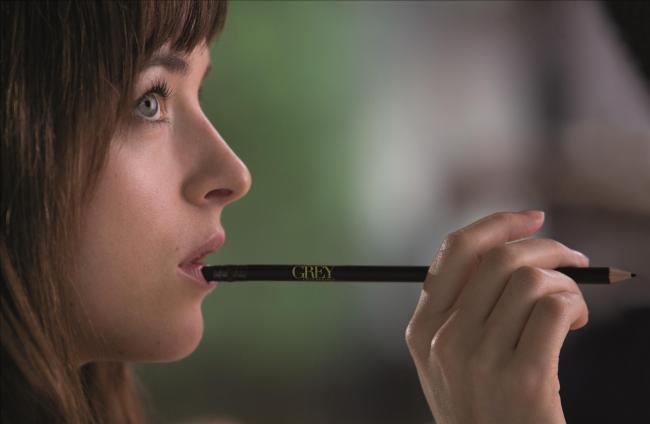 Eric's comparisons to the Twilight series are apt as, is now famously known, the novel this film is based on, started life as Twilight fan-fiction. Author E.L. James was such a fan of the books and the films, that she originally wanted Robert Pattinson and Kristen Stewart to star in this film. Apparently however, both Pattinson and Stewart felt that starring in one really horrendous movie series was enough for one career. And so after many other names were bounced around the parts finally fell to Don Johnson and Melanie Griffith's daughter Dakota and Irish actor Jamie Dornan.

While Dakota Johnson plays the spunky Anastasia with a likable spark, Dornan simply looks bored throughout. It isn't just his clothes and decor that are grey. His personality is as bland as his colorless apartment. His expression is the same whether he's talking to his parents over dinner or smacking Johnson's naked ass. Despite the horrible critical reaction, Johnson's career will still be boosted by this film and her willingness to appear nude won't hurt the number of job offers she receives. Dornan, on the other hand, does himself few favors.

Eric described their situation as, "She wants a traditional boyfriend to take home to mom and go to movies with and make sweet romantic love to when in the mood. He, on the other hand, wants a submissive whore." And that is purportedly what it's about, but in truth Christian is the weakest dominant ever. Anastasia is in charge from the minute they first meet. Eric also quoted the "No, I don't make love. I fuck...hard" line, but the movie is filled with scenes of love making. Even the supposed bondage scenes are all played in gentle slow motion and sure look an awful lot like making love rather than "fucking...hard". Only at the end, when Christian spanks Anastasia with a belt does it actually look as though he's doing something he wants, but she doesn't and the result is that she breaks off the relationship. You'll also notice that while Christian performs oral sex on Anastasia several times, not once is she shown doing the same to him. If that isn't the biggest sign that this is a female fantasy, I don't know what is.

I agree with Patrick that the sex scenes are mis-filmed. The original novels were reportedly filled with much more graphic sex scenes than were allowed in the film and they were aimed almost exclusively at women. But as Patrick noted, the sex scenes here show plenty of female nudity, but much, much less male nudity. And this despite the fact that the film was written by, directed by, and edited entirely by women. This is probably because, as Patrick surmised, the studio wanted to please the men in the audience, not to mention the fear that showing a penis would land the film with an NC-17 rating. With the nature of this story, it seems to me that an NC-17 rating is exactly what they should have been shooting for. 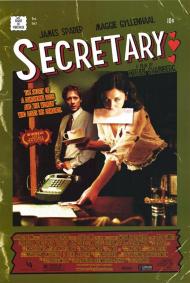