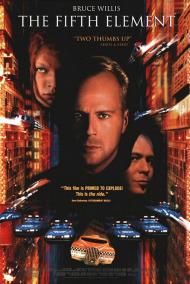 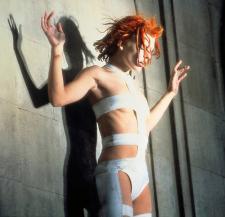 The Fifth Element is a very entertaining B-movie. It mixes humor, Sci-Fi and action together to form an enjoyable and fast-paced romp.

Bruce Willis stars as Korben Dallas, a cab driver 200 years in the future. When the ultimate being in the universe, Leeloo (Jovovich), falls into his cab he suddenly finds himself being dragged off to save the universe from a planet made of pure evil that is hurtling towards the Earth. To defeat this evil and its human minion played by Gary Oldman, he and Leeloo must gather together four stones representing each of the four elements and Leeloo herself (the fifth element), and perform a ritual inside a pyramid in Egypt.

Not many Science Fiction movies manage to pull off comedy, but this one does. Chris Tucker plays the imaginatively dressed DJ Ruby Rhod for some laughs, but nearly every scene, even the action ones have something funny going on, and without ever losing any of the tension. When Korben is fighting the aliens aboard the flying hotel, there are plenty of jokes and yet real action at the same time.

The look of the movie is kind of like the anti-Bladerunner. There are flying cars and the city is overcrowded and multi-cultural like Bladerunner, but where everything in that movie is dark and moody, everything here is light and colorful. The costumes by Jean-Paul Gaultier are particularly colorful and not a little bit campy. Leeloo's bandage costume is perhaps the movie's most iconic image.

If you want to find something to complain about you could wonder just what this planet of evil is that is never explained in the movie. Or you could ask why the stones and the fifth element were moved so far from the Earth where they will be needed every 5,000 years. You could even ask, just what is Luke Perry doing in that tiny part at the beginning of the film, but if you spent too much time asking those kinds of questions you wouldn't be enjoying this movie.

The cast is all quite good. Bruce Willis plays the hero with his usual cocky charm. Milla, who let's face it, isn't the best actress in the world, does a really good job as Leeloo. Is this helped by the fact that she hardly speaks a word of English throughout the movie? You decide. And Gary Oldman gets to overact to perfection as the sinister Zorg.

Too many movies in Hollywood, especially lately it seems, take themselves far too seriously. The Fifth Element is the perfect example of a movie whose only purpose is to entertain the viewer. It's pure eye-candy and a rollicking good-time. 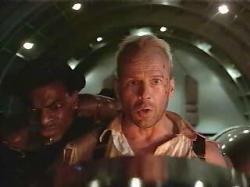 Chris Tucker and Bruce Willis in The Fifth Element

I am not sure why you call this a "B" movie Scott?  The budget of $90,000,000 and the famous cast clearly mark this a big film.  A few of the special effects have not stood the test of time, but they are small issues that do not deem this film a "B" movie what-so-ever.

You are right about the balance of humor and action.  Besson directs this film with fun in mind.  Bruce Willis plays it all straight and he keeps the jokes from taking over.  He never over reacts when his horrible mother calls and yells at him,  "You miserable bastard! I never should've pushed you out.'  Tucker provides many laughs as the obnoxious DJ, "Quiver ladies, quiver!"   He and Oldman play their parts big. "Torture who you have to, the President, I don't care. Just bring me the stones. You have one hour."

Besson even goes so far as to keep a blooper in the final edit.  When the Priest Vito Cornelius barges into Dallas's tiny apartment, he says, "I'm really sorry to have to resort to these methods, Mr. Willis..."  Without batting an eye, Willis keeps the scene going by correcting him, "Dallas."   The Priest then continues the scene, "Er, Mr. Dallas. But we heard about your good luck on the radio."

Although there are action scenes and blood, The Fifth Element is first and foremost a comedy.  Sure it does not all make sense, but who cares when you are having this much fun.  Sit back and enjoy it.  As DJ Ruby Rhod says, "What's wrong with you? What you screamin' for? Every 5 minutes there's somethin', a bomb or somethin'. I'm leavin'." 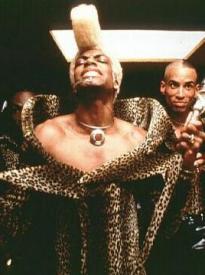 Chris Tucker in The Fifth Element.

I agree with you Scott that this is definitely a B-movie regardless of the size of its budget or level of fame of the cast. Apparently Luc Besson wrote the first draft of the original screenplay while he was still in high school.  The result is an intentionally campy science fiction action adventure with the emphasis squarely on the laughs. The Fifth Element entertains from start to finish.

Bruce Willis exhibits his usual cocky charm, his mouth in that perpetual smirk of his. Milla Jovovich does a decent job as Leeloo Minai Lekarariba-Laminai-Tchai Ekbat De Sebat, AKA the ultimate being in the universe. The script even manages to throw in some basic philosophical commentary. When Leeloo says to Korben Dallas, “Everything you create, you use to destroy.” He replies, “Yeah, we call it human nature.”

Chris Tucker is a real scene stealer as the flamboyant DJ Ruby Rhod, one tiny step away from drag (see photo). He minces, struts, prances and stomps his way around, seducing every female he encounters while barking out hilarious lines in that signature loud voice of his.

As in his previous movie Leon: The Professional, Besson uses Gary Oldman as an over-the-top villain. Whereas in that movie he was meant to be taken as a seriously sinister bad guy, here he is definitely being played for laughs as his ridiculous hair style and silly accent attest.

The character of the Diva, with her blue skin and strange tentacles, seems to come straight out of the Star Wars' universe. The song she sings features parts of the opera “Lucia Di Lammermoor” and her voice was dubbed by soprano Inva Mula. To achieve the desired vocal effect she sang individual notes that were then recorded and spliced together as the changes in octave were too abrupt for anyone to actually sing in order.

The movie ends on a clever note, with yet another complaint-filled phone call from Dallas' mother. She goes into a rant to her son, “ I might as well throw myself into traffic, Saran Wrap myself to the bed and pretend my child is suffocating me...” All of these are things that actually happened in the movie. I'm on the same page as my brothers on this one. The Fifth Element is a creative, colorful and campy good time at the movies.