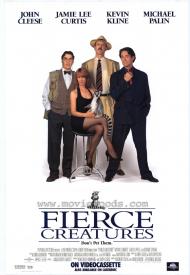 Fierce Creatures is the spiritual sequel to 1988's A Fish Called Wanda. It features the same cast of actors but all of them play different characters in a different situation. While it's not the equal to Wanda and didn't do nearly as well at the box-office, it still contains some very funny moments and is an enjoyable, if not classic, farcical comedy.

Cleese plays Rollo Lee, an uptight character of the type he has played almost his entire career, although slightly more likable this time than is usual for him. He's just taken over running the Marwood Zoo in England. His idea to make money with the zoo is to allow only fierce animals to be exhibited there since what he sees people wanting is violence. As he puts it, "Mr. Sylvester Stallone didn't get where he is today by playing in Jane Austen."

Curtis and Kline play Willa and Vince, American executives from the Octopus Corporation, which owns the Zoo and have come to take over the job from Lee. Kline also plays Vince's father, Rod, a sort of Rupert Murdoch figure who runs his empire with an iron hand. Vince is in lust with Willa, but Willa is falling for Rollo, partly because of her belief that he is a great lover due to a series of misunderstandings.

Fellow Python Michael Palin plays Bugsy, one of the zookeepers. In contrast to his part in Wanda, here he never shuts up; droning on and on about everything and anything, providing some of the funniest moments in the movie.

There are several great lines in the movie such as, "He looks like he borrowed his body for the weekend, but hasn't figured out how it works yet." and "You screwed up my whole childhood!" "How could I have? I wasn't even there!" Some of them might not sound funny out of context, but always make me laugh during the movie like, "Mother always said, when you're naughty, you go to the shed." and "That's where I keep my Kleenex."

Parts of the movie do seem a bit disjointed. There are scenes that don't seem to be well edited together. Immediately after the Vampire Gunmen Run Amok scene, for example, the scene cuts to Rollo up in his room and it seems like a rough jump. Is this supposed to be immediately after the previous scene or has time passed? There are a couple of other moments with a similar feel.

A few other scenes seem a little contrived. When Rollo, Bugsy and Cub are hiding in the closet, for example, and they begin taking their clothes off to avoid the tarantula, it just doesn't ring true.

The comedy though, far outweighs any problems the movie has and at just 90 minutes the movie flies by. There are also special treats for longtime fans of Cleese. Not only are there several references to A Fish Called Wanda, but also several references to his earlier work in general, in both lines ("Beautiful plumage!") and various actors in small parts.

This movie will always live in Wanda's shadow, which isn't fair. It has plenty to recommend it based on its own merits. Avoid comparing the two and you'll enjoy this one just fine. 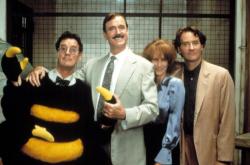 Fierce Creatures was a movie I first saw about 10 years ago. I remember not being particularly impressed with it at the time. Watching it again, however, I found it to be fairly funny, although, as Scott pointed out, it will forever sit in the shadow of the comically brilliant A Fish Called Wanda.

Scott mentioned the two funniest lines in the movie. The Sylvester Stallone/Jane Austen remark and the newspaper headline “Vampire Gunman Runs Amok”. This is the punchline to the movie's funniest sequence where all the zookeepers are desperate to keep their jobs so they fake injuries to make the harmless animals in their care seem especially fierce and dangerous. Of course there is a woman who falls and really gets hurt but John Cleese assumes it's just another feigned wound. He ends up literally licking the blood off her leg in an attempt to prove it's fake. Awkward!

As my brother said, Cleese is playing his standard character only he's a bit more likable than usual. Much of the humor derives from him getting repeatedly caught in what look like compromising sexual situations with numerous women and animals, but which are all actually innocent. He gets tongue-tied whenever he's around Jamie Lee Curtis. She plays it straight for the most part, allowing the men to outshine her in the comedy department. Her famous breasts seem to be the focus of most of her scenes.

Kevin Kline makes the most of his dual father/son roles especially at the movie's climax where the son imitates his father. I agree Michael Palin steals many scenes with his incessantly chattering pedant. When Cleese mentions that the Zoo owner wants his financial empire to grow in an unlimited capacity Palin tells him, “Presumably he's aware of Dr. E.F. Schumacher's concept of limited resources, or as Jean-Paul Sartre puts it...” Before being mercifully interrupted.

Fierce Creatures is an amusing little reunion for the stars of A Fish Called Wanda. It pays tribute in many small ways to that previous movie. In the final scene, for example, John Cleese calls Jamie Lee Curtis's character Wanda by mistake. Unfortunately all the references to that movie just highlight the fact that this one isn't anywhere near as hilarious. 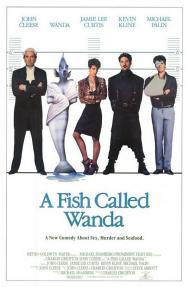