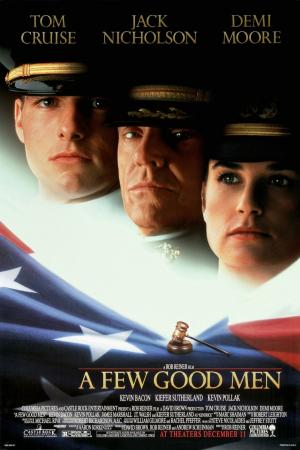 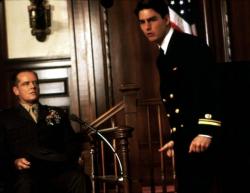 Jack Nicholson and Tom Cruise in A Few Good Men.

Early in Tom Cruise's career, his characters often had "daddy issues." From the pressure imposed on him from his fathers in Risky Business (1983) and All the Right Moves (1983) to trying to live up to his father's expectations in Top Gun (1986), Cruise seemed to play lots of variations of the same person. With A Few Good Men, the theme does not play a central role in the plot, but it is an important theme.

Cruise plays JAG officer (Naval Lawyer) Lt. Daniel Kaffee who would rather play softball than take his military career seriously. This angers Lt. Cdr. JoAnne Galloway, whose job is to see that Kaffee does his job. They do not get along for much of the film. At one point she yells at him, "You know nothing about the law. You're a used-car salesman, Daniel. You're an ambulance chaser with a rank. You're nothing. Live with that."

With that hostility in mind, the two work together, along with a third lawyer, to defend two U.S. marines accused of murdering a fellow soldier on the U.S. Naval base in Guantanamo Bay, Cuba. The marines claim it was an accidental death following orders to beat a soldier who was not up to standard. The prosecution claims the soldiers acted on their own volition.

Although the interaction between Kaffee and Galloway is often tense, the film reaches a new level of intrigue when the lawyers travel to Guantanamo Bay to interview servicemen and the base commander, Col. Nathan R. Jessup, played to the hilt by Jack Nicholson. Upon their initial meeting, it becomes clear that Jessup has no affection for the snooping Lawyers. The film reaches its classic climax when Jessup is called to testify in Washington D.C.. The scene of Cruise questioning Nicholson on the stand is a truly great moment on film, even if Jessup seems to give away his hand a bit too easily. Who can forget Nicholson's, "You can't handle the truth!" speech.

Here is where the daddy issue comes into play. Shortly before the trial, Galloway brings up Kaffee's father, who responds, "Oh, spare me the psycho babble father bullshit." Whether he wants to admit it or not, putting Jessup on the stand is his therapy in dealing with his father's legacy.

Lead by Cruise, Nicholson and Moore, who was at the height of her career, A Few Good Men is packed with a great cast reciting some very memorable lines written by Aaron Sorkin, who wrote the screenplay as well as the stage play. The one weak link in the cast is Wolfgang Bodison as Dawson, one of the accused marines. He worked in Rob Reiner's office, who thought he looked the part and cast him. Too bad he could not act the part. In a film with great dialogue, he ruins what few lines he has.

As a last personal note, I have to write that I was stationed in Guantanamo Bay when I was in the service, and it was fascinating seeing it on screen again. The base houses thousands of servicemen and women, as well as their families and civilian workers, but for the past decade or so, it has only been known as a prison for the Taliban. Watch A few Good Men and see that it is more than that and that we do have U.S. servicemen in harm's way even when we are not at war. Or can't you handle the truth?

Not only did Tom Cruise play many characters with “daddy issues” early on in his career, for a while there he also appeared opposite several legendary actors of his father's generation. In 1986 he starred with Paul Newman in The Color of Money (for which Newman finally snagged a Best Actor Oscar after numerous nominations), two years later he starred opposite Dustin Hoffman in Rain Man (for which Hoffman received his second Best Actor Oscar), and of course in this movie he shared the screen with Jack Nicholson (who was nominated for Best Supporting Actor). (It is worth noting that Cuba Gooding Jr. has one brief scene here and four years later would star opposite Cruise in Jerry Maguire and win a Best Supporting Actor Oscar.) Tom Cruise, meanwhile, remains Oscar-less after three nominations.

A Few Good Men (and one woman) is a solidly entertaining courtroom drama. Cruise and company keep your attention riveted to the screen even if the script does play a bit fast and loose with actual court-martial proceedings. The real point of the movie is to give Cruise and Nicholson two juicy roles all building to that famous showdown in court.

Cruise plays his usual hotshot character, who is always great at what he does. This time around he has a rather lackadaisical attitude towards his chosen career but then this is needed to give his character some emotional arc. Demi Moore plays the weakest written character. She is there to goad Cruise on but she has to be one of the most dimwitted people ever to pass the bar. Her “strenuous” objection in court being the best example of this, although it does provide a bit of levity to the courtroom scenes.

The entire cast does good work even if they all seem to be playing to the highest row in the balcony. From Kiefer Sutherland's Lt. Kendrick (with an overdone southern accent, “No, I like all you Navy boys. Every time we've gotta go someplace to fight, you fellas always give us a ride.” to Kevin Bacon's Capt. Ross (with smug determination), “Lieutenant Kendrick, did you order Lance Corporal Dawson and Private Downey to give Willie Santiago a code red?” there's enough ham in the cast to feed every soldier at Guantanamo Bay.

All the theatrical histrionics work in the stories' favor. It's set on a high flame that reaches the boiling point with Nicholson's now iconic outburst in court. Sure the good guys and bad guys are all drawn with equally broad strokes but none of that hurts the movie's enjoyment level. A Few Good Men is one of those movies where you just sit back and relish the performances while anticipating Jessup's inevitable comeuppance. All these years later (as of this writing Cruise is just two years younger than Nicholson was then) it remains a riveting courtroom drama. 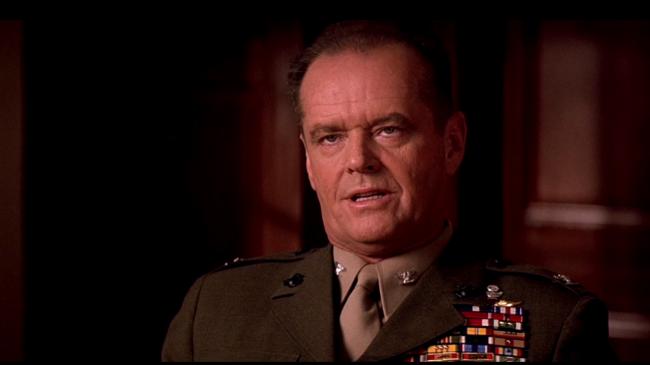 A Few Good Men (and one woman) is solidly entertaining thanks mostly to its talented cast and the brisk pace that belies its 138 minute running time. With all the acting fireworks it's easy to overlook the predictability of the plot and the manner in which it is spoon fed to you. There's nothing subtle here. This is old fashioned scenery chewing at its finest.

Patrick commented on Tom Cruise's lack of an Oscar and I think it's due to his acting style, which is so easygoing and charming that he rarely seems to be acting. His character here is a typical one of his. He's cocky and arrogant, but he gets away with it with charm and that embrace the world smile of his that invites you to enjoy the joke with him. He makes it look so easy, you forget he's working.  It's a trait that he shared with his former acting mentor Paul Newman, who also went Oscar-less for most of his career. Like Newman, I envision Cruise winning a late career Oscar, probably in a supporting part.

The real fun in the film is watching the trio of Cruise, Moore, and Pollak plot and strategize their way through the case. Moore and Cruise share a playful chemistry. I disagree with Patrick that she's the weakest written and also that she's dimwitted. By the time she makes that outburst in court, it's already been established that she's good at the job of investigating, but horrible in the courtroom. It's why she's passed over in favor of Cruise in the film's very first scene. There are more nuances to her character than Pollak's or Sutherland's. I'm only surprised that someone didn't try to turn these characters into a television series. They would have needed different actors of course, but there's definitely the potential to keep them working together on further cases.

Sorkin writes great dialogue, but the overall structure of the story is a little weak. Too much is spelled out to the audience and the characters are too black and white. If Nicholson had taken the stand wearing a black cowboy hat on his head it couldn't have been more obvious. Also, every stage and strategy of the trial is laid out clearly so we are rarely surprised. And the ending, while dramatic and well acted, feels like an old episode of Perry Mason. All Col. Jessup needed to do was keep his cool and the trial would have been lost. For someone who has risen so far in the military, he behaves shockingly stupidly; more like a petulant child than a commanding officer. Of course if he didn't lose his temper in that scene the world would be deprived of one hell of a performance by Jack Nicholson and his now legendary, "You can't handle the truth!"

Although that one confrontation scene between Nicholson and Cruise is the most famous moment in the film, it only succeeds because of all that came before it. The entire film builds to that one moment. It's highly theatrical, but also highly entertaining.