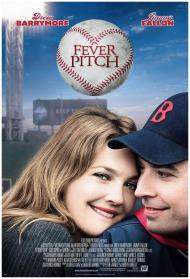 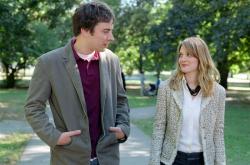 The two key elements to a romantic comedy are (not surprisingly) romance and comedy. Fever Pitch does an excellent job with both. Its stars, Jimmy Fallon and Drew Barrymore, have a great chemistry together and their love triangle, with the Boston Red Sox being the third point, is cause for some cute and funny humor.

Barrymore stars as Lindsey Meeks, a twenty-ten single woman, who is obsessed with her job and an upcoming promotion. She meets Ben (Fallon), a teacher, when he brings a group of students on a field trip to tour her office. After a bit of friendly flirting, Ben asks Lindsey out on a date and they're soon into a relationship.

Ah, but this is the middle of winter. What Lindsey doesn't know is that Ben is obsessed with the Red Sox. She knows he's a fan, but doesn't appreciate the magnitude of it until Ben takes his annual trip to Florida to be with the Sox during Spring training and she catches him on ESPN stating that in the order of things, the Sox come first, then sex, and then breathing.

When Ben was a child, following the loss of his father, his Uncle Carl took him to his first Red Sox game and it was love at first sight. Years later, when his Uncle died, he left his season tickets, which are behind the Sox dugout, to Ben and he never misses a game. His obsession doesn't stop there however. His apartment is a virtual Red Sox shrine, with posters, sheets, jersey's and even the telephone bearing the mark of the Sox.

While I've never been sports obsessed, I have of course known many guys who are like this. They have trouble remembering their anniversary but they can tell you the lineup of their favorite team without a thought. Not all sports fans have the great seats that Ben owns, but his obsession isn't overly exagarated.

Lindsey goes through the various stages of a relationship in the way that you'd expect. At first, she thinks his obsession is cute and understandable. Then she tries to join in by going to games and reading up on the history of the Sox. Eventually though, she begins to resent it. As she puts it, whenever she wants to make plans with him, first she has to run to the refrigerator to check the baseball schedule to see if he'll be free that night.

Since the story takes place over the course of the 2004 baseball season, any baseball fan or anyone living in New York can tell you how the season ended. After 86 years of trying, the Sox won the World Series. So reliable were their losses that the original screenplay to this movie had to be rewritten when the unthinkable happened and the Sox won.

Cute and funny, Fever Pitch is a romantic comedy that should resonate with a lot of couples. 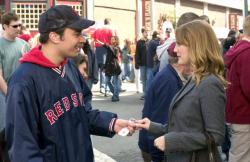 OK, I admit it. Before requesting a vacation from work, I check the Detroit Tiger's baseball schedule. If I am going to be off I might as well maximize my baseball watching time. I am not prepared to offer my wife in trade for some baseball tickets, as a guy in Fever Pitch does, but I am a fan none the less.

Fever Pitch works so well for me because it really shows how having passion for a sports team or for your work can get in the way of a relationship. Most love stories are about people who always seem to have all kinds of time for each other. Fever Pitch demonstrates that we often have to schedule romance just as we do a business meeting or sports event.

The real theme of Fever Pitch is learning to except the idiosyncracies in the person you find yourself in love with. When Barrymore visits her folks, we see her mother laughing off her father's dyed hair. No relationship is perfect but, if you love someone enough, you can learn to overlook those things about your partner that bother you. A relationship is about give and take, or as Barrymore tells Fallon, "If you love me enough to sell your tickets, I love you enough not to let you."

Fever Pitch is the best couples movie I have seen in a very long time!