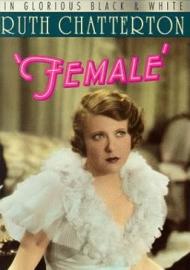 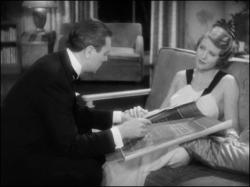 Scott wrote in his Three on a Match review that, "Before the (Hayes) code they (women) were allowed to be good, bad or both good and bad." In Female, Ruth Chatterton plays Alison Drake, the head of a automotive manufacturer.  She proudly tells another woman that she treats men like men have always treated women.  She is speaking sexually.

The most unique aspect of Female, is that the lead loves sex.  Alison regularly beds her male executives.  She does not do it to break them up from a girlfriend or wife.  She is not after their money.  This girl just likes to screw.  This makes Alison a rare movie character even by todays standards.  She treats her work force like a stable of studs.  Taking a different one out for a ride whenever the mood strikes her.

In an early scene she invites a suit to her home for dinner.  He thinks it is to discuss his idea, while she just wants to get him in bed.  At one point he is talking about enthusiasm and she asks suggestively, "Are you naturally enthusiastic?" as she throws a pillow on a bed.  When he does not take the hint she has the butler bring in some vodka.  The next day he is shown at work smiling and yawning, as another worker asks if he had a good night.  She gives him a bonus.  The men working in payroll comment, "Another one huh." while the other says,  "Our bonus army is growing and growing."

This causes her some friction at work, such as when her male secretary confesses that he loves her.  Her seduction rate is not 100% successful.  A young dashing looking designer that she invites home does not respond to her seduction or vodka.

After getting bored at her own party, in which she dances with one married man and then gets proposed to by another, she goes to the wrong side of town for some fun.  She meets a man, Jim, and keeps up with him in a shooting contest. She offers to go home with him but he says he doesn't "...take pick ups home."  As he walks away, a woman off to the side makes the snarky comment, "Their must be something wrong with your technique deary."

Female is only an hour long and was written by a man and a woman.  It was way ahead of the times.  Here was a woman who ran her own successful big business.  She sought out pre-marital sex when she wanted it and on her terms.  Even by todays standards she is considered controversial as she commits serious sexual harassment, rewarding the employees that sexually satisfy her.  The one dated content is that every man who has sex with Alison falls in love with her, making them all victims of interpreting sex for love.  Female discusses the politics of office sex more blatantly than any film that I have seen made during the first half of the century. 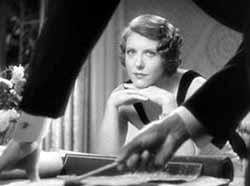 Eric the scene where it shows the male employee yawning at his desk after a night of presumably vigorous sex with his boss takes place right after it shows Alison the morning after. She is clearly in a great mood as she enthusiastically starts exercising, causing her female friend to jealously ask, “Where do you get all that energy?” And although you didn’t mention it Eric, the woman (and her friend) that makes the snarky comment to Alison is obviously a prostitute, which makes the insult worse.

I agree that Alison is a very interesting character. Her succinct views on marriage are as follows, “I know for some women, men are a household necessity; myself, I'd rather have a canary.” The romance with Jim Thorne mirrors her real life at the time; she was married to her leading man George Brent. The movie is clearly playing around with sex roles. Alison acts like a man and all the men working for her react by falling in love much the way women are normally expected to do. I don’t think their behavior is dated so much as intentionally making a point. It must have shocked audiences of the day seeing a woman with this much power and sexual aggression.

Michael Curtiz was adept at nearly any genre of film. He knew how to tell a story and keep things moving along. Hollywood could sure use a director like him today, where so many filmmakers don’t seem to know when to yell cut, or leave a scene on the cutting room floor.

The sets are quite glamorous and the B & W cinematography exquisite. The scene at the pool party is especially impressive. This was the same pool that was used in the James Cagney musical Footlight Parade. Speaking of Cagney, in one scene Alison hires a detective to follow Jim Thorne. He tells her Jim stopped to see a performance of James Cagney in Picture Snatcher. Another pop culture reference is made by Charley Grapewin as the drunk at the hamburger stand. When Jim gives him some change and then he and Alison walk away the drunkard calls after them, “Why don’t you come up and see me sometime.” An obvious parody of Mae West’s signature line.

This movie had me in its thrall right up till the end. Unfortunately it has a cop-out ending. I was fine with Alison getting married to Jim. But that isn’t enough. They have her turning over control of her company to her husband and deciding – completely out of the blue – that she wants to have nine children. This makes no sense coming from a woman who up until this scene has shown absolutely no interest in being at all domestic or wanting a husband.

The gender bending aspect of the movie is fascinating and definitely pre-Code. The ending, however, is a let down. It’s as if they were saying, “Just kidding, we know women aren’t really like this. They all really just want a man and a family.” Too bad, because it nearly ruins what could have been a classic film. 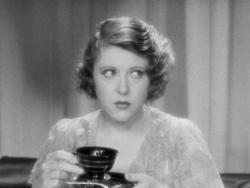 80s year later and Alison Drake is still a rare type of female character. Samantha from Sex and the City and Alexis Carrington of Dynasty are two of the only ones I can think of that come close to matching her. Maybe that's because while men aren't condemned for acting like her, when a woman does it, people like you Eric will refer to her as a slut.

I agree with you Patrick that the ending is a complete and total cop-out. It's not just a betrayal of her entire character, but it also isn't believable in the slightest. It should have ended one of two ways. The last scene should either have been Alison cutting Jim a check just like all the others, or, if it wanted to be slightly more romantic then it could have had both Alison and Jim bend a little. He'd have to accept that she's the boss at work and she'd have to give in at home more.

It's not just Alison who behaves out of character. At the beginning of the movie her assistant Pettigrew is proud of her and brags that she will never find a man good enough for her and refers to her as a superwoman. Then at the end he completely reverses himself and tells her that he knew one day she would change because she is just a woman. It really feels as though the ending from an entirely different movie has been jammed onto this one.

The relationship between Alison and Jim is also never very believable. Like you Eric, I assumed that Alison was more intrigued by his hard-to-get attitude than actually in love with him. He's the first man to say no to her so naturally she's going to take that as a challenge, but once he gives in she would be just as bored with him as she was with every other man.

If I hadn't been enjoying the first portion of the story so much I wouldn't have been so upset by the ending. It makes it difficult to award stars. The first half is 3 or 3 and a half easily, but the ending isn't worth half of one.