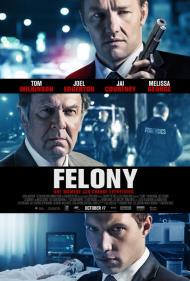 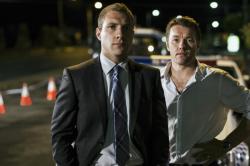 After recently watching some less than great Hollywood films I did what I always do, I watched a movie made elsewhere. I found the testosterone filled Felony from Australia. It is a low key police drama with some realistic characters in tense situations and solid performances by its three leads.

After celebrating a major bust with other police officers at a bar, Detective Malcolm Toohey attempts to drive home while intoxicated but ends up seriously injuring a child. Two detectives working a case nearby arrive at the scene. The veteran cop, Carl, knows Malcolm and quickly gives his junior partner, Jim, a mundane task so as to be left alone with Malcolm. Jim suspects right away that Malcolm is not telling the truth and begins investigating what happened even though Carl tries to persuade him otherwise.

Malcolm is a family man. He has a sweet wife and two adorable young sons. Malcolm is not a bad guy but he is also not without moral issues. He assaults criminals he has arrested and assumes he is in some ways above the law. Police, I imagine, are in many ways like soldiers. They are a band of brothers who look out for each other. Felony demonstrates just how this solidarity works and what problems and consequences it may bring.

Felony is a brilliant example of the many shades of moral grey. The police look out for each other, turning a blind eye to the others' indiscretions. To them they are proving their loyalty. To others they are showing their hypocrisy. What happens when one detective sticks his neck out to protect another who has broken the law? Is the protected cop now obligated to the other? What happens to the cop who rats the other one out? Is it appropriate for a detective to romantically pursue the mother of the victim of the crime he is investigating? How do you perceive the wife who tells her husband to lie to protect their livelihood?

Joel Edgerton is one of those actors that always comes across as a nice guy. He is perfectly cast as a man who has a lapse in judgment and must live with the results of it. We know what he should do but understand why he struggles so with that decision.

Tom Wilkinson has a greater acting range, making Carl a more complicated person. Carl is old school and plays by the policeman’s unwritten code of watching out for your fellow associate in uniform. In his heart he is doing the right thing in protecting a colleague. We know it is not the lawful thing to do but we understand why he did it.

Jai Courtney has an image of playing the tough guy and although you could describe Jim with that term, he is more self-righteous than hero. He is in search of the truth and for that we want him to succeed but he almost comes across like an arrogant prick. Besides closure to the victim, the revealing of what actually happened would accomplish nothing but the destruction of several detectives’ careers and heartache for their families. It is Jim who has the best story arc as we later see that he is not perfect and thus we must ponder if he is qualified to cast the first stone.

I found myself caught up in the lies and attempts at manipulation until the vague ending. It is the film’s weakest aspect. Up until the last few minutes, I was caught up in the tense lives of these three men. They must maneuver around each other as well as deal with their own demons. Felony is an engrossing moral play with an unfortunately flawed ending.