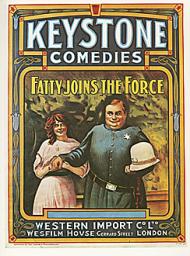 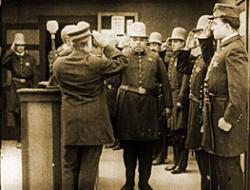 Although he appeared in a few earlier shorts, in 1913 Roscoe Arbuckle made some three dozen films.  It was the year that he started using the moniker "Fatty."   In 1913, Arbuckle was the first of the great silent comedy stars.  Charles Chaplin would make his debut the following year but not star in shorts until the year after that.  In 1913 Harold Lloyd was just an unknown extra and Arbuckle had four years before he would discover Buster Keaton.  Minus Mary Pickford, Fatty Arbuckle was arguably the biggest movie star in the world in 1913.

As a huge fan of Keaton's I often do not fully appreciate Arbuckle's work with him.  When I watch the films they starred in together, my focus is always on Keaton, in anticipation of his next stunt.   This sells Arbuckle short as he is truly a comic gold mine, as Fatty Joins the Force proves.

It starts with Fatty and his girlfriend strolling in a park.  As a nanny is distracted by a flirtatious cop, the little girl in her care falls into a pond.  Fatty's girlfriend pushes him into the pond to save the drowning child.  He haphazardly does and becomes a hero.  The girl's father just happens to be the Police commissioner and offers Fatty a job as a policeman.

To make his pushy girlfriend happy, he takes the job.  She proudly walks through the park with him in his new uniform.   He breaks up a fight and ends up chasing some kids who threw food at him and shoved a pie in his face.  The kids easily lose him, and he decides to strip down to his underwear and wash off in a pond.  As he swims the boys tear up his pants and dirty his jacket.

Upon finding his jacket near the pond, the police and his girlfriend think Fatty must have drown.  Meanwhile Fatty who now only has torn up pants to wear is running around the park like a lunatic.  He is being chased by some other police as well as some nervous citizens, thinking he is some "wild man."

Even though the jokes are as amateur as you can expect from a 100 year old film, (a pie in the face) it does have some interesting things to say.  Fatty clearly has no ambition here, but his girlfriend does.  She pushes him every step of the way.   Even though this is only a 13.5 minute short we understand their relationship.  He is clearly thrilled with her while she is eager to improve him so as to improve herself by association.  I will not give away the last laugh but it reemphasizes the old adage that you can never please a woman and only fools try. 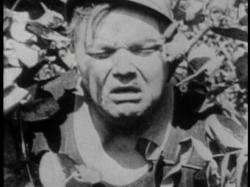 Fatty Arbuckle in a rare close-up in Fatty Joins the Force.

Charlie Chaplin famously said that all he needed to make a movie was "a pretty girl, a park bench and a policeman". The year before Chaplin invented his Little Tramp character, Arbuckle made this slightly more elaborate take on that concept. Here we have the pretty girl, most of the action takes place in a park (and yes there is a bench) and we have not one, but several, policemen, including Arbuckle himself.

The humor and acting are as amateurish as you would expect from a movie made in 1913. This was back when a pie in the face or slipping on a banana peel were still considered hilarious. Arbuckle demonstrates his rubber-faced mugging and he could take a pratfall with the best of them. The cartoonish sight of this obese man falling down is funny in the most basic sense. As fat as Arbuckle was he was also incredibly light on his feet.

Some of the laughs are unintentional. Watch how the little girl “falls” into the lake. It looks more like she jumps. And the overwrought mannerisms of Fatty’s girlfriend are worth a chuckle or two. Arbuckle briefly does a funny swimming stroke where his butt sticks up out of the water. He would repeat this gag in later movies.

Fatty Joins the Force is memorable for showcasing ingredients that would become standard fare in subsequent silent comedy shorts. Roscoe Arbuckle deserves to be remembered today as a seminal figure in film comedy. Isn’t it about time his legacy focused on his talents as a comic and not on his career ending scandal? 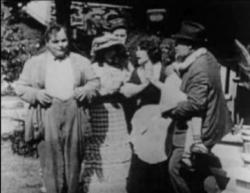 So this is where they got the idea for the Police Academy movies. I knew some of the jokes in those movies were old, but I had no idea just how old.

Arbuckle, as he would later prove, was a great silent film comic. You can see echoes of his performance in the likes of John Belushi and Chris Farley. What is it about a fat man that makes us laugh? I suppose it's partly because of the way Arbuckle  was able to throw himself around despite his size. As you say Patrick, he was light on his feet, if not in his seat.

The ending actually surprised me. I was expecting it to be a happier one. I guess it's just Arbuckle getting his comeuppance for being so reluctant to save the girl at the beginning of the short. Even with that for justification, it's still a bit of a downer.

I agree that this isn't Arbuckle's greatest work. He would do better in a few years when he and Keaton began working together. But even in this rough short his charisma shows through.

Patrick, you're right when you say it's time Arbuckle's legacy was revised. If they can remake the Police Academy movies--which they are doing-- then certainly a truly great comic talent is worth a second chance.