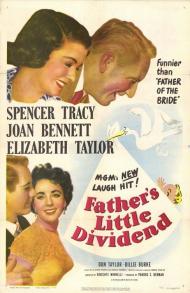 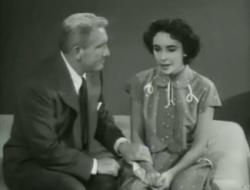 After the success of Father of the Bride MGM wasted no time churning out a sequel. Appropriately enough, Father's Little Dividend arrived in theaters nine months after the wedding. Director Vincente Minnelli and stars Spencer Tracy and Elizabeth Taylor returned for this second installment. This time around the young bride is in the family way, a situation that couldn't have been more topical in 1951, the peak year of the baby boom generation.

Like the first movie the story is narrated by and told from Stanley Banks' (Tracy) point of view. Just when he has recovered from his daughter's wedding he learns that she is pregnant. The humor is predictable. There are the typical arguments between the paternal and maternal grandparents over baby names and such, and several false alarms before the baby is actually born. The early fifties suburban neighborhood portrayed in Father's Little Dividend helped set the stage for all those family sitcoms that would become so popular later in the decade, and it has as little to do with the real world.

The cast, fortunately, was able to lift the material to a higher entertainment plane than it truthfully deserved. Spencer Tracy, the most natural actor ever to grace the screen, lives up to his reputation. He makes Stanley loveable despite his crotchety cluelessness. Elizabeth Taylor is perfect as the radiant young expectant mother. She is impossibly beautiful and shows a flair for comedy. Joan Bennett, Billie Burke and Russ Tamblyn all shine in supporting roles.

Far from a great movie, Father's Little Dividend is still worth watching thanks to a great cast performing at the top of their game. 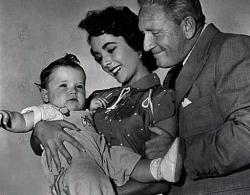 Parents often have a hard time imagining that their children, no matter what age, have a clue about what they are doing. Of course their parents thought the same and their children will follow suit. Each generation has similar experiences. Within the human condition there is truly nothing new under the sun. However, it feels new to each generation, while the older ones just look on knowingly.

Stanley remarks that his daughter and son-in-law should have thought about a house before having a child. This starts the first crisis as Ellie wanted Kay and Buckley to move in with them while the Dunstan’s have plans to expand their home to accommodate the new family. Parents raise their children and then sometimes have a hard time letting their children make their own decisions. Both sets of parents insist Kay should see their Doctor.

That is the success of this film. We see ourselves in these people, even if it does have little to do with the real world. Stanley is a family man who sees his family changing right in front of him and is perturbed that no one took the time to ask him, as head of the household, for his permission to do so.  Of course no one has to, thus making the story arc of the film Stanley and the other parents coming to grips with the fact that Kay does not need their opinion when it comes to having and raising a child.

Here’s the rub. The parents volunteer to help with the remodeling of their house and by making major purchases for them. Thus, the question arises, how much say in their child’s life does financial assistance buy. The movie does not delve too much into that but it is the view of most parents. If a grown child accepts help from their parents, do they also have to accept their advice?

Kay demonstrates this dilemma by running to her parent’s home when she and Buckley get into a fight. Just earlier she yelled at both sets of parents that she and Buckley were making all of their own choices. She wants to have it both ways. She wants to be the independent woman when things are going well but when things get difficult she runs to her parent’s protection. “Buckley, what’s happening to us?” she cries when Buckley comes for her. He replies very tenderly, “Haven’t you heard? We’re having a baby.” Aaawww.

If this movie demonstrates anything, it is that our children never stop being our children, even when they are making children of their own. Stanley likewise demonstrates that growing up is a lifetime experience. It does not end when we finish school, get married or have children. Stanley had to learn to let his daughter go in Father of the Bride (1950) and now must learn to let her make her own decisions, whether they are about her marriage or her child.

The circle of life is so solid it almost seems boring, yet each generation makes it new as they experience it all for the first time. Just look at the remakes starring Steve Martin. 40 years later and the same story is just as relevant. 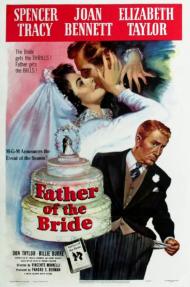