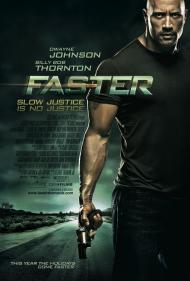 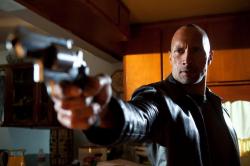 I'm not sure how anyone could take such a simple premise as this movie has and get it so wrong.  I mean, you have Dwayne "The Rock" Johnson, this generation's Arnold Schwarzenegger, on an R-Rated mission of vengeance.  It should have been an adrenalin fueled thrill ride, but instead is saddled with a two subplots, one melodramatic and the other just silly, that drag the movie down and make it at times quite laughable.

After 10 years in prison, Driver (Johnson) is released.  He immediately goes on a mission of revenge, and I do mean immediately.  It seems that before he went to prison, he, his brother and some cronies, robbed a bank.  Someone then robbed the robbers, killing all of them but Driver, who survived, but now has a metal plate in the back of his head from when they shot him.  He's now on a one man mission to kill all of the people who were involved in his brother's death.

That plot sounds kind of exciting, right?  I mean that's the movie I paid my $10 to see.  I wanted to see Johnson go all badass in some high octane fight scenes and car chases.  Shallow and violent maybe, but also entertaining, even if only in a cheesy way.  That's only a third of the story however.

Billy Bob Thornton plays a drug addicted cop who is part of the investigation team who is put on Driver's tail when he starts killing people.  We learn about his ex-wife and how she used to be one of his informants and how she used to be a drug addict too.  We meet his son and see that there are some major daddy issues there.  While Thornton is a good actor, all this family melodrama seems way out of place in this supposed action movie.  All it does is slow the plot way down.

And then you have the hired killer who is sent by one of the men Driver wants killed.  His job is to kill Driver before Driver kills the man who hired him.  His backstory and subplot is laughable.  He grew up with leg problems that required surgery.  He became a software developer who sold his company for $44 million and now seeks out new forms of excitement, part of which includes him taking jobs as a hitman for which he charges $1.  He has a hot girlfriend, played by Lost's Maggie Grace, whom he marries halfway through the movie.  All his subplot does is slow the plot down and create unintentional laughs at the ridiculousness of it all.

At least there's the action scenes, right?  Wrong.  While there is some action, it's very brief.  Driver mows through the people on his list like it's a grocery list.  One scene builds up so that you think it's going to be this massive hand-to-hand knife fight, but it lasts about 5 seconds.  None of them are a challenge in the least.  There's only a couple of scenes that generate any sense of excitement, but they are over much too quickly.

The movie also features some truly horrible dialogue.  Take this one exchange as an example.  One character, whom Driver is about to shoot, says, "I created my own hell".  To which Driver responds with sincere gravitas, "And I'm the demon who crawled up out of it." I laughed out loud at this point with how serious it was all said.

Johnson is actually a good actor.  I don't think he'll ever win an Oscar (although stranger things have happened), but he has charisma and he can deliver a line and hit his mark.  Here though, whatever talent he does have is completely wasted.

After seeing Johnson in so many family/children's movies, I was excited to see him in more adult fare where he could show an edgier side.  It's just too bad it turned out to be in such a stinking pile of shit movie like this one. 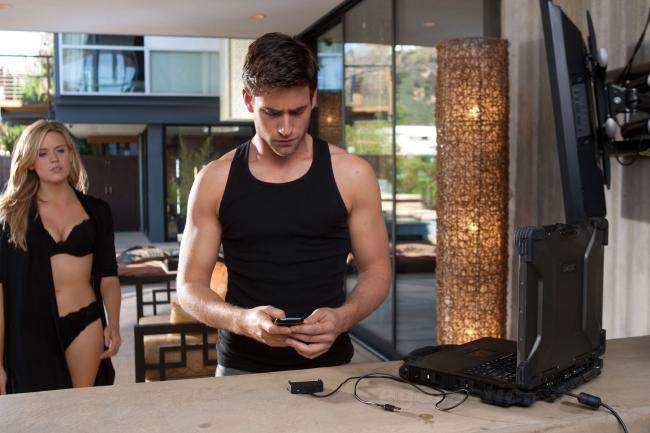 Faster is by no means a great film but it is also not what I would call, "...a stinking pile of shit movie..." either. The biggest area in which I agree with my brother is about the too brief action scenes. As the fighting is the movies selling point, there should have been much more of it and twice as much tensions generated from it. Reportedly, Johnson was made to spend two days learning to fight like someone who has been in prison for the bathroom fight scene, that lasts about one minute. I blame the lack of exciting action scenes on George Tillman Jr. who had never before directed such a film.

Otherwise, I liked this movie much more than Scott. We have three dangerously unstable characters heading for a showdown. Billy Bob Thornton as Cop is a man who, judging by the amount of informants he collected, must have have been an effective police officer at one time before becoming an addict. Oliver Jackson Cohen as Killer is a spoiled brat looking to constantly have new life experiences for the sake of out running a tortured youth. Dwayne Johnson as Driver is simply a man out for revenge.

Johnson is the film's star but he is playing the least interesting character of the three. He is a low life criminal from the first scene. His gang of criminals get murdered and he ends up in jail. Why should I care one way or the other if he kills any of these men or gets killed himself? The one and only time I felt we might see some depth was when he visits his old girlfriend and asks if the boy he saw leaving the house was his. Spoiler alert: He's not and so the scene proves pointless. Johnson rarely shows any emotions or weakness. He is basically playing a rock that kills people.

I never felt that Killer's plot slowed down the film in the least. In fact, I found him to be a far more interesting character than Driver. Killer has everything yet not enough. He is an adrenaline junky who enjoys a challenge. He is new and flashy while Driver is low key and old school. Killer has style while Driver wears the same old t-shirt the entire film. Killer analyzes everything while Driver works on instinct. Killer wants to be the best while Driver just wants to kill the guys who killed his brother. Driver kills without care of whether or not he leaves witnesses and a trail a blind man could follow.  Killer prefers to stay hidden.

The film boils down to a lesson about the decisions we make and the repercussions they create. It runs throughout the film but is spelled out in the scene where Driver talks on the phone with the son of the man he just killed. " I'm gonna find you and I'm gonna kill you." the son tells Driver, who warns him back, "You do what you need to do. But you better be sure, cause that's a long, dark road you're headed down." As Scott already wrote, the dialogue is nothing to brag about. The better line is when Marina explains, "Do you know what hell is? It's not fire and devils. All that stuff they taught you when you was little. We make our heaven and our hell while we're alive, Every time we cause pain, every time we cause suffering."

Faster has many good elements in it for a potentially good film but it never comes completely together. A little rewrite and a different director could have truly made this a much better movie.