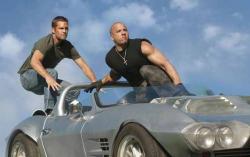 Paul Walker, Vin Diesel and a sweet car, that out performs them.

There is something innately sexy about sports cars moving at high speeds. I am not sure if it is the sleek style, the roaring engine or the sense of power the driver must be feeling. As long as the cars are moving, and no one is talking, Fast Five creates a sexy piece of fantasy action.

The gang from the previous movies get together in Rio de Janeiro for a huge heist. They want to steal 100 million dollars from a drug lord. FBI agent Hobbs brings a team to Rio to capture Dominic, Brian and Mia, as they are all on the lam. The movie opens with Brian and Mia rescuing Dominic from a bus taking him to prison. The whole thing is done with cars.

The first thing to get straight here is that the three leads and their friends are criminals. Why am I supposed to root for them? Just because they are stealing from a drug lord, does not endear me to them. We find out early on that Mia is pregnant with Brian's baby. Mia is a simple girl who just wants to steal a bunch of money and move with her boyfriend, baby and brother to a foreign country that does not have any extradition laws. Mia may be hot and look even hotter when behind the wheel of a nice car, but why should I care if she gets what she wants or not?

The fact that these morons cannot be found and caught goes to show how stupid the local police and FBI are. After stealing four police cars, to use in the heist, Dominic, Brian, Roman and Han decide to have a race through the middle of Rio, with sirens blaring and lights flashing. The Rock and Vin Diesel get into a couple of fights, but I again never cared who won. Vin Diesel is playing a criminal and The Rock is playing an idiot. At one point The Rock has Vin Diesel cornered, but tells him that he will let him go because he earned a 24 hour head start, and that he is still coming after him.

I guess that is my biggest problem with the movie. Who is the good guy? The film includes a quick line about how all the cops are crooked, so when police cars get smashed and pushed off bridges by Dominic and Brian, we never stop to think that the policemen inside those cars likely just died. After all that would make Dominic, Brian, Mia and company murderers.

As if this script was not bad enough, it throws in a bit of a love story. When The Rock arrives in Rio he has a local attractive young female cop work with him. He picks her because she is apparently that lone good cop. She has maybe two quick scenes with Vin Diesel but it is enough for them to fall in love.

A look at Chris Morgan's writing credits and it is clear that he likes fast cars and likes to include them in his films. When he does, his movies entertain. The best scene is when they steal the sports cars from the train. However, as soon as anyone opens their mouths to speak, it becomes clear he has no fucking clue what he is doing. 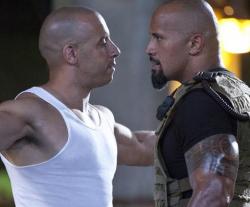 Vin Diesel and Dwayne Johnson argue over who has the sweatier bald head in Fast Five.

I had the same thought as you Eric. What is it about these guys that I'm supposed to like? There have been plenty of movies involving criminals where I've happily rooted for the “bad guys”, but here I just didn't find anybody all that likable. Then again, I didn't really find anybody all that dislikable either. There's just not that much personality one way or the other. They all look good and they can drive. That's about the extent of their personalities.

Not only is the writing poor, it's also sloppy. For instance, since when does the FBI have any jurisdiction outside of the United States? Just what organization does Hobbs work for that he can come into Rio and start bossing the local authorities around? Then there's one scene where one of the criminals impersonates an FBI Agent and visits a police station to tell them he wants to store some evidence there. The police officer never asks why or what for, but just takes the evidence to store it.

And in regards to sloppy writing, the majority of the film involves the planning of an elaborate heist. A big part of the plan involves the gang finding a really fast car so they can go faster than some oscillating cameras. Time and time again we are shown them racing through a training course trying to beat the necessary time. Then after a good 30 minutes of screentime, they decide not to bother and just steal some cop cars instead. Then, on the day of the heist itself, they decide to scrap the whole plan and just bust through a wall and drag the vault away instead. Well, why and the hell did we have to sit through all that planning and learning about all the different skills of each of the gang members, when absolutely none of it ever really comes into play? We could have eliminated at least 45 minutes out of its way too long running time of over 130 minutes.

Like you Eric, I did get some enjoyment out of the action scenes and the many car chases, no matter how ludicrous they might be (note how the length of the chain dragging the vault seems to grow and shrink depending on the shot). That is definitely when the movie excels. The big fight scene between The Rock and Vin Diesel would have carried more weight if The Rock had been written more as a villain. As it is, you're right Eric, who should I be rooting for during it?

I had heard there was a post credits sequence, so I stuck around out of curiosity just to see what it was. I won't give the big reveal away, but it meant little to me as I hadn't seen any of the earlier movies in the franchise. I can say that a woman sitting three seats behind me, actually gasped and yelled something at the screen after the brief scene, so maybe if you're a big fan of this series you should stick around to see it. If you're not fan, you'll probably be in a hurry to get the hell out of the theater.