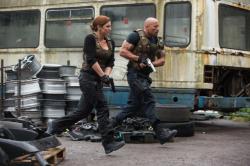 Like the previous film in the series (and probably the four before that, but I haven't seen them), this one is loud, dumb and overly long, with a modicum of mindless entertainment mixed in here and there, mostly in the action scenes. It's certainly not a movie where thinking is required since if you do you'll realize how many plot holes there are in the script. It will probably satisfy fans of the increasingly long series, but is unlikely to win over too many new ones.

There is a plot, but if you're curious about the details then you're probably not the film's target audience. The gimmick this time is that Dom (Vin Diesel) and his gang are working for the good guys. Agent Hobbs (Johnson) wants them to help him stop another gang of drivers who are stealing military assets to build a vaguely described weapon of some sort. In return for their help he agrees to provide them with pardons for their previous crimes and most tantalizingly, he shows Dom a photo that proves that Letty (Rodriguez) didn't die in an earlier film after all and that she is now working for Shaw, the film's villain. Their quest to stop Shaw takes them from London to Spain in many different forms of transport, all of them fast and some of them furious. It's all just an excuse to get the stars in cars and fistfights.

The action, while enjoyable, is often over the top to the point of lunacy. This is most noticeable in the scene on the highway with the tank. Not only is there rampant carnage and car-nage, but in the film's most laugh-out-loud moment, Dom leaps from his moving car to catch Letty, who has been thrown off the tank, in mid-air over the gap between a bridge, causing them both to land on the hood of a car on the other side. This smack your forehead at the silly audacity of it all is hardly limited to this one scene though, it extends over the whole thing, from the chase in London to the finale on the airplane which has featured heavily in the promos.

It is the action scenes outside of the cars that actually work better. One of the best new additions to the film is Gina Carano as Hobbs's assistant. Carano proved in Haywire that she's the best female action star working today and she demonstrates that once again here. Her fight with Michelle Rodriguez is the best scene in the movie. For heaven's sake, someone cast this woman as Wonder Woman already!

Given the silly nature of the plot, it seems nitpicky to point out the holes, but here's a few. The final piece of equipment Shaw needs is stored in a military base, guarded by an army. Hobbs decides, because it's "protocol", that he will move this final piece in a military truck guarded by two jeeps. He knows the gang chasing this thing work best in vehicles, on the road, but somehow thinks this is a good idea anyway? At one point Shaw is being held captive, but he convinces those holding him to let him go, otherwise he will order a hostage to be killed. As soon as they let him go, he decides to call and have the hostage killed anyway. They are able to stop this by jamming his cellphone signal. Well, if all they had to do was jam his signal to keep the hostage alive, why didn't they jam it and then not let him go? Or how about, just how long is that runway during the film's climax? It would have to be several miles long to accommodate all of the action that takes place during that scene. Because of these points and many others, too numerous to mention, it's best if you just don't think about things too much.

Although there's plenty of action, hot girls and muscular guys, it's all kept very rated PG-13. There's very little blood and zero nudity. It's got as much edge as two five year old children playing with Matchbox cars in a sandbox, which is possibly where the script came from. Even for a big budget, summer popcorn movie, this one is check your mind at the door stupid.

Fans of the earlier films will probably find more to enjoy here than I did, but they're likely to be the only ones. 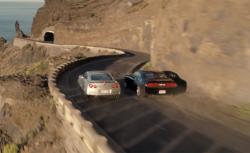 The best scene in the film.

Fast & Furious 6 is completely forgettable as far as genuine entertainment goes. To be fair, you may enjoy this movie if you have the mentality of a child and think playing Grand Theft Auto is a valuable way to waste several hours. I doubt I will be able to differentiate any of these films from each other in a very small amount of time. Except to the diehard fans, this movie only means one of two things.

I have no idea what Paul Walker was like in real life, but on screen he almost always played the good guy. Even when we at first thought he was a morally questionable character, he usually turned out to be on the right side. Here he plays a new father. His character in the Fast and Furious films has always been that of the “nice” guy who befriended some criminal types who turn out to be not so bad.

The fact that Walker died from being in a hot car going at an accelerated speed is something that will hang over these fantasy films for as long as people remember him or care to watch these movies. Many characters get into accidents in these films but based on their place on the credits, often walk away unscathed. Walker’s death was a warning of just how unrealistic these films are but let’s be honest; we do not want to be reminded of that.

The Fast and Furious films are a car lover’s fantasy. The plots are superfluous. The opening scene where Walker and Vin Diesel are racing each other on some curving seaside road in Spain is my favorite in the entire film. There is something intrinsically sexy to many of us about a nice car going at a high rate of speed.  The freedom and independence it represents is extremely attractive. As this is a movie, no one gets hurt, not even when they each speed through a town with pedestrians and, of course, no law enforcement shows up.

The other thing causing some conversations about this film is because of the fan boys. Gal Gadot was cast as Diana Prince for the Superman/Batman film. Most fans wanted Gina Carano as she has the physical presence, experience and required sexiness to pull of the larger than life role. Gadot, for her part, is taller and cute. They share some screen time here and it is interesting to compare them if you want. Carano looks as if she could kick your ass while Gadot looks as if she could show you a good time in bed. Hey Zack Snyder, fess up.

These movies are critic proof but for what it's worth here's my two cents. Fast & Furious 6 is a mindless spectacle of relentless over-the-top action that follows the same formula every other big budget action movie made during the last 20 years has followed. There's always an opening action sequence where we meet the bad guys, then we watch the crew of heroes being assembled before they travel to some exotic location and kick some serious butt along the way. All of which leads to some unbelievably ridiculous finale, before the final scene that tries for some heart. I'd never seen any of the Fast & Furious movies before watching this one but I knew exactly what to expect.

The gang of actors is likable enough even if none of them can act their way out of a paper bag. Their enthusiastic camaraderie makes the stupid plot and insipid dialogue palatable at least. But there is very little to offer here except racing cars that go zoom, bone-crunching fistfights, and loud colorful explosions. The climax on that runway is beyond ludicrous. Vin Diesel is somehow able to drive a car through an airplane that is one big ball of flames without getting burnt. Hell he doesn't even get a scratch.

The final scene where the characters are at that celebratory barbeque demonstrates the complete lack of acting talent in the entire cast. Sure with Paul Walker's untimely death, it has a certain sadness to it, but I was too busy laughing at the horrible acting to feel any emotional impact. That final goodbye between Diesel and Johnson should have won them both a Razzie Award since it's impossible to tell which is the worse actor. And the script is filled with clunkers like when Michelle Rodriguez says to walking mountain Kim Kold, “Klaus, aren't you team muscle? Don't make me go over there and make you team pussy.” Scott, I think you were on to something when you said this script may have been written in a sandbox.

At one point, I'm told, this series was all about fast cars and the men who drive them furiously. You wouldn't know that from this installment. When you have tanks driving down highways, and cars being driven down the world's longest runway while attached to an airplane that is attempting to take off, you know things have gotten out of control. I cannot imagine where this series will go next with the upcoming seventh movie in the franchise. About the only place left is for them to pull a Moonraker and go into orbit. Or maybe they can have a car race on the moon. My one hope about Fast & Furious 7 (and I write this from the bottom of my heart) is that neither of my brothers reviews it.