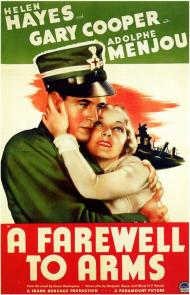 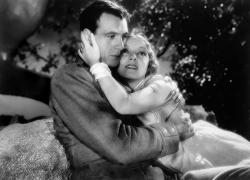 Gary Cooper and Helen Hayes in A Farewell to Arms.

Based on the Ernest Hemingway novel, A Farewell to Arms tells the love story between an American ambulance driver and an English nurse in Italy, during World War I.

Cooper stars as Henry, an American who volunteered to help the Italians fight the Germans during World War I. He first meets Catherine during a bomb raid. He is drunk and she is in her nightgown. They fall in love, but he gets sent back to the front. He gets wounded and is sent to the hospital where she has been transferred to. They do the deed and he gets sent back to the front. Unknowns to him, Catherine is pregnant and goes to Switzerland to have their baby. Henry deserts and goes looking for Catherine.

The best that I can get from this movie is that it shows how love changes a man. The very first shot of Cooper is of him sitting in the front seat of his ambulance full of wounded soldiers. His feet are up and his hat is down. He is very relaxed and uncaring. Compare that to the last scene where Henry is crying at Catherine's bedside. It is two different men. The journey of A Farewell to Arms is Henry going from carefree young man to emotionally overwhelmed adult.

A Farewell to Arms, made in 1932, comes across a bit melodramatic. As Catherine lies dying in her hospital bed, Henry says, "You can't die. You're too brave to die." I am not sure if that line is from the book or not. Either way, it should have been left out. Cooper is a great actor and he carries this scene as well as the entire movie. Him crying over Hayes is enough to convey the scene's emotions.

A Farewell to Arms is a short story and the movie is not even an hour and a half long. From a puppet show to an opera singer, the movie seemed to be padded with pointless scenes to try to stretch it out. If the makers of this film wanted to lengthen it they should have added some action scenes and cut the fluff. Henry goes to the front several times. Their was plenty of opportunity for action. 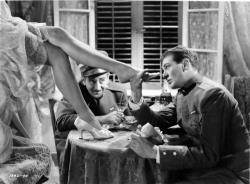 Adolphe Menjou and Gary Cooper in A Farewell to Arms.

"In the late summer of that year we lived in a house in a village that looked across the river and the plain to the mountains," is the first line in Hemingway's novel. It contains his distinctive style and is as good an example as any as to why no movie adaptation will ever equal his writing, because what makes Hemingway's writing so great isn't the characters, the plot or other events that can be easily reproduced, but rather his short sentenced, adjective deprived, forceful style.  It's the same reason there's never been a good adaptation of a F. Scott Fitzgerald novel.  For these two great authors it was never about what happened in their books, but rather the style in which they wrote about what happened in their books.

Eric, you mention the lack of action and there are several incidents from the novel that they could have included.  One of the greatest scenes in the book is only glossed over in a sans-dialogue montage.  There's a chapter dedicated to a retreat following a lost battle that is one of the most tense moments in the novel.  Following the retreat a group of soldiers are rounding up officers, including Frederic, because they blame them for the loss, and are executing them one by one.  Frederic barely manages to escape by jumping into a river and swimming to safety.  They certainly could have included more of these scenes to add action to this movie.

As for the film being short, they could have lengthened it simply by putting back into it the numerous chapters they excised from the book, including the time Frederic and Cat spend together in Switzerland.

There is definitely melodrama to spare here especially in the dialogue.  Whenever Catherine or Frederic profess their love for each other the melodrama comes out of the woodwork and at times the story does become unbearably sappy.

The plot does benefit from being produced during the pre-code period.  Frederic and Catherine have sex and she gets pregnant.  It's true that they have a priest say a few words over them, but clearly they aren't really married.  At the beginning of the film Frederic tells Rinaldi that he wants to go to the whore house, clearly to get laid.  It's nice to see soldiers behaving as grown-ups.

Cooper does a decent job in the lead.  Apparently he was a Hemingway fan since he would play the lead in For Whom the Bell Tolls nearly ten years later.  Hayes is so-so, but does nothing particularly special.  I also never really felt that the two shared any great chemistry.

The ending of the movie epitomizes the melodrama and the differences between the book and the movie.  The movie ends with the end of the war and Frederic carrying Catherine to the window while he proclaims, "Peace, Peace!", while the book ends with the fabulously understated line, "After a while I went out and left the hospital and walked back to the hotel in the rain."  A line given more meaning by the book's constant use of rain as a symbol for death. 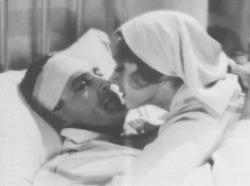 Gary Cooper and Helen Hayes in Ernest Hemingway's A Farewell to Arms.

I’ve never read the novel (although it’s on my bucket reading list) but I do know Ernest Hemingway disliked this screen version. The only thing about it he approved of was the casting of Gary Cooper as Lt. Henry. They were mutual fans and became good friends. It was Hemingway that insisted on Cooper being cast in For Whom the Bell Tolls. They remained close until they both departed this mortal coil in 1961.

This picture was a hit in its day, pleasing audiences and critics alike. It was nominated for four Oscars including Best Picture (losing to Cavalcade). It took home the gold for Cinematography and Sound Recording. The camera work is quite intimate. Especially in the scene where Frederic gets wounded and we see the world through his eyes, peering up at the ceiling with Catherine’s face looking down at him in extreme close-up.

The supporting players are memorable. Adolphe Menjou is good as Major Rinaldi, the jaded surgeon who tries unsuccessfully to keep Frederic and Catherine apart. I enjoyed his hearty Italian accent, “Ciao Baby!” And Jack La Rue successfully plays against type as the sympathetic priest. He was best known at the time for playing tough guys.

Hayes and Cooper give heartbreaking turns as the star-crossed lovers. He is very effective during the final twenty minutes and Hayes demonstrates the talent that earned her the honorary title “First Lady of the American Theatre”.

Yes it’s all a bit soggy but A Farewell to Arms still provides an emotional kick in the guts with its tearjerker ending. 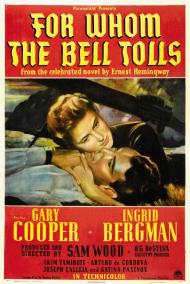