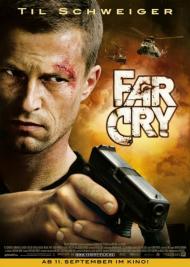 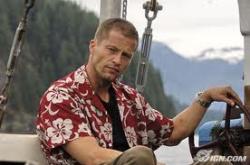 Til Schweiger as Jack Carver

Far Cry is based on a video game originating in Germany. I had never heard of it, but then again I do not play video games. I have no idea how true it stays to the game. I like Til Schweiger in Inglorious Bastards, and decided to give another one of his movies a look.

Although made by a German company, the film takes place in the Pacific Northwest Canada, and the version I saw was in English. A reporter, Valerie, goes to visit her uncle on an island where secret military experiments are happening. He has been feeding her information and she wants to have a story.

She hires a tour boat, captained by a former special forces member, Jack Carver. As soon as they get to the island they are met with hostility and are forced to fight for their lives. The best action piece is when they are both in a stolen military jeep being chase through the woods. Jack runs out of bullets and has Valerie look for weapons in the back seat. She finds hand grenades, but has no idea how to use them. She eventually finds some kind of grappling hook gun. She accidentally shoots it and it catches a helicopter, which just in the nick of time saves them from going over a cliff.

The resident "mad scientist" is injecting soldiers with something that makes them impervious to bullets. It causes them to turn whiter than Edward Cullen, and insanely violent. Jack has to kill many of them as he fights to save himself and Valerie. She meanwhile, is looking for her uncle, played by Moeller, (Gladiator) who looks old, even before he turns white.

The excitement in this film can be enjoyed for what it is, mindless gun fire. I have seen far better, and far worse action films. If it had just stuck with that it would have been passable. It really loses itself when it tries to include humor and romantic comedy.

At one point, Jack and Valerie are running for their lives from an army that is trying to kill them. They decide to stop for the night at a conveniently located cabin, where Jack gets into bed with Valerie using the line that he is cold. They have sex, and the next morning the big bad, macho special forces trained Jack suddenly turns insecure and asks Valerie how he was last night. She responds that he is a two. Later Jack gets tied up to an overweight food delivery man who becomes the comic relief. He is not funny, and ends up lessoning what little tension the film has.

My last comment is more of a question. Do people outside the United States see American tourists as obnoxious? It seems to be a recurring stereotype in movies. The film is book ended with Jack having to deal with the same arrogant American couple wanting to chart his boat. See In Bruges for another example.