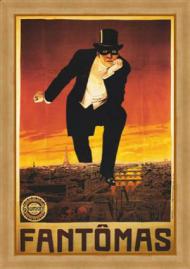 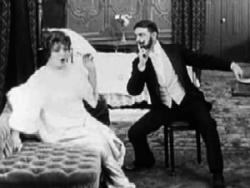 Fantomas was produced in 1913, nearly 100 years ago at the time of this writing. You can certainly see from a technical standpoint how far movies have come since it was made, but at the same time you can see how in terms of narrative, stories really haven't changed all that much.  It also goes to show that cranking out sequels is nothing new.

I'm not the silent film buff that Patrick is and I'm sure that both he and Eric have seen more of them than I have, so I'm not the expert that they are, but I have to say that to me Fantomas seems very sophisticated for such an early film.  It runs nearly a full hour, contains a full-fledged plot, some distinctive characters and a small amount of action.  Even the acting seems more natural than I expect from a silent film where too often everything was over emoted.

Five Fantomas movies were produced in France by Gaumont studios from 1913 to 1914, of which this is the first.  They were based upon a popular book series of the day.  Part of what makes them unique is that their title character is a ruthless villain.  It would be similar to the Sherlock Holmes books being written from Moriarty's point of view, or the James Bond movies filmed from Blofeld's perspective.

The movie opens with Fantomas robbing a Princess of her pearl necklace and 120,000 Francs in her hotel room.  A master of disguise, Fantomas escapes by disguising himself as a bellboy, but not before leaving his trademark, blank business card upon which slowly appears the single word, Fantomas.

Later, when Lord Beltham goes missing, Inspector Juve is assigned to the case.  Juve and his sidekick, Fandor, a newspaper reporter, suspect that Fantomas may be involved and set out to track him down.  They become Fantomas's nemesis throughout the series.

Like a lot of movies of the period, the camera never moves during a shot.  Each scene is filmed like a play with very few edits during each of them.  Despite this, there is often a lot of movement going on, particularly during the opening robbery in the hotel as people run around trying to figure out what happened.

The movie also makes good use of letters and telegrams to tell the story.  When Juve is assigned to the case, rather than having a title card appear explaining that he was the detective on the case, the news is given to him by a telegram shown on the screen.  It helps the flow of the story move along better than the cards do because you aren't taken out of the scene.

By today's standards of course this movie is very crude, but you can certainly see how for the time it would have been enjoyable and indeed, even now there are things to like about it.  The character of Fantomas is intriguing and you can see why his stories were so popular and why they keep being revisited.  In fact there's a brand new Fantomas due to be released in 2011 with Vincet Cassel and Jean Reno as Fantomas and Juve respectively.  Having seen this early version, I'm definitely intrigued to see a modern one. 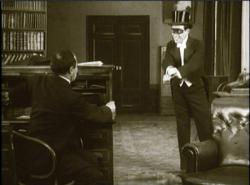 Edmund Breon and Rene Navarre in Fantomas - In the Shadow of the Guillotine.

The story takes place in June, 1911 and March, 1912, exactly 100 hundred years ago at the time of this writing. The dates are given away in letters and telegrams that Scott mentioned as being clever devises used in place of the more common and generic title cards. I agree that the filmmaking and storytelling involved here are quite sophisticated for 1913. It is also no surprise that four sequels were made as the story ends like a serial with Inspector Juve vowing to catch the elusive Fantomas.

At 54 minutes, Fantomas – In the Shadow of the Guillotine is on the cusp between a short and a feature length movie. European filmmakers were ahead of the curve in terms of running time. DeMille’s The Squaw Man - the first feature length movie to be shot in Hollywood - wouldn’t hit theatres until early in 1914.

SPOILER ALERT: The climax of the story uses the old mistaken identity routine. Fantomas is a master of disguise you see. An actor portraying the infamous villain, and reenacting his exploits onstage, is tricked into taking the criminal mastermind’s place in jail and nearly gets executed in his stead. Only the sharp eyes of Inspector Juve save him at the last minute.

This first installment in this early French movie serial is impressive. Good use is made of the photographic dissolve. The story sets up the characters well and leaves the audience wanting more. It is also an early case of the bad guy being the star. While Inspector Juve is on the side of justice the movie (and thusly the audience) roots for Fantomas to succeed in his illegal endeavors.

Fantomas – In the Shadow of the Guillotine is a must see for fans of early silent film. 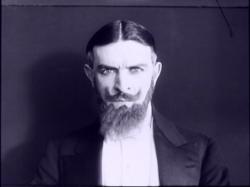 Two years after Scott wrote about a remake, it is still in limbo. There have been however, many Fantomas films made in Europe over the years since this first screen appearance. There was even a television mini-series in 1980. The charming rogue thief is an iconic character dating back to Robin Hood. A remake could definitely be a success if done correctly. My choice for Fantomas is Jean Dujardin.

I too was impressed by how well the production value was on this early film. Although the camera is stationary, the direction is very professional. I have seen many silent films made at this time where the tops of actors heads are cut off, as the camera angle was too low.

I love the look on every ones face when they see "FANTOMAS" on the business card. Their eyes get big and their mouth opens a bit. His name alone is enough to stir emotions. It is as funny as it is dramatic.

The book this film is based on was published in 1911, making this an early example of a contemporary novel turned into a screen adaptation. The books were written by two men, Marcel Allain and Pierre Souvestre, who would each separately write a chapter and then get together on how to connect them. The film plays out in chapters as well. Translating novels into screenplays had yet to be perfected, but this was a great place to start.