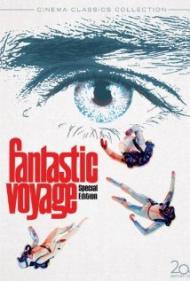 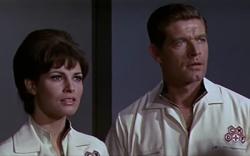 Fantastic Voyage was Raquel Welch’s first starring role but it would not be until later that same year with One Million Years B.C. that she became a superstar. Fantastic Voyage is a better film but Welch’s talents were not properly utilized. That is to say, she has short dark hair and never shows any skin. For One Million Years B.C. she wore the fur bikini and her hair was long and dyed blonde.

Fantastic Voyage begins like a spy film with a scientist escaping from behind the Iron Curtain with the help of Grant, a CIA agent, played by Stephen Boyd. Driving away from the airport they get attacked and the scientist injures his head, resulting in a blood clot forming in his brain. Grant is then taken to a secret underground government facility that has the means to shrink humans and objects. He is directed to join a group of scientists that are going to be miniaturized inside a vehicle that will be injected into the comatose patient so as to find and destroy the blood clot.

For some reason, they have only one hour to get in, destroy the clot and get back out. The rest of the film pretty much plays out in real time. We see the journey inside the human body as well as the technicians monitoring them on the outside.

The special effects are decent enough. There is no need trying to bring up what is and what is not anatomically correct. Just accept it all and have fun. Although there is one scene where Welch is scuba diving outside the vehicle where her foot accidentally hits the side of some body part and you can tell that it is nothing more than some hanging fabric designed to resemble a part of an organ.

This group of inner space adventurers must battle blood circulation currents, aggressive white blood cells and a traitor among them. It all makes for a wonderful science fiction film. At one point, Welch gets attacked and covered by cells. The men pull her into their vehicle and begin pulling them off of her. Notice that one guy grabs one directly from the top of her right breast. Speaking of her talents, in another scene, Boyd grabs Welch by the arm to stop her from sliding away. If you watch Boyd’s eyes, the entire time he is trying to hold Welch in place he is staring at her breasts.

However, according to Welch, Boyd was gay. Speaking at a film retrospective in New York three years ago, she said, “He was so hot with his cleft chin and he was so not interested in me.” She described how she tried to seduce him while in New York on a publicity tour for the film. She invited him into her hotel room, “for a drink” but he turned down her offer saying, “An actress is a little bit more than a woman, but an actor is a little bit less than a man.” She immediately took that to mean he was gay. I found it more interesting when I found out that the Irish born Boyd was up for the part of James Bond before it went to Sean Connery.

Fantastic Voyage is not some great film that deserves a cult following but it moves along fast and entertainingly enough to keep you interested throughout. If only they could have talked Welch into doing at least one scene in a bikini. Hey, she could have had one on below her scuba suit. 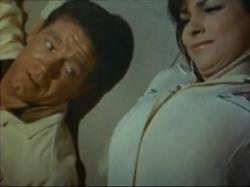 In regards to Welch, it does seem like a wasted opportunity not to have her show some skin, but even in the all-covering wet suit, there's no hiding her talents. While that may sound sexist, it's nothing compared to the attitudes in the film where one of the Generals at first refuses to allow a woman to even go on the mission. And let's be honest. When you hire someone who looks like Welch you're hiring her for a specific reason. The bigger sin is the extremely unflattering hairstyle she's forced to wear. As unpleasant as they are though, the hair and modesty are in line with the film's very realistic approach to a farfetched idea.

The special effects are decent enough for the time, but the technology is laughably inconsistent. The writers created several advanced technologies to accommodate the story, including the ability to shrink anything down to microscopic size and laser guns, but the submarine can only communicate via Morse code and the charts of the human body are generic line drawings on paper. Also in regards to the technology, as Eric noted there is an arbitrary hour deadline added to the shrinking technology that is obviously included for no other reason than to bring a ticking clock element to the story.

Although it's an entertaining story, it's not a very deep one. The characters are never fully developed. Boyd is steely-jawed as Grant, but is a rather bland hero. The traitor's motivation is never deeply explored, but I guess in those days it was enough to say he was a communist. Still, it makes you wonder how someone with his political persuasion could have gained a position of such trust. Two of the most enjoyable characters are the Colonel and the General on the outside who occasionally bicker like an old married couple.

To help promote the film, the producers approached Isaac Asimov to write a novelized adaptation of the story. At first he rejected the idea, seeing it as hackwork, but was eventually persuaded to take on the job. In the process he corrected several of the plot holes that are still present in the filmed version, such as the fact that the laser gun, the remains of the Proteus, and gallons of saline solution are left inside Benes's body and never mentioned, even though they should be about to regain their original size and thus destroy the patient. Asimov was also approached in the 1980s to write a sequel, but he didn't care for the idea of having a Soviet and an American sub doing battle inside a human body, which was the outline he was given, and so nothing came of the idea.

With everything in the film treated with the utmost seriousness, a little more comic relief would have helped move things along. As it is, it's entertaining enough, but falls short of being truly great.

From a purely entertainment viewpoint, Fantastic Voyage has become dated and rather silly. However, if the viewer is able to step outside of time (so to speak) and watch the film with fresh eyes it remains a creative and imaginative, well-made piece of celluloid. What time has done to the movie is to add a layer of camp to it. There are plot holes galore and some of the special effects now look positively prehistoric, but the CinemaScope holds up as do the performances from the cast, all of whom play it very seriously.

Scott, you wrote that when hiring someone who looks like Raquel Welch you're doing so for a specific reason. Namely her curvaceous figure and stunning beauty. I agree, but the same can be said of Stephen Boyd. Surely his chiseled face and well-built physique got him into the movies in the first place. It certainly wasn't his Shakespeare. I have no idea whether or not Stephen Boyd was gay (although I secretly hope he was) but I do know that he died tragically young of a heart attack at the age of 45 in 1977, less than ten years after making this movie. He and Welch made one incredibly attractive pair.

The rest of the cast is filled with reliable old faces including Donald Pleasence (in villain mode), Arthur O'Connell, Edmund O'Brien and Arthur Kennedy. Also the future Mr. Barbra Streisand himself, James Brolin, has a bit part as a technician. But to be honest the cast takes a backseat to the special effects and the sci/fi storyline.

I disagree with Scott in that I don't think the script or acting needed to be intentionally campy - although I concede his point that a little more levity might have moved things along a bit faster. But it's the fact that they all play it so straight that makes it campy, since camp works best when it's unintentional. And despite the primitive nature of the special effects, Fantastic Voyage still looks pretty damn good. Like Eric said, just sit back, suspend disbelief, and enjoy the ride.