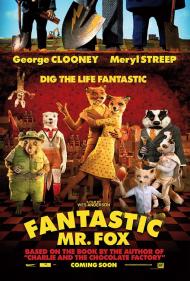 Wes Anderson puts his usual quirky style into the story.

There's one word that's seemingly always associated with a Wes Anderson film and that word is quirky. Rushmore, The Royal Tenenbaums, The Darjeeling Limited, along with everything else he's ever been attached to all share his slightly skewed viewpoint. Fantastic Mr. Fox, Anderson's stop-motion adaptation of the Roald Dahl book, is no exception as it is undeniably quirky. As with all of his films, how you feel about his story telling style will determine whether or not you enjoy this one.

The only Roald Dahl stories I've ever read are Charlie and the Chocolate Factory and its sequel; The Great Glass Elevator, so I'd never even heard of Mr. Fox or his Fantasticness. Turns out he is pretty good. I'm not quite sure I would go so far as to say fantastic, but he's no slouch; especially as voiced rather cockily by George Clooney.

When the story starts Mr. and Mrs. Fox are chicken thieves in the middle of a job, but when Mrs. Fox (Streep) announces that she's pregnant just as they're caught in a trap, she makes Mr. Fox promise that if they escape then they will give up thieving and settle down into a safer lifestyle. It's a promise that lasts a few years, but when the Foxes move into a new home right next to three farms that each containing tempting targets, Mr. Fox is drawn out of retirement one more time. The fact that the farms are owned by three of the meanest farmers ever, does little to deter him and soon all hell as broken loose as the farmers declare war on the woods when they discover their products have gone missing.

The animation is deceptively simple looking. It's stop-motion style, but it's not as smooth as Aardman's Wallace and Gromit. It also lacks depth seeming two-dimensional more often than it seems three. However, the look really suits the story and comes across very much like a storybook. It's highly stylized, but it works.

One thing I was expecting, based upon the previews, was for it to be more of a comedy. There are some funny moments in it (Fox's opossum sidekick gets the most laughs), but it's not as funny as it has been marketed to be. Occasionally it tries to be heartwarming, which for me were the weakest moments.

Obviously the book is aimed at children, but I wonder how they would react to the movie. It doesn't seem particularly to be made for them, more for Wes Anderson fans. At least it doesn't talk down to them.

I've yet to see a Wes Anderson film that I didn't at least partially enjoy. Sometimes I can get quite annoyed when a director imposes his style so much onto a story. Generally I just want them to get out of the way and let the story tell itself. With Anderson though, it's generally his style that is just as important as the story and apparently that doesn't matter whether it's live actors or animated animals. 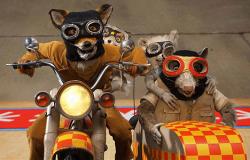 Scott, you forgot James and the Giant Peach, which was also written by Roald Dahl. But like you I was unfamiliar with this character and story. I agree that the animation is somewhat flat and lacking in depth but it does work as a moving storybook. Even the jerky motion of the characters works. Anderson has definitely created a consistent style throughout the movie.

What you didn’t mention is that this is really an animated action flick. Once the three farmers decide to kill Mr. Fox the action pretty much never lets up. Sure the tension level can only go so high given the obvious constraints of the story and medium but nonetheless I found myself caught up in the adventure of it all.

The story does however seem to be sending a rather muddled message. The humans are all villains in this world. On one hand the theme seems to be about the ways that man will use any destructive means necessary to exterminate pesky animals. The results of which are far worse than the minor annoyances the animals caused in the first place. The other hand though, is busy personifying animals to the point where they are essentially no different from us. This renders any point about human behavior moot. Or perhaps I am reading too much into a simple story?

This is one of the rare animated movies I have seen where there is actual character development going on. Mr. Fox goes through his mid-life crisis, “I’m 7, my father died at 7 ½”, which leads to all the trouble. Along the way he brings the animal neighborhood together and his son matures and learns several life lessons along the way.

I loved the use of titles to set the different scenes. It reminded me of silent movies. There is also some clever dialogue. After the noble death of the rat that formerly guarded one of the farmer’s gallons of hard apple cider, Mr. Fox’s son states that he (the rat) redeemed himself, to which his father quips, “Redemption? Sure, but in the end he’s just another dead rat in a garbage pail behind a Chinese restaurant.” In another scene a character references Rebel without a Cause by imitating James Deans’ line about his parents, “You say one thing, she’s says another and then everyone changes back again!”

With the exception of classic Disney cartoons I am not normally a fan of animated movies. I was pleasantly surprised to find myself thoroughly entertained by Fantastic Mr. Fox. 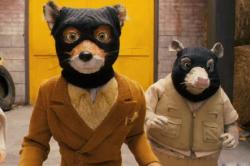 Fantastic Mr. Fox is an odd little children's story.  Mr Fox sneaks on to farms and kills and eats chickens.  Later Mr Fox and his family are being pursued by the farmers who clearly want to kill them all.  Am I supposed to hope that the foxes will get away?  They killed and are now being hunted.  So be it.  Like Patrick, I feel the message is muddled.

I am not all sure what message or moral this movie is supposed to contain.  According to an article written by the author's daughter, Lucy Dahl,  the moral is, "no matter how hungry you might be, always sniff more than once before you leave the foxhole. If you don’t, you might lose your tail."  Sure, okay, whatever.

There are some humorous moments to be found.  Fox and Kylie the Possum have a nice repoirte.  Fox gives instructions while Kylie looks on with a blank expression.  You never know what he actually understands.  Like Scott wrote, he is a comic scene stealer.

The film makes some nods to an odd selection of films.  Patrick mentioned  James Dean's line from Rebel Without a Cause.  Later the rat dances threateningly while snapping his fingers as if he is in a West Side Story rumble.

Scott once wrote, "I always find it annoying when movies portray animals acting like humans. It never makes any sense."  The only way to make animals act as humans and still make sense, is to give them human personalities, intellect and make them vegans.  How can we feel any empathy for a fox being hunted and killed when he hunts and kills himself?