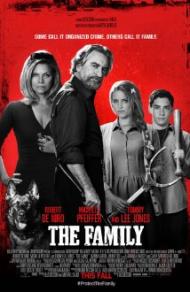 Robert De Niro and Michelle Pfeiffer in The Family.

As a filmmaker Luc Besson may know his way around an action flick but if The Family is any indication he doesn't understand squat about comedy. The very few laughs in this movie seem to come in spite of his direction rather than because of it. The pacing is too slow for comedy, the editing is a bit muddled, and at times the tone shifts awkwardly towards the melodramatic.

The script is yet another take on the old fish-out-of-water set-up. It is based on tired old gangster picture tropes and peopled with stereotypical Italian American mobster types. The central family of wise guys, father/mother/daughter/son (think Sopranos) gets plunked down in a small village in Normandy and hilarity ensues. Or not.

Robert De Niro and Michelle Pfeiffer play husband and wife (in their third movie together they finally get to share the screen). He snitched on a powerful NYC mob boss some six years prior to the events in the movie. His entire family was placed in the Witness Protection Program but due to the fact that they can't seem to stop their criminal behavior they keep having to move to a new location every six months or so.

Without giving away too much, each member of the Manzoni (now calling themselves Blake) family has a separate storyline as they attempt to fit in in their new community. Each one of them breaks laws and violently attacks locals for various reasons. Somehow they are never arrested for any of these crimes. Tommy Lee Jones shows up a few times playing the FBI agent assigned to keep tabs on the Manzoni's. Both he and Robert De Niro are at least a decade too old for their roles.

Unlikely plot coincidences have a long tradition in movies, especially comedies. There is one in The Family that is so completely preposterous that I can only hope it was meant to be intentionally funny. But given the tone of the rest of the film I honestly don't think it was. Again I won't give it away but trust me, you'll recognize it when you see it.

We are meant to sympathize with the Manzoni family but we aren't given a reason to do so. They are all a bunch of violent psychopaths. I wouldn't have minded this if the script was actually funny. But it most decidedly is not. I did enjoy Pfeiffer's gangster's moll accent and the climactic gun battle is excitingly filmed (I told you Besson knows action) but The Family is so bad it's very nearly a crime. 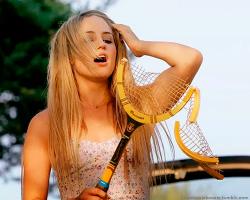 Dianna Agron in The Family.

This is a fish-out-of-water movie, but the real fish out of his element here does seem to be director Luc Besson. As Patrick wrote, he definitely knows his way around an action scene, but the comedy is very uneven. Although it might not be entirely his fault, the majority of the blame must fall on him. After all, he not only directed this turkey, he also co-wrote it and produced it.

One of the very few good things about the film is the cast. De Niro and Jones are both too old for their parts as Patrick said, particularly Jones, who looks as though they had to wake him up for his takes. De Niro, while more likely to be a grandfather than a father, does a good job as the patriarch. Pfeiffer is also quite good as the wife, as are Agron and D'Leo as the children. Unfortunately, the script doesn't nearly live up to their potential.

There are some amusing scenes, but I agree with Patrick that the tone shifts too far from scene to scene. Each member of the family is wronged at some point in the movie and they all have extreme reactions to it. For example, when a local boy makes unwanted advances on Belle, she beats him bloody with a tennis racket. This reaction, coming as it does from this sweet little girl-next-door type, is over-the-top and comical, however, it also marks her and her family as violent sociopaths. You can no longer really treat them as real people, which makes the attempts at drama completely pointless. If we're going to take this family seriously then they become impossible to like. It's only as caricatures that they can get away with being so vile.

I likewise have to agree with Patrick about the ludicrous coincidence that brings the movie to its climax. It's so unbelievable that Besson must have meant it as a joke, right? However, it's not played that way and no one in the film comments on it and so I can't say for sure. One thing is for sure though. While the characters in the film might be able to take it seriously, no way can anyone in the audience.

The central plot of this movie certainly had potential. It even has the occasional moment where I thought it might come close to meeting it, but then it would quickly take a nosedive and any potential it had is completely wasted. 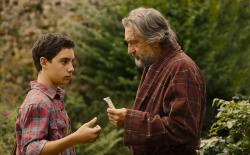 For La Femme Nikita (1990), Besson created a violent, murdering character and over the course of the film talked the audience into sympathizing with her. Here, as my brothers wrote, he is not able to pull that trick off again. Considering that the wife and children are innocent to the events that lead them to being in hiding, it should have been easy for us to feel for them. However, Besson never gives us that scene where we hear or see the wife or children truly struggle to the point that we understand their frustration.

De Niro playing an aging, not at all retired, gangster for laughs is a gimme. Lying to his wife about the body he just buried in the backyard is his makeup. He has probably been there so many times he can say it without the slightest hint of nerves. Him using brutal force around town to get his way is likewise acceptable for his character because that is how he has always gotten his way. Just because he informed on someone does not mean he changed his personality.

That makes De Niro the set-up man for the dark jokes but who is the straight man to react to his extreme actions? Jones comes around occasionally to wag his finger in De Niro’s face about behaving but the only time he comes close to generating a laugh is when he reacts to the announcement of the movie he and De Niro are about to watch.

Pfeiffer almost plays the straight man when she casually asks him who is going to fix the pipes after De Niro brutally beat the plumber with a baseball bat. However, Pfeiffer’s character has her own anger issues to deal with. Her most noted scene is when she blows up a grocery store after an employee and some customers make fun of her. My favorite moment is when Pfeiffer whispers in the woman’s ear at their party that if she does not put the silverware back that she just put in her pocket, she will break both of her arms. In almost any other movie that line would have been an over-the-top hollow threat. Here I believe she would do it without a second thought.

That leaves the children. They each begin the movie as victims of their father’s lifestyle. The son is cunning and bright as he reads people extremely well, ferreting out ones weakness. The daughter proudly states she is a virgin and will not give it away easily. As both have moved around so often, we could have, and should, been able to empathize with them. However, she gives up her virtue standing up against a door. The son turns out to be nothing more than a mobster in the making. Too bad he could not use his powers of observation to save his sister the emotional distress caused by giving herself to the substitute teacher.

Unfortunately, Besson wrote the entire family as criminals and emotionally off. There was real potential here but without someone to scold or react in horror to De Niro dragging someone behind his car we are left with a family that deserves nothing good.