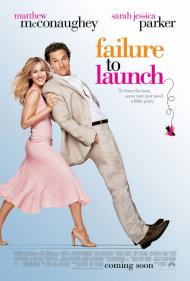 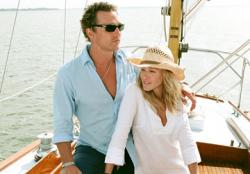 Matthew McConaughey and Sarah Jessica Parker in Failure to Launch.

If you're going to name a movie, "Failure to Launch", you'd better be damn certain that it's going to succeed, otherwise you are destined to hear a litany of puns paraded by film critics on the subject of failure. Unfortunately for the makers of this film, they opened themselves wide for just such pun-filled criticisms; because, while this movie doesn't fail completely, it does fail mostly.

McConaughey stars as Trip, a 35 year-old man who still lives at home with parents (played by Kathy Bates and Terry Bradshaw). Despite having a successful job, Trip finds it convenient to live with them since his mother still waits on him hand and foot and whenever he wants to dump a girl, he simply takes them home to meet his parents and his problem is solved. His parents though, have decided that it's time he moved out on his own and so they hire Lifestyle Interventionist, Paula (Parker), to help motivate Trip into leaving home. Naturally Paula ends up falling in love with Trip and just as naturally, their path to happiness is filled with landmines.

Sarah Jessica Parker proved that she is both funny and beautiful in her hit series Sex and the City. Matthew McConaughey has shown that he has that country boy charm with a cocksure smile and an easy way with the ladies. However, the two of them together in this film are unable to create any sort of chemistry whatsoever. Sure, it's probably more to do with the script than with their abilities as actors, but what ever the reason, a romantic comedy without chemistry is hardly a romance.

The comedy portion of the movie does fare better than the romance, but that's mainly due to the supporting cast, most notably Zooey Deschanel as the irritable best friend. Her character is the bright spot in the movie, which is good for her, but bad for the movie, since her character isn't central to the story, but almost seems brought in for the soul purpose of livening up an otherwise staid and boring romance. In other words, while funny, you could remove her character almost completely without damaging the plot, but it would be a lot less enjoyable if you did.

Occasionally the movie also tries to throw in a little drama, as in the heart to heart talk Trip has with his mother at the end of the film. The problem with the drama is, you'd have to care about these characters for it to work and these people just aren't worth the emotional investment.

You know on second thought, perhaps the film makers didn't name this movie Failure to Launch so that the critics could write puns about it, maybe they were just making an honest assessment of their own abilities when it comes to making movies. 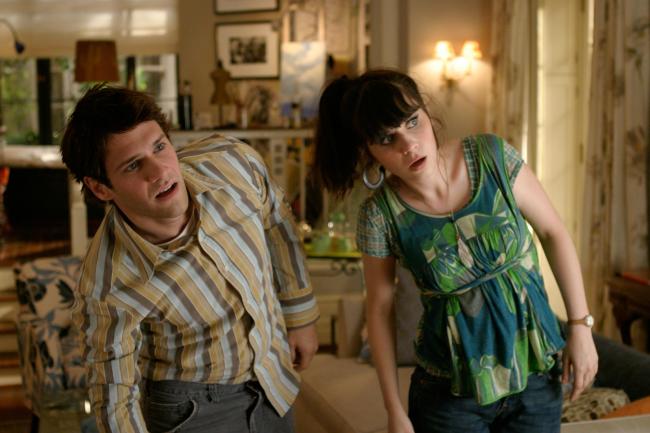 Justin Bartha and Zooey Deschanel in Failure to Launch

A lack of ability indeed! This entire plot, what little there truly is, feels incredibly forced and horribly unrealistic. First of all, the number one reason men stay home or move back home is because of finances. The adult world is expensive. I have read how a large number of men are moving back home with college degrees and huge debt from college loans. Here, it is briefly explained that Trip never moved out because he once got his feelings hurt, which, for me, just makes Trip a really big baby.

Paula and her job as a "Lifestyle Interventionist" makes even less sense. Supposedly she gets men to fall in love with her by feeding them positive motivation, which is intended to inspire them to move out of their parent's home and be independent. Someone explain to me how that works? A guy falls in love with her. He starts to see a future with her. He considers a life away from home and as soon as he acts on it she disappears, leaving him heart broken. Huh? This would only hold water if Paula was a match maker directing other women to draw these men into a relationship/marriage and away from their parents.

Not only are these characters frauds but, as Scott noted, Sarah Jessica Parker and Matthew McConaughey have zero chemistry together. He is country casual and she is city chic. Perhaps a romantic comedy could work between them if they approached it from an opposites attract angle but here we are never shown any solid reason for their mutual attraction.

I also agree that the script does not help. The reason Trip is still at home is explained so quickly that we never really understand it. Without a better explanation of that, we are never really sure why he is so close to the orphan boy, Jeffrey. Then there is the running gag of animals biting Trip. There is a vague suggestion that it is somehow symbolic but that would only work if he kept getting turned down by women he fell in love with. You know, "Once bitten, twice shy." which is not the case here.

Some of the, intended to be humorous, lines are merely groan inducing. McConaughey, "So, is Kit short for Katherine?" Deschanel, "Yes. Is Ace short for... Ace-a-rooney?" And that is hardly a rare example. Parker, "You couldn't be more wrong if you called it a Canadian Goose." McConaughey, "I'll give you a Canadian Goose." Perhaps the writers, Tom J. Astle and Matt Ember, should have read their own dialogue out loud after writing it so they could hear just how amateurish it actually sounds, especially coming out of middle aged actors mouths.

The real shame of Failure to Launch is that it has a truly great cast but they are unfortunately given little to nothing to do. Bradley Cooper and Kathy Bates are completely wasted while Terry Bradshaw is given an embarrassing nude scene. The one time the movie started to work for me was when Justin Bartha and Zooey Deschanel got turned on when trying to kill the devil bird but then the scene becomes pathetically slapstick when they feel guilty about shooting it and try to give it CPR.

Failure to Launch is only worth watching if you are a fan of one of the stars and want to cross it off your "having seen it" list.