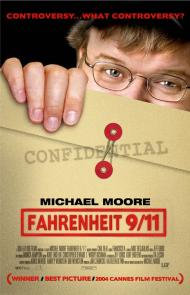 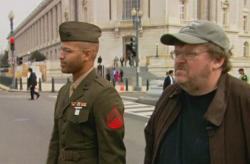 Fahrenheit 9/11, Michael Moore's anti George Bush film, isn't so much a documentary as it is pure propaganda. While it does document events, from the 2000 presidential election until the present day, it does so with such a visible Leftist slant that it seems much more of a personal rant than a fact based film. Apparently, there are two sides to every story, unless Michael Moore is the one doing the telling.

To show that my opinion of Moore's work isn't politically biased, let me assure you that I am a registered Democrat and I will not be voting for George W. Bush come November. But, while I'm not a big fan of our current President, after sitting through two hours of footage which portray the man as a cousin of Satan who values money over lives and with the IQ of a village idiot, I couldn't help but feel sorry for him. Rather than sticking strictly to facts and saying, "Bush did this and so now this has happened," thus showing why someone might rationally not want to see Bush re-elected, Moore wants the viewers of this movie to hate and to laugh at him.

The problem with this approach is fairly obvious. It means that this movie doesn't stand a chance in Hell of changing anyone's mind about our President. It merely preaches to the converted. The only people who are going to like this movie are those people who already dislike Bush. If you're currently a Bush supporter, you won't dislike him after watching this movie, but your opinion of Michael Moore will undoubtedly be lowered.

Reportedly, there were to be some shocking reveals in this movie, but I found little to be shocked about. Is it shocking that the Bush family knows the Bin Laden family? Not when you consider that it would be hard to find any two families at that level of wealth who don't know each other. And are we to be shocked that there is a "Good Old Boy Network" in this country, wherein friends of the President are rewarded? Is Moore trying to say that only our current President has ever done this? Puh-lease! And lastly, it is revealed that Saudi Arabian investments in America make up 6-7% of the American economy, and that this explains why Bush is so friendly with the Saudis. However, the United Kingdom, Germany, Canada, Japan, and France all have larger investments in the United States than does Saudi Arabia. Using Moore's logic, this must explain why Bush gets along so well with the French, right?

Like all of Moore's work, there are some funny moments. There are also those moments where you think, "I can't believe he's actually doing that!" In Bowling for Columbine, that moment was when he took the students of Columbine to K-Mart's headquarters. In this film, it is when he takes to the streets of D.C. in an effort to get Senators to enlist their own children in the military so that they go to Iraq. The problem of course is that Moore is so famous, he only manages to get a couple of Senators to even stop and talk to him.

This country will always need people like Michael Moore. People who stand up and rant against the current administration, no matter what political party is in the White House. The freedom to criticize our government without fear of recrimination is a fundamental part of being an American. However, if Moore wants to be a documentarian rather than a propagandist, he needs to leave his emotions and the petty personal attacks on the cutting room floor and stick to the facts. 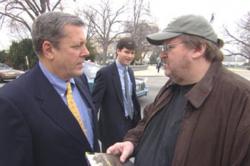 Scott is right that many other Presidents have been members of the "Good Old Boy Network" and/or had close ties with wealthy and powerful families. That's not Moore's point. A member of this particular family (the 2nd richest in Saudi Arabia) planned an attack on the United States that killed 3,000 innocent people. Just a few days after September 11th, 24 members of this family, including siblings of the accused, were allowed to leave the country without even being questioned by the FBI. Who ever heard of a homicide case where family members of the accused aren't even questioned? And this was the deadliest attack ever to happen on American soil!

Scott's point that the United Kingdom, Germany, Canada, Japan and France all have more money invested in the U.S. economy than Saudi Arabia is also irrelevant. First of all none of those other countries has as intimate of financial ties to the Bush family. What do Texas and the Middle East have in common? Oil, of course. And second, no citizen of any of those countries (with the exception of Japan and look what we did to them afterwards) has ever mass murdered thousands of Americans. Keep in mind that this was not some poor slob nobody ever heard of. This was a man with a very wealthy family with ties to the highest levels of power in his country. By far the majority of the terrorists who carried out the events of 9/11 were Saudi's. Means nothing right? Well then ask yourself what would happen if a dozen Frenchmen, led by a member of their countries 2nd richest family, launched an attack like 9/11 against us.

What Michael Moore makes painfully obvious is the fact that Bush is at best incompetent or at worst a leader with some really screwed up priorities. Isn't it obvious to everyone by now that this administration has committed more of an effort to toppling Saddam Hussein than in trying to capture Osama? Compare the numbers alone. At least ten times the number of soldiers and dollars have gone into the war in Iraq than in finding the single deadliest man in the world today. Just ask anyone on the street who they would rather see behind bars. And yet there are more police in Manhattan than American soldiers in Afghanistan right now. Oh well, I guess we just can't find him.

Of course the movie also wants people to laugh at Bush, but then George W. has made himself a tempting - not to mention easy - target by appearing so clueless so often in front of a camera. The look on his face when he is told about the World Trade Center attacks clearly shows a man paralyzed with fear and uncertainty. How else can you explain the fact that he continued reading for several minutes? He didn't know what the hell else to do. Say what you want about Bill Clinton but somehow I don't think he would have just sat there waiting to be told what to do. And when Bush doesn't look like a deer caught in the headlights he comes across as a smug jerk. In one clip he addresses a large crowd by saying "Welcome to a meeting of the haves - and the have mores. Or as I call them - my base."

Moore isn't blaming Bush for 9/11, but he is saying that the President's heart isn't - and never was - into the hunt for Osama Bin Laden nearly as much as it was for Saddam.

Based on my brother's review I expected to dislike this movie. Instead I found it to be clear, concise, emotionally disturbing and powerfully funny.

Of course you liked this movie, Patrick. You are a Bush hating liberal, as is Scott, but at least Scott can separate the movie from the man.

Moore, if he wanted, could make a film about any politician in this country and make them look bad. Politicians make hundreds of speeches and thousands of public statements a year. Moore just needs to collect all the bad sound bites and edit some of the good ones. Then frame them around other clips of related events and then he could present any public figure in any way that he wants.

Moore just chose to take aim at Bush. He could make a film about Kerry. He could interview all the swift boat vets that contradict Kerry's version of events in Vietnam. Moore could give statistics on American jobs that have been moved over seas. He could interview a bunch of poor, unemployed minorities and then talk about the dozen Heinz factories, owned by Kerry's wife, that are overseas. Moore could show Kerry's voting record. Point out all of the missed votes. If he wanted, Moore could have made a film that showed Kerry as a liar who destroyed the American economy. It is all about how he wants to present someone, not at all about facts.

In other words, Moore could make a movie about any one who has spent time in Washington, and make them look any way he wants. As Scott wrote, this is not a documentary it is propaganda.

The one moment in the film that I like was when Moore walked the streets of Washington, pitching military enlistment to Congressmen and Senators. It is a simple, yet very effective statement.