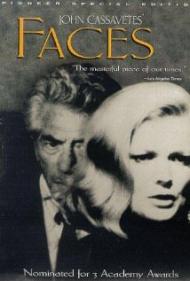 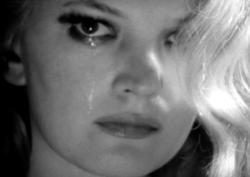 The movie is a series of scenes in which the characters sit around, drink copious amounts of alcohol, argue, converse, and dance. It was mostly shot in John Cassavetes' real house where he lived with his wife, actress Gena Rowlands. Rowlands was three months pregnant at the time the film was made. She plays Jeannie Rapp. She's a real beauty but she is also a lonely prostitute. We aren't given any background information on any of the characters, we discover them as the film unfolds. True to the title there are many closeups of the actors faces.

This film, like many of Cassavetes, was shot in sequence in order to allow his actors to develop their characters. Faces doesn't seem like a scripted film at all. It seems as if we are eavesdropping on real people and real situations. It takes a while to adjust to the style of the film but for the patient viewer the payoff is well worth the time.

The talented cast brings these characters so vividly to life. In addition to Rowlands, John Marley, Lynn Carlin, and Seymour Cassel all give astounding performances. The latter two were nominated for Academy Awards in the Supporting Acting categories (the film was also nominated for Best Original Screenplay). Lynn Carlin (who was also pregnant at the time) is a revelation, especially during the film's disturbing second half.

My favorite performance, however, belongs to Dorothy Gulliver. She began her career in the silent era and kept acting until 1976. She has one scene but makes the most of it. She's an aging boozed up housewife who just wants to be loved and desired. The scene where she dances with Seymour Cassel inspires both pathos and hilarity.

Faces was independently financed, which no doubt explains how they got away with some of the graphic subject matter. It is one of the most influential of all independent films. Its influence can be seen in the work of such diverse filmmakers as Robert Altman and Woody Allen. Faces takes a no holds barred look at the cocktail generation with all its plasticity and disillusionment. It isn't an easy film to sit through -it's a bit like watching a train wreck in slow motion- but it is a completely original work of art that stands the test of time.