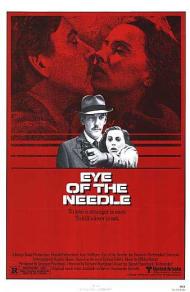 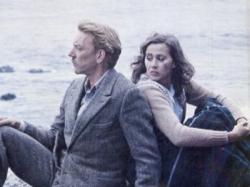 Donald Sutherland and Kate Nelligan in Eye of the Needle.

It's always hard to review a movie that is based on a favorite book and Eye of the Needle, by Ken Follett, is one of my favorite books. Because of that, it's very hard for me to remain objective when I watch or write about this movie. I just can't help but compare it to the source material and by that standard it's nowhere near as good.

In 1944, when the Allies were preparing to invade France, they tried to keep the Nazis guessing as to where they would invade. Would it be in Normandy, with its wide open beaches, or would it be at Calais, the closest city to England? To keep the truth from being known, the Allies perpetrated one of the greatest acts of deception of all time. They built fake warships out of balsa wood. They constructed phony barracks that would look real from aerial photographs. They broadcast fake radio traffic and issued orders to non-existent regiments. They stationed General Patton in East Anglia to give the impression he was leading the invading army. Because of this subterfuge, the Nazis kept their Panzer divisions off of the beaches because they weren't sure where they would be needed. The plot of this movie posits, what if a Nazi spy discovered the Allies' secret?

Donald Sutherland plays that Nazi spy. His name is Faber, but his Code Name is The Needle. He obtains photographs of the fake army barracks and phony planes. He knows that the Army in the East is fake and therefore that the invasion will most likely take place in Normandy. Unfortunately for him, British intelligence is hot on his heels and he is forced to run for his life to Scotland where a German U-Boat is scheduled to pick him up and whisk him and his photographs back to the fatherland.

In the book, this first half is exciting and detailed. Faber is a daring, ice cold and quite deadly spy. He's very good at his job and even though he's a murderer and a Nazi you will find yourself on his side. You don't want him to succeed, but because Follett creates such an interesting and strong character, you don't exactly want him to get caught either.

Faber of the movie is quite a different matter. He's still good at his job, but he's not nearly so threatening. In the book I picture him looking like Jason Statham, but here, as played by Sutherland, he's more effete and not very physically imposing. As an example, in most adaptations Hollywood increases the action, but here it's played down. Faber kills five men during a fight in the book, but here it is reduced to two. I don't think Sutherland could have believably pulled off killing five.

The problem with this first half of the movie is that it races through the plot as if sprinting for the finish line. It condenses the action to the point of seriously diminishing the tension. It also drastically reduces the part of the men who are hunting the Needle by combining the two of them into one and removing all personality from the remaining character.

In the second half of the story, Faber ends up on Storm Island off of the coast of Scotland. He is washed up there during a storm when he tries to take a boat to the rendezvous with the U-Boat. Living on the island is a married couple, their son and an old man. The husband is confined to a wheelchair and is excessively bitter about it. The wife, Lucy, is lonely and longs for physical contact. A contact Faber is only too happy to reciprocate while he recuperates and waits for the submarine.

While the movie rushes through the first half of the story, it stretches out Faber's time on the island, trying to make a true love story out of it. Instead of removing scenes from the story, it actually adds some, including a picnic. We also learn some psychological details about Faber and what makes him tick that are absent from the book. None of the additions are an improvement.

Most of the time I'm complaining about movies being too long, but this is a movie that should have been longer. Or perhaps, better still, should have been made into a mini-series instead. This is a great story with rich characters that need to be fully explored. This condensed version still has some exciting moments, but it needed more character development and background to the story.

I know that I'm biased and that this movie does still manage to entertain. I was just hoping to see a better representation of the book that I love. 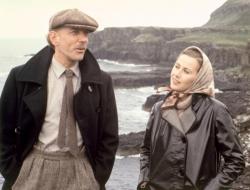 Donald Sutherland and Kate Nelligan in Eye of the Needle

For more than 30 years now I've been hearing about this movie and the book it was based on. I still haven't read the book but I did decide to finally watch the movie. Scott, I understand your disappointment over the fact that they made a few changes in the translation from page to screen. I hate it whenever a favorite novel of mine gets made into a movie and it turns out they've removed some of the best scenes. However, as someone who hasn't read the novel I can say wholeheartedly that I loved this superbly engrossing movie and, as you wrote, you definitely let your bias effect your review.

You didn't even mention just how mesmerizing the performances by Donald Sutherland and Kate Nelligan are. They both give brilliant turns as they make love and then go to war on that desolate island onto which fate has brought them together. In Lucy Rose, the Needle first meets a kindred lonely soul.  Only later does he realize he has finally met his match in terms of sheer determination. As he tells her during the riveting final half hour, “The war has come down to the two of us.”

OK so the lovemaking scenes are cheesy and dated, complete with swelling music and passionate slow motion kissing. Nelligan does a couple of brief nude scenes. Obviously the filmmakers wanted to bring more women to what is essentially a guy movie so it's understandable why they put more emphasis on the romance between Faber and Lucy. I rather liked the picnic scene though and the fact that the movie almost makes you think that Faber can be saved by love. I wasn't sure just how it would play out but instead of being saved by his feelings for Lucy they lead to his downfall.

I think it works better that Sutherland isn't super physically imposing. He still makes one hell of a scary and utterly ruthless spy. By the time he arrives on Storm Island he has been so thoroughly established as a man capable of any act in order to accomplish his mission that it creates a tension that lasts right up till the end of the movie.

Scott, I can't believe you didn't mention how heroic Lucy Rose is. She kicks some serious ass and is right up there with Ripley as a movie heroine. She's a woman that finds she has incredible inner strength and mental fortitude in a crisis. Nelligan is terrific in the scene where she realizes that Faber has murdered her husband and that his death wasn't a suicide as she had previously thought. Watching her go from the hunted to the hunter at the movie's climax had me on the edge of my seat (I apologize for the overused cliche but trust me it's an apt description).

Scott, you once said that it's always better to see the movie version of a novel before reading the book. If you read the book first you will likely spend the entire movie lamenting all the scenes they omitted but if you see the movie first you will enjoy all the extra details once you read the book. I agree completely. In fact I loved this movie so much that I now want to read Ken Follett's book.

Christopher Cazenove as David in Eye of the Needle

I read this novel so many years ago that much of the details are foggy. One thing I recall is that, like Scott, I came to like Faber in the first half of the book even as I rooted for him to get caught. I find Sutherland to be a very good actor but he was miscast as a German spy living incognito in England. As Scott wrote, Faber is a killing machine, but as played by Sutherland he is merely, as Patrick mentioned, ruthless and cold. He is just as quick to kill as the character in the book but by no means as physically imposing.

I suppose that is exactly what the writers were going for with Lucy. She is the movies heroine, and we are intended to like her but this affair speaks poorly of her. She fucks Faber the moment her husband goes to bed. We get that her husband is not meeting her sexual needs but how many women would excuse their husband’s affair due to him being lonely and neglected? Instead of divorcing her husband, Lucy initiates an affair with the first stranger that comes along, a stranger that murders the man she vowed loyalty to.

The moment Lucy asks Faber, “You’ve just seen David?” and he answers “Yes.” is brilliant as she must now start to put things together in her mind. Her husband is dead and the man she has known for a day, and claims to have fallen in love with her, has just lied about seeing him. She does what any woman would do; she has sex with Faber, letting him think everything is alright. If it were not for her lack of loyalty, this woman could be a decent spy. She snuck around on her husband. Faked it with Faber and knows how to handle a gun.

The most sympathetic character in the film is the put upon David. When we first meet him he is a happy, carefree Royal Air force pilot on his wedding day. Before he can even start to enjoy his honeymoon, he gets into a car accident and becomes paralyzed. Luckily he and Lucy did not wait for the honeymoon to have sex, or they would never have had a child. He becomes depressed, his wife has an affair and her lover kills him. I would have liked for his character to have lived somehow.

Scott felt the second half dragged out while I felt it left things unexplained. Did Faber actually fall in love with Lucy? Did she have any real feelings for him prior to discovering the truth? He does not kill her when he has the chance while she begs Faber to stop running at the end so she does not have to shoot him. Sutherland plays Faber as if insane and stupid.  You have to be insane to kill so easily and stupid to think that a woman offering her body is the same as a woman offering her love.

Even though it takes some liberties with the book and Sutherland was not ideally cast, Eye of the Needle remains a fantastic movie. I was caught up in the chase and was truly sad when Faber killed Billy four years after explaining to Faber, with youthful exuberance, how desperate he was to join the military. The ending is as thrilling and exciting as they come.