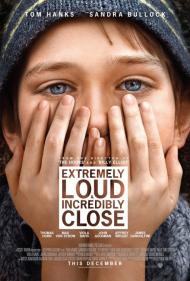 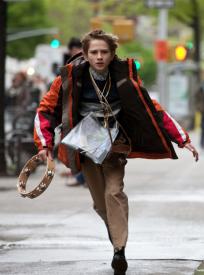 This over the top piece of Hollywood melodrama feels completely staged. It works overtime to bring tears to your eyes, going to excesses when it should have shown restraint. Every frame seems designed to try and elicit an emotion but hardly any of them feel genuine. It's just pure Hollywood mush.

From the bestselling novel (which I've never read, but which has to be better than this mess), the plot tells the story of Oskar Schell whose father, played by Tom Hanks, died in the World Trade Center on 9/11. Oskar is an odd kid who mentions that he was once tested for Asperger's syndrome and the tests weren't conclusive, but he definitely exhibits traits of the condition. He's obsessed with facts and organization while having difficulty relating to others. He finds a key inside an envelope in his father's closet around a year after his death and becomes obsessed with finding what it unlocks. Written on the outside of the envelope is the word Black, which Oskar takes to be a name and so decides to search out every person in New York with the last name of Black and ask them if they knew his father.

Along the way Oskar meets a lot of people, including an old man who can't speak (von Sydow) who has a fairly obvious connection to Oskar, although it takes a while before the movie comes out and admits the relationship. There's plenty of moments of staged emotion along the way designed to get the criers in the audience reaching for their hankies, but for the more cynical among us to roll their eyes at as far too many strangers open themselves up to this strange little kid.

The acting is decent enough, but like everything else in the movie, is over the top. Thomas Horn does an alright job as Oskar, but spends too much of the movie trying to look concerned by furrowing his brow, which just makes him look constipated. He's better in the broader moments when he must summon tears, but suffers in the quieter moments.

Hanks has just a small part in flashbacks and his only job is to be the ideal dad for Oskar and subsequently comes across as very stagey. Only von Sydow manages any subtlety and maybe that's because he never says a word, but conveys his emotion with written notes and the words Yes and No that written on each of his hands. Bullock is mostly absent from the film until an 11th hour reveal that is yet another attempt to wring some more tears from the audience.

If the point of this story was to offer some kind of emotional resolution for the audience it fails. It's just a series of staged moments designed to manipulate emotions. There's nothing real, deep or meaningful in any of it. 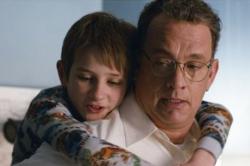 I agree that the plot missteps several times and the subject is very manipulative.  However, it worked on me.  I am not ashamed to admit that I cried several times.  I found it very therapeutic.  As a father of two sons, how could I not be touched by this film?

Scott, the key line in your review is that Hanks is playing, "...the ideal dad for Oskar."  He and Oskar have a relationship based completely on understanding.  Thomas knows when to challenge Oskar and how to talk to him, although I do think Oskar is too old to believe the 6th Borough story.  His dad's passing created a huge void in his life.  He goes on the journey of the secret of the key to try to desperately keep a part of his father with him.

Here though, is where the film goes wrong.  Through his quest, he ends up touching people.  By revealing the tragedy that has befallen him, others seem more appreciative of what they have.  Much of that journey was taken with his grandfather, when it should have been taken with his mother.

I know the story is trying to make some big statement about uniting people, but having Bullock be in those scene would have been more realistic and emotional.  She has a couple of good scenes, such as when she stares out the window at the smoke emitting Twin Towers and begs her husband to get out.   However, having her let her phobia filled son wander all over New York is not an honest portrayal of a concerned single mother.

Thomas Horn is decent, but not great.  His scene of listening to his father's phone message, while the news of the towers plays on the television behind him is a powerful scene.  It has more to do though with the way it is directed than Horn's performance.

Max von Sydow brings some serious gravitas to his scenes.  With a glance or a change in posture, he says more than Horn can say in a paragraph of dialog.  Although he is great, his part was not needed, as Oskar connecting to his mother should have been more of the focus, instead of Oskar meeting a bunch of strangers.  Although she shows Oskar she is his ideal mother, her method did not seem at all believable. 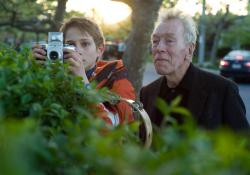 There isn’t a genuine emotion in this sap-filled, contrived Hollywood mess. Eric, I’m surprised you didn’t jump all over it for glossing over the fact that Oskar’s father was murdered on 9/11. The script has Oskar say his dad simply “died” on what he refers to as “the worst day”. There is absolutely no anger expressed towards the terrorists that committed these heinous acts of war. I can just imagine how much different your review would have been if George Clooney had played the Tom Hanks role.

Eric, I disagree that Oskar’s mother should have accompanied him on his quest. It works better with his grandfather, since the dead father is the link between them. Oskar is symbolically spending time with the father his father never knew. And from an entertainment standpoint Max von Sydow is a more talented actor, playing a more interesting character than Bullock is as the mother.

I agree that her eleventh hour reveal is ridiculous. And trust me, as someone who has walked between Manhattan and Brooklyn many times, it would take this kid all day just to get to some of these outer-borough neighborhoods. I seriously doubt he would have the stamina for it, except of course in a Hollywood movie or a pulp novel.

Just how Extremely Loud and Incredibly Close garnered an Oscar nomination for Best Picture is beyond me. I guess Hollywood has a different take on 9/11 than most New Yorkers do. Not one person I have talked to about this movie that lives in New York has had anything positive to say about it. I don’t either, come to think of it. It’s mawkish cinematic rubbish.