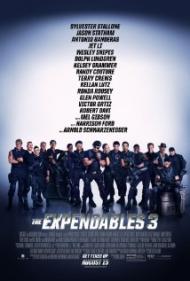 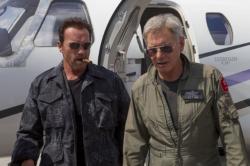 Arnold Schwarzenegger and Harrison Ford in The Expendables 3.

The first 2 Expendables films managed to mostly succeed with lots of action and a hefty dose of nostalgia provided by the presence of several 1980s/1990s action stars. The first film took itself too seriously, while the second film seemed to be in on the fun and played up the laughs with plenty of in-jokes. This third film veers back toward the more serious tone of the original film and goes against the original appeal of the series by including a younger, mostly unknown crew for a good portion of the story.

Plot is never key to these movies, as the point of them is simply to allow old school action stars to blow things up. The plot is just there to provide an excuse for those explosions. And that excuse this time is that international villain and arms dealer Conrad Stonebanks (Mel Gibson), who years ago co-founded The Expendables with Barney (Stallone), turns out not to be dead as believed, and so Barney sets out to bring his old partner down with the help of Drummer (Harrison Ford, replacing Bruce Willis who demanded a larger paycheck than Stallone was willing to pay), his new CIA contact. Other new faces to the series include Wesley Snipes, Antonio Banderas, Kelsey Grammer and younger "stars" Kellan Lutz, Ronda Rousey and Victor Ortiz.

The action is just as rampant as in the first two films, but less graphic and bloody to obtain a PG-13 rating. This safer rating doesn't stop Stallone's team from battling an entire army while blowing up lots of shit. However, like the earlier films there's never really a sense of danger. These guys are indestructible and capable of such over-the-top action antics that you know nothing will happen to them. Unfortunately, Barney spends a good portion of the movie behaving as if he believes otherwise, and disbands his team and hires a new younger one to go after Stonebanks, because he doesn't want any member of his old team to get hurt. He only wants to go into battle with a team he doesn't care whether they live or die. Given that it's the old stars and not the new mostly unknown ones that audiences are coming to see, this feels like a mistake. Apparently with that lower rating and a younger cast, Stallone is aiming to bring in a younger audience.

Both Steven Seagal and Nicolas Cage were reported to be attached to the film at different points, but apparently their deals never panned out. Clint Eastwood was also offered a part, but he turned down the chance to appear. The inclusion of Ford and Gibson comes as something of a surprise. While both icons of their era, they were A-list stars while most of the cast is made up of strictly B-listers. Gibson makes a good villain. One of the few moments of tension comes when he threatens Stallone while handcuffed in a van. He's the one who has been captured, but his threats feel real. Unfortunately, by the end he turns into your typical villain who doesn't know when to shut up and shoot. Ford is fine, but it's obvious he's working for the paycheck here. He's had a late career resurgence as a character actor recently, but this is him going through the motions. The real surprise is Antonio Banderas as Galgo. He never shuts up and in doing so provides some of the film's funniest moments.

Another recurring theme of these movies are its inside jokes. There are several here, including references to Snipes' income tax problems, another famous quote from a Schwarzenegger movie, and a nod to the departure of Willis from the series. A few more of these lighthearted moments would have been welcome.

The big losers of the story are Statham, Lundgren and the other members of the old crew. Their parts are greatly reduced as they are replaced by Lutz, Rousey, Powell and Ortiz. The bonus of featuring old time action stars is they bring built-in characterizations. The audience cares about them as soon as they show up because we already know them. The new characters carry no such weight. They're presented with generic back stories, but we care as little about them as Barney seems to.

There are some enjoyable moments, but this series is just about out of gas. Hulk Hogan and Pierce Brosnan have both mentioned being approached to appear in a 4th installment. However, adding new faces isn't going to save this franchise. It needs new writers and some fresh air to resuscitate it. 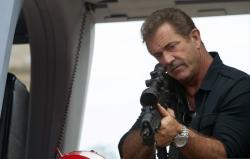 Mel Gibson in The Expendables 3

The fun of The Expendables films is seeing some old has been movie stars back in action. I found it awesome seeing such movie titans as Harrison Ford and Arnold Schwarzenegger sharing the same screen. Like Scott, I also liked the in jokes, such as Ford explaining to Sylvester Stallone that Bruce Willis’s character is, “…out of the picture.”

I am a big Ford fan but he is not the best new (old) face. Mel Gibson makes a great villain, shutting down Stallone and Kellan Lutz when handcuffed in a van. His verbal threats are far scarier than any gun shot or explosion in the film and there are plenty of those. It is the single best scene in the entire film. Antonio Banderas is also a scene stealer never stopping to take a breath, let alone shut up.

I agree with Scott that Gibson and Banderas are the best things about the entire film while the younger cast member’s only distinct personality trait is that they are younger than the old farts. I do not object to the young actors being added to the cast. John Wayne’s later westerns often featured a young male co-star for demographic reasons. The problem is that their screen time sacrifices that of the veterans. A better idea may have been for the old pros to each be paired with a newbie, thus providing some opportunity for jokes about age and point of references. There are a couple of such jokes here but not enough to create much interest.

The dialogue is cheesy and unworthy of even a superhero movie. Wesley Snipes, referring to Jason Statham’s character Christmas, who enjoys knives as much as him, says, “I'm the knife before Christmas!” A line intended to be cheered is actually groan inducing. Gibson reminding Stallone that he is supposed to take him alive so he may face a court, says, “What about The Hague, huh?” Stallone responds with great seriousness, “I am The Hague.” The best line is when Schwarzenegger repeats in his famous accent, “Get to the choppa!”

The overall script is weak, reduced in its simplest form to a series of shoot outs. The action scenes are executed well enough but there should have been some elevated tension such as the death of one or more of the cast members. Much of the movie speaks of death, acting as foreshadowing that never comes to pass. One person gets severely wounded but, for some reason, the writers backed away from actually killing him off. Had he died, the rest of the film would have held a tad more sense of danger and the film would have lived up to its title. 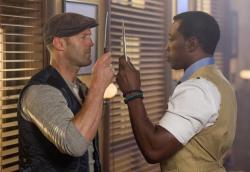 Jason Statham and Wesley Snipes compare knives in The Expendables 3.

I really disliked the first Expendables but I enjoyed the second one. Like Scott wrote, the first one took itself too seriously while the sequel played up the self-reverential laughs. This one tries to do both without fully committing either way. I still liked it better than the first movie but not as much as Expendables 2. As mentioned previously, the violence in Expendables 3 is noticeably less graphic than in its predecessors. It lends the movie an old-fashioned feel that fits with the era in which most of its star were at their peak. With a tighter edit (it's at least 20 minutes too long) and a few more laughs I would have called this my favorite installment in the franchise.

Unlike my brothers I enjoyed the new additions to the crew and I thought the script did a pretty fair job of spreading the action around. If nothing else the younger actors bring some much-needed eye-candy to the proceedings. Staring at all those grizzled old mugs for two hours gets to be a bit depressing after awhile. Harrison Ford looks particularly worn out. At 68, Stallone keeps expanding the boundaries of age in terms of playing a viable action star. He pushes himself harder than he does many of his younger costars. He's still in the thick of it and still pulls it off. Schwarzenegger is a year younger than Sly but now seems several years older.

I'm surprised neither of my brothers mentioned the inclusion of the first female member of the Expendables. MMA champ Ronda Rousey brings some estrogen to this testosterone fueled show. Kelsey Grammer (why the hell is he in this movie?) gets one of the funniest lines when he brings Stallone to meet her at a night club. After watching her kick some serious butt Stallone says, “I can do that.” Grammer quips, “Wanna slip on a dress and give it a try?”

I will echo Scott and Eric as far as Mel Gibson and Antonio Banderas are concerned. They are both scene stealers. Gibson's bad-ass, I-don't-give-a-fuck screen persona makes a formidable villain. His off screen reputation certainly doesn't hurt his ability to play the bad guy. Banderas is quite funny as an incessant chatterbox with a bit of an inferiority complex. He plays one of the more compelling characters in a movie filled with walking, talking cliches.

As much as I generally dislike sequels, I don't think this series has completely run out of gas. Not yet, but the needle is definitely on red. By the time number 3 runs out of steam at the box office the franchise will have grossed approximately three quarters of a billion dollars worldwide. Not bad for a bunch of old farts. Not surprisingly then, two more installments are already reportedly in the works, as is a distaff version called The ExpendaBelles, possibly starring Meryl Streep. Just in case anyone is keeping score the only actors to appear in every Expendables movie so far are Sylvester Stallone, Jason Statham, Jet Li, Dolph Lundgren, Terry Crews, Randy Couture, and Arnold Schwarzenegger.

The Expendables 3 lived up to my expectations by being solidly mediocre. 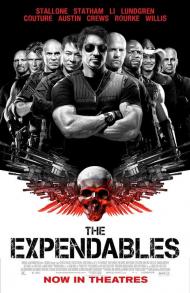 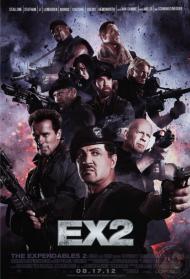