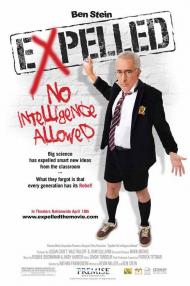 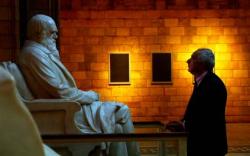 I put off watching Expelled as I thought this a dead subject.  Has it not been 100 years since the monkey trial?  After watching the film and searching the net, it seems the debate between evolution and intelligent design still causes strong reaction in people.

Ben Stein starts the movie talking about freedom of speech in the United States.  He then interviews professors from around the country who claim they were fired from their jobs for discussing or writing about the possibility of intelligent design.  There is little to no proof to support their claims, but all of them lost their jobs and all of them at one time put out a question of ID.  Expelled contends that evolution is the accepted "truth," taught in schools at all levels of academia, while intelligent design is a firing offense.

Ben Stein travels all over the United States and Europe interviewing the intelligentsia on the subject.  The debate is not which is right and which is wrong.  The question Ben Stein keeps asking is why is ID so easily dismissed when the theory of Evolution is in fact just that.  He asks many "experts" on the subject to explain to him how creation began.  The smart ones just say they do not know, to which Stein then interjects that if we do not know then why are we eliminating one possibility, intelligent design.

Some of the more arrogant proponents of evolution give answers such as we started as cells on the backs of crystals.  Noted evolutionist Richard Dawkins gets the question put to him by Stein.  At first he says he does not know, but later says, "Well... it could come about in the following way: it could be that uh, at some earlier time somewhere in the universe a civilization e-evolved... by probably by some kind of Darwinian means to a very very high level of technology and designed a form of life that they seeded onto... perhaps this... this planet. Um, now that is a possibility. And uh, an intriguing possibility. And I suppose it's possible that you might find evidence for that if you look at the um, at the detail... details of our chemistry molecular biology you might find a signature of some sort of designer."

Dawkins acknowledges the theoretical possibility of intelligent design as long as it is not "God."  This and other discoveries by Stein, lead him to suggest that evolutionists are not about finding facts so much as they are merely anti-religion.  At countless times in history, if you did not believe in the major religion of the time and place, you could be tortured or killed.  Today if you suggest the possibility of intelligent design you can be dismissed or fired.

Stein goes on to link Darwinism to Nazism.  Claiming Hitler tried to encourage natural selection by having what he saw as the unwanted of the world killed.   Stein even links Darwinism to Planned Parenthood.  To help lighten the mood, clips from old educational films and Hollywood movies are interspersed to emphasize a point in a humorous way.  Expelled is a bit slow.  It is just a bunch of old guys spouting philosophy.  Each trying to sound smarter than everyone else.  Ben Stein most of all.

The most legitimate question for me is, why is evolution so easily accepted and intelligent design scoffed at when there are no actual facts to support either.   None of us were there at creation.  The missing link is still missing.  What caused that big bang anyway?   Perhaps both are real?  Perhaps neither is?  Either way, believe what you want.  What is the harm in allowing all possibilities to be discussed?